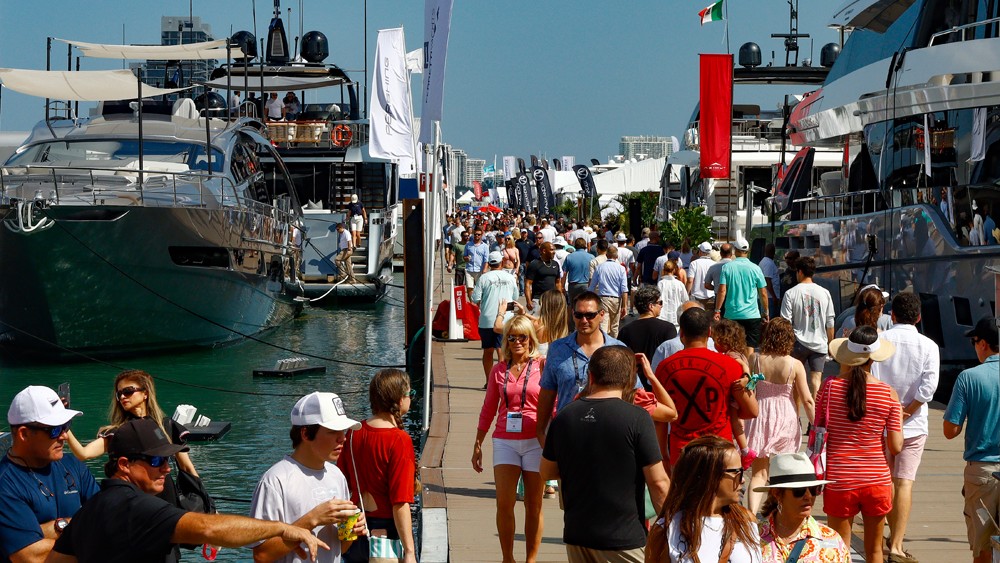 Andrew Doole, president of Informa, organizer of the 2022 Discover Boating Miami International Boat Show, wasn’t exaggerating when he said show-goers would remember this year’s event for its “magnificent” scale. “I think it was the most successful selling show we’ve ever had in Miami,” Doole told Robb Report after Sunday’s close.

While that sounds like marketing hype, the buzz and crowd sizes observed during the show’s first four days should bode well for sales. Most exhibitors we spoke with were also upbeat about the show, and while a few reminisced about the good old days when the yacht show was located at Collins Avenue on Miami Beach, most seemed happy with the new format. With five locations—including the newly renovated Miami Beach Convention Center which was fresh from a $620-million makeover—this year’s Miami seemed to justify Informa’s title of the “The Largest Boating and Yachting Event in the World.”

After two years of the global pandemic, which started shortly after 2019’s Miami show, the boating feeding frenzy shows no signs of slowing down. The industry continues to report record-high sales across all categories, from personal watercraft to superyachts. A number of brokerage firms have been sold out of yachts for months. Some were at the show taking names for when inventory starts to look something like normal again. Despite inflation and rising fuel prices, nobody is hearing panic bells from prospective buyers.

Despite blustery days on Wednesday and Thursday, the docks were filled at Herald Plaza, which housed the motoryachts from 35 to 135 feet. “I’ve never seen a better opening day at Miami,” Justin Joyner, Beneteau Powerboats’ sales manager, told Robb Report.

At the Convention Center, more than 1,000 vendors—from fishing lure sellers to Cigarette Racing with its rock-concert-style display—catered to the crowds looking at production boats. At Island Gardens, where the superyachts are based, the crowds were thinner, and most of the yachts on display were brokerage boats.

With its mid-season dates, the Miami show has never been a major event for new-model introductions. This year was no different. A handful of US builders, Boston Whaler, Invincible, Scout and Formula, introduced new models while others like Leopard’s 46 Powercat and Beneteau’s ST48 Swift Trawler were global launches. Other European-built boats like the Pardo E60, Azimut 68 Fly and Ferretti Yachts 500 weren’t launches, but were being shown in the US market for the first time.

The convention center in Miami Beach, which hadn’t hosted a boat show in six years, had 1,000 exhibitors.  Courtesy Howard Walker

Tiara Yachts announced its new EX 60 flagship, which should make its physical appearance later this year. “After several years of building outboard-powered models, this is a return to the Tiara heritage of inboard cruisers,” Tiara’s Dena Meiste told Robb Report. “This will be our biggest boat yet, and with three staterooms, it will put more focus on staying aboard for longer.”

Its design highlights included drop-down side sections to increase cockpit space, and a choice of four “alfresco” cockpit layout options.

With the Miami market being the originator of high performance, “Miami Vice”-style boats, local builder Midnight Express unveiled its polarizing new 52 Vitesse rocketship. “We’ve already sold eight boats, and this is only the second day,” Lesly Puentes, Midnight Express marketing director told Robb Report. “It’s the boat many of our customers have been waiting for.” Priced around $2 million, the 52 Vitesse comes with six Mercury 450 Racing outboards, with the option of six V12 600s.

Sunseeker also displayed its 65 Sport Yacht at the show. CEO Andrea Frabetti told Robb Report that the company now has a $700-million order book and has invested $50 million in developing new models. Since Frabetti arrived in 2019, the U.K. builder has launched 11 new models, doubling its model line. It plans to debut four more boats this year and five next year, with four more each year for 2024 and 2025.

Its Ocean line of superyachts is the latest in the Sunseeker range, with a new 100 under construction. Frabetti says that this model “will be something entirely new for the industry.” A sub-90-foot model is also being developed for the Ocean line.

Sunseeker’s 65 Sport Yacht was one of the brand’s US premieres.  Courtesy Sunseeker Yachts

By 2025, said Frabetti, none of the models sold in 2020 will be in the line. They will either refreshed or replaced by new models. Sunseeker said its U.S. market share has increased by 20 percent in the last two years.

Competitor Ferretti Group, which showed its new Ferretti Yachts 500 in Miami, has also had an ambitious product rollout over the last three years, with 27 new models. It plans to debut seven new models in the next two years. It said that North America accounted for 25 percent of its global revenues, up ten percent over 2020. The company announced it was renovating a new luxury showroom in Fort Lauderdale, with an open, residential feel that includes boat slips. It also announced a new partnership with WatchIt, a system for collision-avoidance, that it will use across its seven brands.

Its Riva brand will launch a new 68 Diable later this year, and is developing a new yacht called the 130 Bellissima, which will be the second-largest Riva in the line, behind the 50 Metri. The Ferretti Yachts’ 500 at Miami is now the entry-level for the brand and it also plans to debut the 860 later this year. With the Pershing line, the company intends to introduce the GTX 116, which it’s referring to as a sport-fly cross-concept. The GTX will be the largest of the new series in Ferretti’s performance luxury line.

The Pershing GTX 116 will be the start of a new segment for the Ferretti Group brand.  Courtesy Pershing Yachts

Its Wally brand will have a 58-footer in the new wallypower line and a custom 101-foot Wally sailing yacht is under construction. Ferretti’s Custom Line motoryacht range made 16 deliveries in 2021, with five of those in the American market. Its new 140 will be delivered later this year.

Ferretti’s custom superyacht brand, CRN, has five superyachts under construction, with three sold to American clients. Three are set to be delivered this year.

One of the most interesting collaborations at the show was a mixture of new and old school—Pardo Yachts of Italy and Lift Foils from Puerto Rico. The Italian yacht builder showcased its new 60 at Miami’s Herald Plaza location, also displaying Lift Foils’ new Lift3 series of electric foiling boards. Nick Leason launched the company in 2010, and over the past three years, has seen the category grow dramatically. Lift Foils builds four e-boards, from its 4’2” Pro Foil aimed for expert riders to the 5’9” Explorer, a much larger board for novices and beginners.

Lift Foils was at the show to promote its electric foiling boards as a new type of toy for yacht owners.  Courtesy Lift Foils

“We’re starting to see growth in the yachting sector as they realize what e-foiling boards are all about,” says Leason. “They see that they can cruise on these boards for extended periods and explore areas that aren’t that accessible for other boats. Plus, they run silently.”

French manufacturer Groupe Beneteau didn’t announce the global reveal of the latest addition to its hugely popular Swift Trawler lineup, the Swift Trawler 48, until the show’s opening day. Because of a shipping nightmare, it was literally offloaded from a transporter days before. Other builders from Europe also said they could not get models through the Port of Miami in time for the show.

Based on the ST47, this new 48-footer—priced from $920,000—has had a major interior redesign to reconfigure the salon and cabins. It also has the option of 425 hp Cummins diesels to push the top speed to around 28 mph.

Doole didn’t have exact attendance figures, but thinks that 100,000-plus visitors walked through the gates at all five locations. Despite some boatbuilders canvassing to return the yachts to Collins Avenue, how venues will remain where they are now. “We’ll meet with exhibitors and get their feedback,” he said. “There will definitely be some tweaks, like water taxis to Miami Beach, but generally the show will stay the same.”