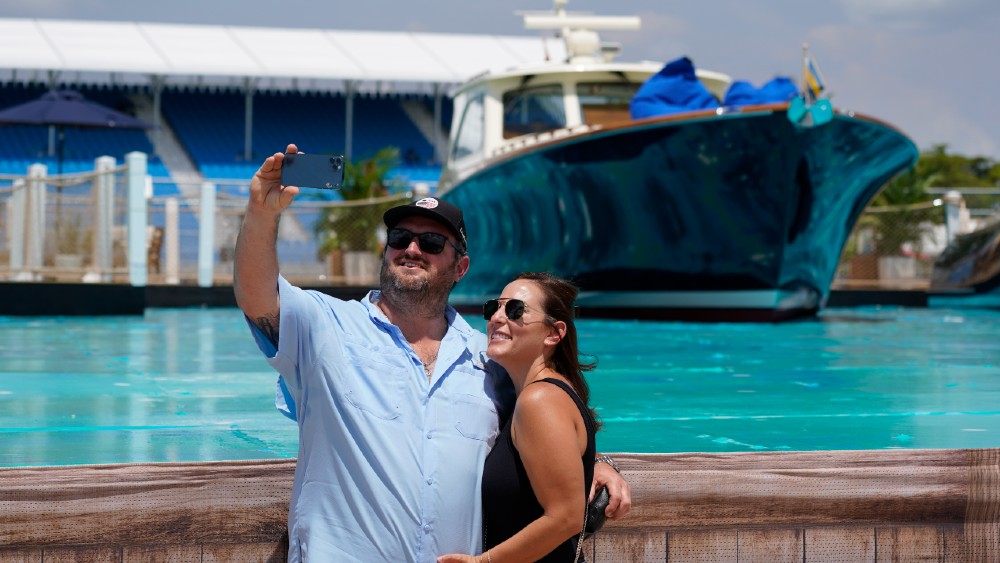 The most-remembered visual from last weekend’s inaugural Miami Grand Prix won’t be Max Verstappen holding up the winner’s trophy. It won’t even be the Schumacher-Vettel crash. It’ll be the impossibly aquamarine waters around the Mia Marina, between turns 4 and 6, that instantly gained fans, foes, memes and even labels of “sell-out” to F1’s heritage. But last weekend’s sell-out refers to attendance. The event was indeed sold out, with more than 240,000 fans passing through the gates.

Mia Marina could’ve been imagined by Disney. And it made perfect sense being located near Hard Rock Stadium. The landlocked “marina” was much closer to the airport than South Beach. The marina had 10 real boats on trailers, surrounded by 25,000 feet of plywood that came up to their waterlines. The plywood was then covered with a vinyl decal to look kinda-sorta like turquoise water.

The complex had docks, real sand around “The Beach Club,” a gondola for transport, and an “Azimut” boat shed that looked like the Italian yacht builder’s booth at the Miami Yacht Show. “The Yacht Club,” as it was known in the paddock, had tickets priced from $9,500 to $38,000.

Even the crashes were memorable because they happened near the fake water.  Courtesy F1

When Miami was considered as a possible F1 venue four years ago, the organizers imagined a location like Monaco, with narrow streets winding through the city’s harbor, and yachts as the backdrop. F1 wanted those yachts and that beautiful water transplanted to Miami.

Tom Garfinkel, vice chairman of the Miami Dolphins and the Hard Rock Stadium, said that his group had considered downtown Miami, but that it wasn’t feasible to run the racetrack through it. So, they moved to plan B. “If they want a marina, we’ll build one,” said Garfinkel.

When they did, the memes started.

The organizers were helped by the fact that F1, owned by US-based Liberty Media, is the hottest event in the country right now. That is, in some part, because of the Netflix series “Drive to Survive.” Miami attracted record crowds for the F1 series and side events last weekend. The Mia Marina also had its share of celebrities, ranging from Michelle Obama, George Lucas, Greg Norman, Michael Strahan, Michael Jordan, David Beckham, Serena and Venus Williams, LeBron James, Pharrell Williams and comedian James Corden.

Before Miami came along, Austin, Texas, was the only F1 race in the US. It took years to grow, but last year’s event drew more than 300,000 spectators in three days. That record attendance is good news for Miami’s Grand Prix, already on the books for 2023. The Las Vegas strip will also be added to the F1 calendar next year.

The “marina,” as it looked in January.  Courtesy F1

The Grand Prix in Miami was limited to 85,000 people per day to create a high-end experience, with the freedom to walk around the Yacht Club and the grounds.

Garfinkel has high hopes for the event going forward. “I don’t know there’s another stadium in the world that can say they’ve had Serena Williams, Roger Federer, Lewis Hamilton and Max Verstappen, Patrick Mahomes and U2 and Jay-Z and Beyoncé and Messi and Neymar all at the same venue.”

But the biggest question for next year: Will they add more boats to the marina?