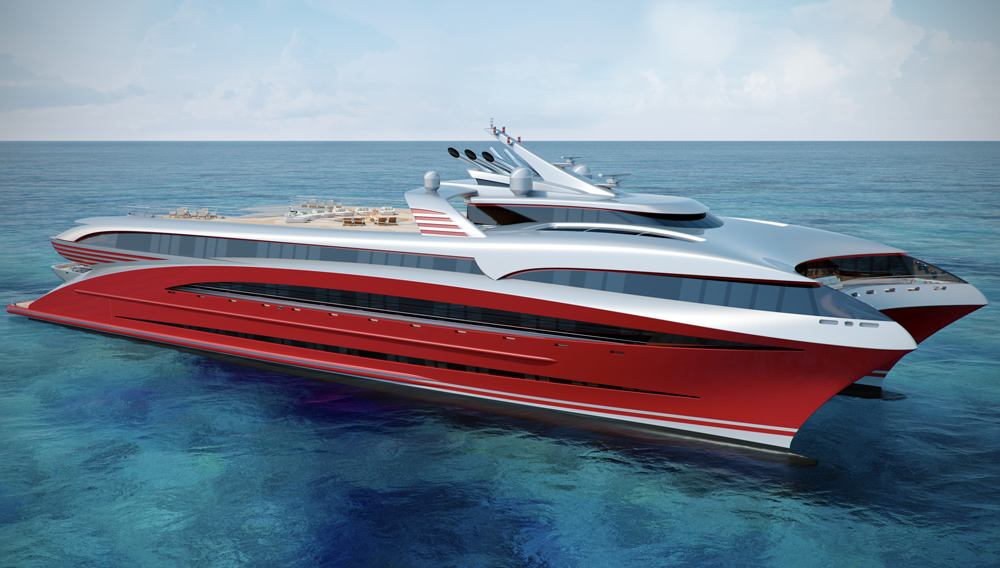 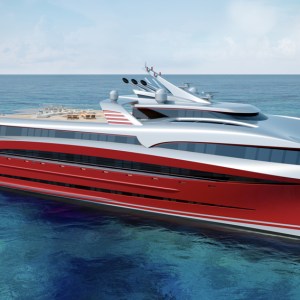 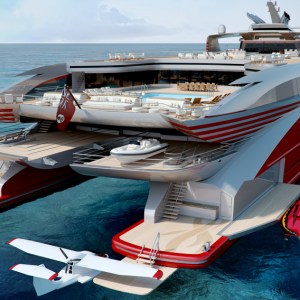 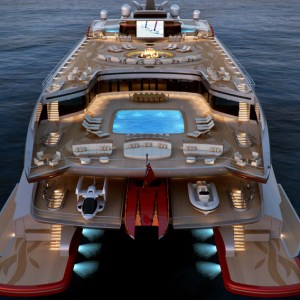 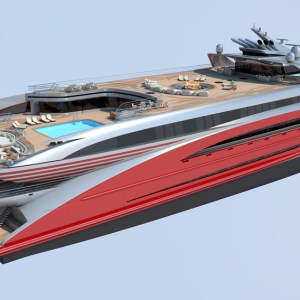 At first glance, the 278-foot ModCat Project L3, developed in a collaboration between the naval architects at BMT Nigel Gee and the yacht designer Rob McPherson—who has received a lot of attention lately for his firm’s work on the innovative Dragonship sailing trimarans—could be mistaken for an alien spacecraft. With this concept, the designers’ goal was to push the boundaries of catamaran design: The yacht had to be not only spacious and luxurious, but fast. The resulting concept features a long, lithe red hull that handles ocean chop with ease and helps reach speeds of in excess of 40 knots—remarkably fast for a vessel this size.

Project L3 is interesting from all angles, but its stern seems to hold the most potential for water lovers. Matching retractable beach areas sit on the sides of the massive hull, and above them is a separate deck for a high-speed rigid inflatable boat, a racing catamaran, and a two-person seaplane. The main deck features a full-size swimming pool, sun lounges, and an alfresco bar, while the bridge deck has a generous open-air fire pit surrounded by chairs and a drop-down cinema screen.

The yacht has a swept-back profile and plenty of sharp angles, giving it the appearance of being in motion even when at anchor. The design team decided to add the ruby-red exterior to enhance its high-performance look. Twin water jets will push the catamaran to its top speed, but even equipped with traditional diesel engines, it should still be able to reach 20 knots.

The secret to Project L3’s performance is its hybrid catamaran hull. Designed for the U.S. Navy, the ModCat hull matches the high performance and low power needs of a traditional catamaran with exceptional seaworthiness. The U.S. Navy’s 279-foot Sea Fighter, which can reach speeds of 55 knots, uses this design. “We found it refreshing to integrate technology developed in other markets into this yacht design,” says James Roy, BMT’s design director. “It will take a visionary client to bring this project to life. It challenges convention.”

Roy says that Project L3 has the same amount of interior space as a monohull yacht that is 80 feet longer. Since it is a custom project, owners will be able to design the interior to their own specifications. Given the 81-foot beam, the owner’s suite would most likely be a palatial waterside cabin with unrivaled views of the water. (bmtyachts.com)