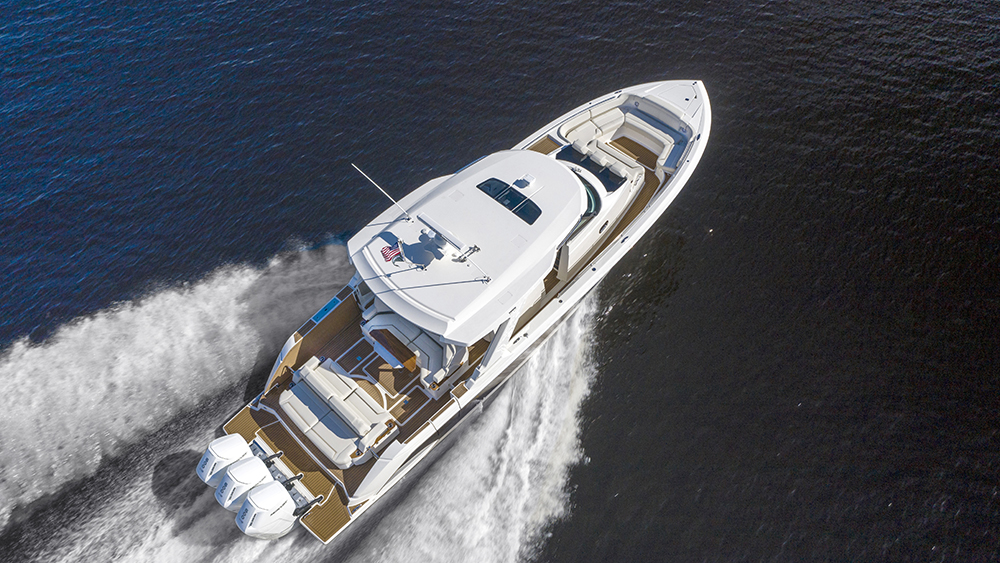 The concept of modular yacht design came to life in 2011 with the Wider 42, which featured sides that could be folded over the water, transforming into swim platforms while doubling cockpit space. Now a trio of just-launched sport yachts shows how far the multi-tool philosophy has evolved.

“The concept of modularity excites us because we give the customer more for less,” says Andrew Bartlett, design director for Tiara Yachts. Bartlett points to the “Euro-chaise” on Tiara’s new 48 LS, a beefy, nearly full-beam lounge which can pivot into multiple positions, up to 180 degrees, while moving fore and aft. Facing aft, it’s a launchpad for swimming or sunning; turned forward, it fits snugly against the cockpit table for alfresco dining. “With a simple turn, you increase the size of the teak beach in back,” he says. “This single feature can alter the boat’s layout dramatically within the same footprint.”

Formula Boats’ 500 SSC is the largest, most sophisticated sport yacht in the US builder’s line, and features electronically actuated overhead panels, to open the ceiling at the push of a button, and sliding doors and windows for panoramic deck views. When weather rolls in, the Formula buttons back up in seconds. The 500 SSC also incorporates removable tables in different areas, plus modular stools in the galley, to allow for the spontaneous creation of onboard social zones.

Another quick-change artist is the Swan Shadow. Incorporating the elegant lines of the Finnish builder’s race-bred sailing yachts, the 43-footer is the first motor yacht built with the Swan brand name. The boat’s lead designer, Jarkko Jämsén, says “a lot of thought went into the lifestyle and different use cases,” which mean a helm area that can be configured either open or closed, and “a bolt-on system that allows for multiple furniture layouts.” The Shadow works as an open-deck tender for a Swan sailing yacht, a stand-alone day boat with lounges or a sportfishing vessel. The multi-use swim platform can also lift into three positions.

Formula’s 500 SSC has a retractable roof and rear glass panels that open fully, or button up in seconds.  Tod Martens

Beyond versatility, all three boats are designed for performance. With triple 350 hp outboards, the Shadow has a projected top speed of 63 mph, while the larger Tiara will still hit 60 mph thanks to its trio of 600 hp Mercury Verados. And the Formula, with its four Verados, reached nearly 70 mph during Robb Report’s recent visit to Mercury’s secret Lake X testing facility outside Orlando, Fla.