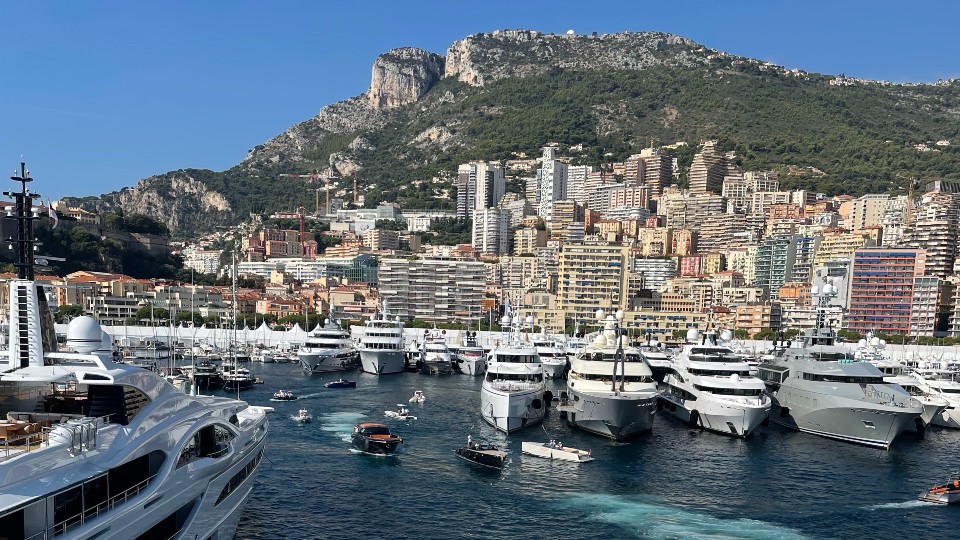 After the one-year hiatus caused by the pandemic, the Monaco Yacht Show reclaimed its mojo in its first two days, with yacht builders and brokerage firms all reporting strong sales. Informa, which organizes the show, had expected to hold a more condensed, buyer-focused version this year, leading with a “VIP Wednesday,” which was aimed at vetted buyers. But the attendees, mostly wearing masks, quashed those plans. There may be fewer visitors than 2019, but not by much.

New yachts like Feadship’s 308-foot Viva and the 279-foot explorer yacht Victorious by Akyacht were show-stoppers as was the 2019 launch IJE, the 354-foot Benetti that was the largest yacht at the show. Nobiskrug’s award-winning 262-foot Artefact dominated Port Hercules with a curved exterior that looks whimsical among the mostly straight-edged and sober-looking gigayachts.

Both yacht owners and clients looking to buy for the first time waited until the last minute to attend the event, Nicci Perides, Burgess’s head of communications told Robb Report. “We weren’t sure what to expect in 2021, but interest has been huge,” she said, noting it had 11 brokerage yachts on display. “Clients are here to shop. All our boats have had back-to-back viewings—almost unheard of for this event.”

The feeding-frenzy atmosphere across all boat segments was fed by new launches and product announcements at the show. Robert Drontmann, Heesen’s sales manager, told Robb Report that interest from credible potential owners at the show has been “across the board this year.”

The Dutch yard had five of its superyachts on display, including its recently delivered 180-foot Moskito. At 760GT, the steel yacht is one of the shipyard’s larger vessels in terms of volume, but the company announced even larger projects in build, including its largest-ever 198-footer Skyfall and 262-foot unnamed project.

Heesen CEO Arthur Brouwer said the superyacht industry is buoyed by a rocketing global economy and 32-percent increase in the number of billionaires worldwide.

A sportscar on the bow of the superyacht Victorious signaled that the Monaco show is back.  Courtesy Julia Zaltzman

“At this moment in time, there are 2,755 billionaires in the world,” he said at the builder’s press conference. “Stock markets are soaring, the GDP economy is expected to move up six percent this year…and some of that wealth is being used in the superyacht industry, meaning in yachting, the demand supply curve has changed.”

Brouwer said that sales have returned to pre-pandemic levels and he sees strong demand in larger superyachts. Heesen will continue to “advocate for sustainability,” as a focus for its design and build process.

Benetti Yachts, the world’s largest superyacht builder by volume, also noted its commitment to electric-diesel propulsion, saying it was implementing hybrid options across its range, from its smallest 121-foot B.Yond motoryacht to the recently launched gigayacht, 353-foot Luminosity.

Nobiskrug’s Artefact was one of the more whimsical gigayachts in the show.  Courtesy Julia Zaltzman

The Italian builder also announced an expansion of its Oasis platform, which is a new extended-stern design that it first launched last year on its 40-meter (131-foot) B.Now platform. Benetti said at a press event last night that the Oasis series would extend to a 50 meter (164 feet), 58 meter (190 feet), 66 meter (217 feet) and eventually a 72-meter (236 foot) design.

Andrew Collett, a designer from UK-based RWD, originated the idea behind the Oasis platform, saying that the deck comprised 50 percent of the length of the yacht. “The contiguous design was created to promote a new kind of connection with the water,” he said.

Tankoa Yachts also announced a new lifestyle yacht project, called Apache, which creates open spaces across the 249-foot yacht’s length as well as three large water features, including a “flying pool” on the upper deck with a transparent bottom that lights up the beach club on the deck below.

The cigar lounge area on board Victorious.  Courtesy Julia Zaltzman

“We created a gym and wellness space on two levels for the guests to enjoy,” said designer Alberto Mancini. “We also wanted to avoid the typical dark cave effect found on many beach clubs.” The beach club measures 1600 square feet, and includes two fold-down sides.

The yacht will be the most challenging the Genoa yard has ever built, Tankoa CEO Vincenzo Poerio told Robb Report. “But it’s still realistic,” he said. “Today, the technology allows features like the flying pool and open stern of the yacht.” Poerio also said that the project was scalable to both smaller and larger models.

Baglietto probably unveiled the most ambitious propulsion system at Monaco this week, noting that it had already started working on its Bzero, or B Raised to Zero project, which will integrate hydrogen fuel technology on a hybrid or diesel-electric platform to power its superyachts in zero-emissions mode.

The owner’s view of the show.  Courtesy Julia Zaltzman

The Italian builder, which currently has 13 yachts under construction, said it would have a working prototype of the propulsion system by next year and plans to outfit new yachts by 2025.