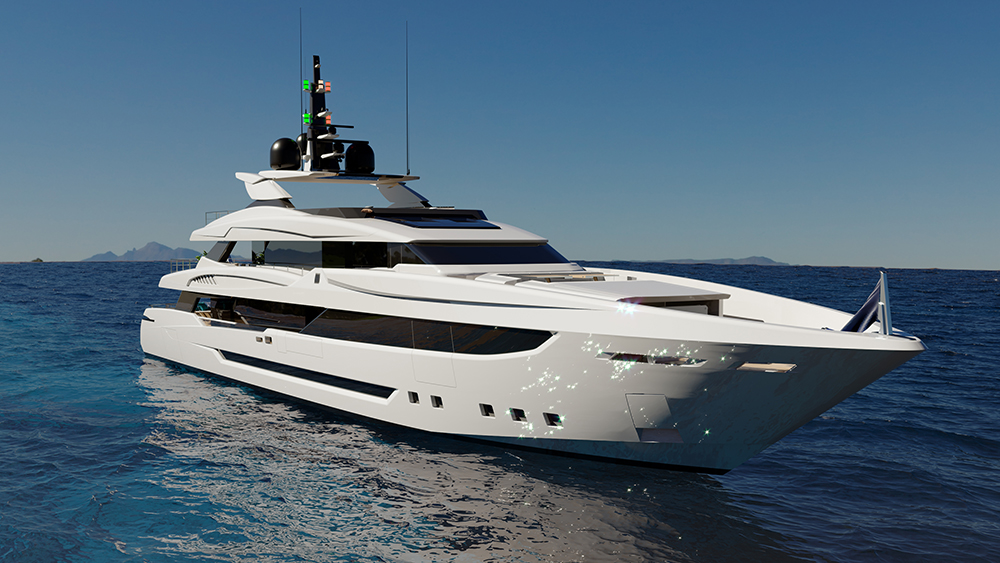 Mondomarine is one of the leading Italian brands that has kept its name intact by constantly evolving. It traces its roots back to the Cantieri Navali Campanella shipyard in Savona in 1915, when it quickly became a popular refit destination. Mondomarine launched as a superyacht division 41 years ago and arguably has since built the most diverse collection of yachts, from the sublime to the outrageous. The ruby-red hull of Ipanema, the futuristic Sea Falcon and the rounded curves of Okko are all examples of the sweep of the brand.

Since being acquired by Palumbo Group last year, the brand has entered a new era where clients can choose the interiors built on proven hull platforms. Recently, the yard announced the Classic yacht series built on proven 141-, 164- and 207-foot semi-displacement hulls. Their draft of 8 feet allows travel from Florida to relatively shallow-water destinations like the Bahamas.

Luca Dini, who has a studio in Florence, has been a consistent award winner for his designs over the last 25 years. He is the designer for the new Classic series. Luca also designed the 197-foot Mondomarine Sarastar, which launched three years ago. The yacht has a stunning navy-blue hull, angular architectural features etched into the profile and a spacious beach club at the transom. Sarastar is a legitimate head-turner in the 200-foot class.

Dini used Sarastar as a reference point for the Classic series. “I wanted to note the rebirth of the shipyard by restarting from where it left off,” Dini told Robb Report. “We all agreed that any new line had to convey a feeling of continuity with what had been done before. Hence, the ‘Classic’ name. It symbolizes Italian design that is both sporty and elegant, and in line with more recent Mondomarine models.”

The new Mondomarine Classics combine angular profiles and straight-edged windows with soft, rounded curves across the superstructure. The look manages to be traditional and contemporary at the same time.

“If you compare Sarastar with the new Classic designs, you will find a common philosophy that includes soft curves and sharp edges,” says Dino. “The overall look reveals a sporty character without any excess. Many distinctive features of Sarastar can be found in this new line, even if they have been completely redesigned.”

Dino points up to the wing station beside the wheelhouse on the upper deck. “The way it curves and connects seamlessly with the bow would not be out of place on a fighter jet,” he says.

One of the goals of the Classic design was to combine form with function and retain a visual appeal. “I wanted the eye of the beholder to be captured first by the proportions and harmony of the ensemble, and to later appreciate all the various details that enrich the overall look,” he says. “A good example is the carved surface on the upper deck that also serves as the engine-room exhaust. The curves that define it have a resonance with the character lines on both bridges and on the hull. Our goal was to create a harmonious contrast between the soft and sharp.”

The designer takes inspiration from the sports cars he loved as a child. “I’ve always been a car enthusiast,” Dino says. “So when I entered yacht design it was natural for me to take the automotive world as a reference. The GTs made by Ferrari, Aston Martin, Lamborghini and Porsche are astounding machines that breathe power, speed and technology, but they are first of all beautiful objects.”

The Ferraris in particular inspired Dini. “Looking at the profile of their cars, you see soft, sinuous, flowing contours,” he says. “But as soon as you change your point of view, even slightly, they reveal carved surfaces and sharp edges. This is what I have tried to bring into the design of the new Mondomarine Classic yachts, along with character lines that run horizontally along the profile, both on the hull and superstructure. These lines give the yachts momentum and dynamism to emphasize the motion that a boat represents.”

Owners will have wide choices regarding layout, interior style and exterior design, says Dino. “Whoever pays that kind of money should have the right to get a yacht that reflects their personality,” he says. “It has to be comfortable and livable. It should feel like a tailored suit.”