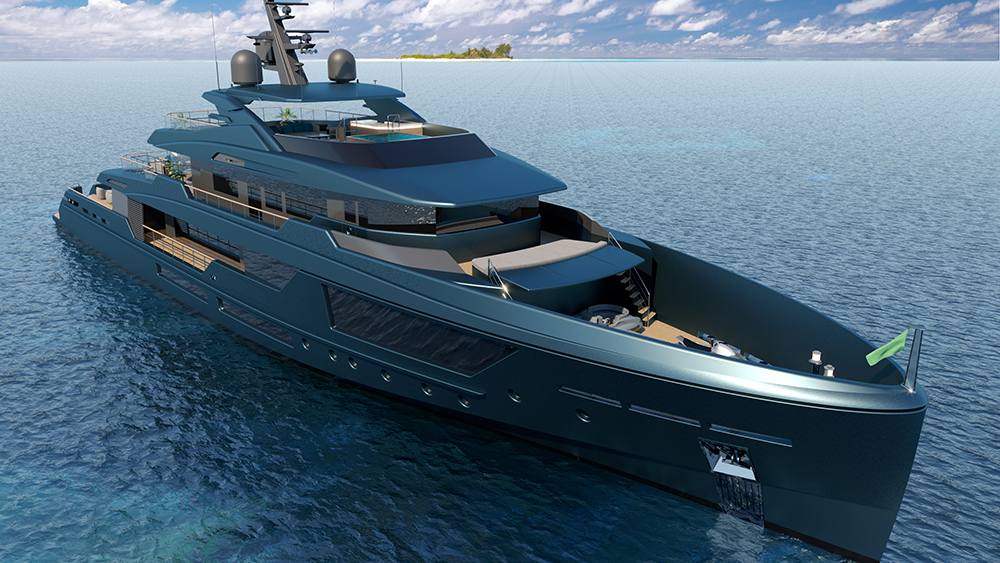 Say it in your best Italian, and preferably with a shrug of the shoulders and your palms upturned. Veloce!  It translates into “fast,” which describes the mantra at Italian superyacht-maker Palumbo these days.

Since last November’s acquisition of the renowned, though sadly bankrupt, Italian superyacht-builder Mondomarine, Palumbo Superyachts has been going flat-out to resurrect the famous brand.

The fruit of its labors have just been revealed with the unveiling of an entirely new Discovery line of Mondomarine superyachts. The first, seen here in all its computer-generated glory, is the stunning Discovery 57—a sleek and slender 187-footer designed by longstanding Mondomarine design wizard Luca Dini.

If you know your superyachts, you’ll remember that it was Dini, head of Luca Dini Design, who drew the lines of the ground-breaking Tribù explorer yacht. This rugged 164-footer was built by Mondomarine back in 2007 for Luciano Benetton, head of the Italian Benetton clothing empire.

Design highlights of this new 57-meter explorer-style yacht include its vast exterior deck spaces, which accommodate not one but two pools—the larger one on the expansive rear deck, complete with an infinity rear-edge, the second on the flybridge.

In addition to the master suite on the main deck, the accommodations include four guest cabins on the lower deck, all en suite, together with six crew cabins.

The pool on the aft deck.  Photo: Courtesy of Mondomarine

Of course, this new Discovery model isn’t a one-size-fits-all design. Take your pick from a quartet of versions—the 43-meter/141-foot, the 50-meter/164-foot, the aforementioned 57 and the flagship 75-meter/246-foot yacht.

Big windows give big views and lots of light.  Photo: Courtesy of Mondomarine

The Luca Dini design is also said to put a lot of emphasis on providing big windows to give unobstructed views and let in plenty of natural light. The windows in the forward part of the hull are simply vast.

Hopefully, the Polumbo Group’s acquisition of Mondomarine and its yard in Savona just west of Genoa will give the shipbuilder some much-needed financial stability. The constantly expanding Palumbo Group currently has the largest refit/repair network in the Mediterranean and Eastern Atlantic, with eight busy shipyards everywhere from Tenerife, to Marseilles, and from Malta to Rijeka in Croatia.

As for Polumbo Superyachts, the division owns and runs Columbus and ISA Yachts, both of which are running flat-out completing orders. ISA’s Arcona yard has just pulled out of the shed the new 80-meter/262-foot superyacht Dragon, with plans for a fall splash.

Perhaps Polumbo should consider changing its name to Veloce. Certainly, speed seems to be of the essence here.