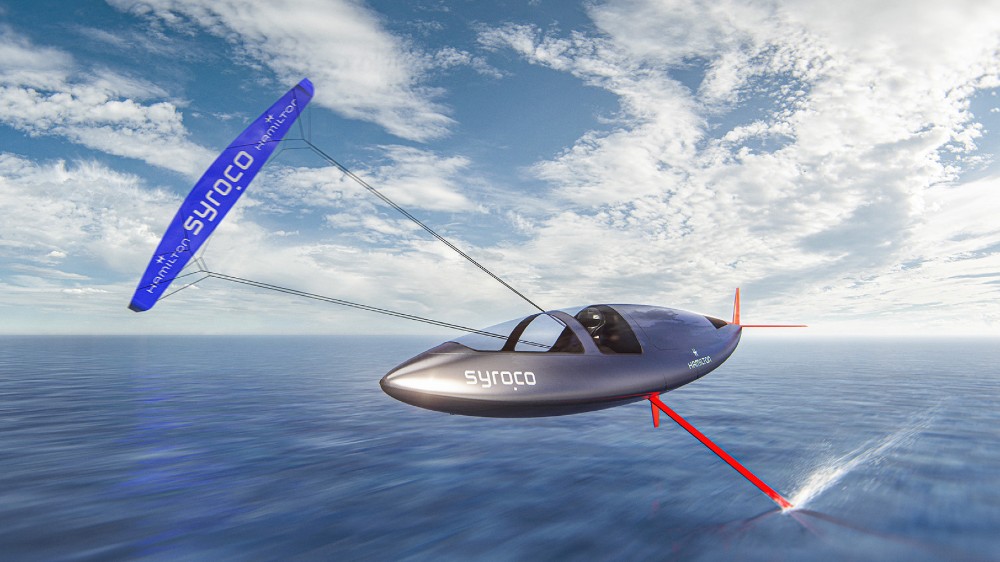 A French startup doesn’t want to just beat the current speed record for a sailboat. It wants to crush it. Syroco, launched by a world record kite-surfing holder and a tech veteran, says its boat, Moonshot I, plans to pass the 80-knot mark, or just a hair over 92 mph, in the next year.

That may not sound like much compared to an airplane or even a car. But it’s the maritime equivalent of breaking the sound barrier for a sailing vessel, which relies only on wind, sails and the design of the hull. The current record holder is Paul Larsen who reached 55.32 knots (63.7 mph) on his Vestas Sailrocket 2 in November 24, 2012 during a run on the extremely windy Walvis Bay, Namibia.

“We’re not following the same concept as the Sailrocket,” says Alexandre Caizergues, a co-founder of Syroco, who was the first person to pass the 100-kilometer-per-hour mark in 2010. Caizergues, a four-time kite speed world champion, told Robb Report that he’s “always chasing speeds.” He has been thinking about a new way to challenge since Larsen broke the record almost 10 years ago.

Lifted above the water, the airplane-like pod will be where the two pilots control the wing sail above and foil underneath.  Courtesy Syroco

Caizergues and his partner, Yves de Montcheuil, put together a team of sailors, naval architects and even specialists from the helicopter sector to design Moonshot I, which is a wild combination of foil, kite and a 20-foot-long pod that holds two people. “We had to rethink the way to go faster on the water, but it had to be as safe as it was efficient,” says Caizergues.

Moonshot I actually flies its pod a few feet above the surface, using foils to keep it grounded to the water, and kites that provide the propulsion. The pilots in the pod will have to control the kite and foil to avoid crashes at dangerous speeds.

But the main hurdle the designers have faced is mastering the cavitation—the air bubbles that build up as the foils move faster—at speeds that no sailing vessel has ever reached. America’s Cup racing vessels have used foils for about five years to attain lightning-fast water speeds, but they tweak the shapes continuously to minimize cavitation. “The big challenge is finding a foil shape that works at both high and low speeds,” says de Montcheuil. “Our goal is to take advantage of the cavitation and not, like most racing sailboats, fight against it.”

The kite sail will serve as propulsion for the boat, while the foils will steer and keep it fixed to the water.  Courtesy Syroco

The startup is developing foils that use “super-cavitation”—a frictionless cavitation used by torpedoes and some propellers. It also plans to expand that technology beyond sailing into commercial shipping. “Speed isn’t just our end goal,” says Montcheuil. “Our software simulation platform, Syroco Efficient Ship, lets us apply our research and help shipbuilders make much more efficient hulls that will reduce their carbon footprint. Nobody else is working with this kind of technology.”

Breaking the speed record will take another year, says Caizergues. Syroco now has a third-scale, radio-controlled model it’s testing with different foil and kite shapes. “Once we can manage the kite sail as a propulsive force,” he says, “it’ll be time for the full-scale model.”

The team will be doing its testing just offshore of Marseille, France, where it is based. Instead of using the Saharan Sirocco wind—which it’s named after—to power Moonshot I, the Mistral, another infamous wind blowing into the Med from the Alps, could help the boat smash the record.