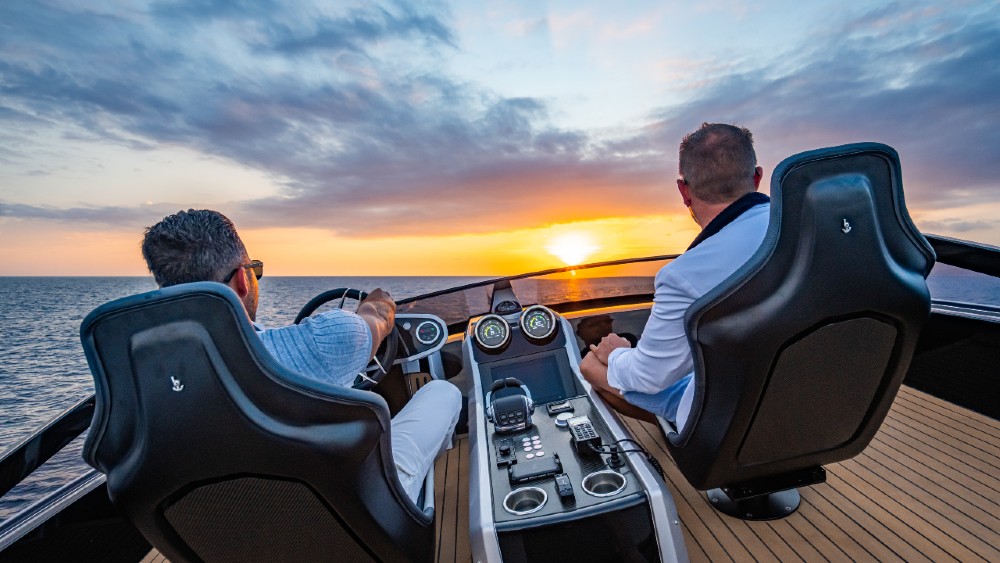 Buying a 65-foot motoryacht for its upper helm might sound crazy, unless you happened to be in the market for a vessel that size. And even then, one feature does not make a yacht. But the new racing-style design of the Sunseeker 65 Sport Yacht’s helm totally changes the boating experience—or in this case, the driving experience.

Most of the time, being at the helm of an 83-ton, 65-foot yacht is like watching paint dry. It’s a question of getting to your destination or anchoring somewhere to use the boat. Typically, driving means keeping the proper depths and making sure smaller vessels are out of the way. It’s rarely about having fun.

But the “Sky Helm” on the new 65 changes all that. The name sounds a bit pretentious, but after you sit down in the form-fitting Besenzoni racing-driver’s seat, adjust the steering wheel on the tilting column in front, and peg the throttle, it feels like a much smaller, nimble boat that’s moving faster than its 40-mph top end.

There aren’t many 65-footers that deliver this peppy ride, and while the person on the foredeck is enjoying the view, the captain on the upper deck (note small head in center) is having the most fun.  Courtesy Sunseeker Yachts

Leaning into turns, the horizon tilting and wind whipping through your hair, is unlike the typical motoryacht where you sit, half-engaged, in an upright helm seat. That is passive. This was active. Here you’re leaning back, close to the deck, legs comfortably way out in front. Think driving a sportscar as opposed to an SUV.

Enough gushing. From an owner’s point of view, the Sky Helm’s layout is well done. Two matching, slender Besenzoni seats are divided by a center console with the throttles, VHF, wireless charging pad for a smart phone and several instrument bezels with analogue outer screens and digital readouts that display the essential ship’s functions in the center. For the driver, it’s an easy-scan layout. The steering wheel tilts up so you can stand and dock the boat via joystick, with the ability to see everything below. Behind is a large sunbed for three, though passengers will definitely be leaning into the turns with the driver.

The boat we drove offshore of Fort Lauderdale into the Atlantic had twin 1,000-hp Volvo Penta 1350 IPS engines. Typically, hitting two- to four-foot seas in a big boat is a bit unnerving, but being so high off the water made it fun.

The new Sky Helm with the low, form-fitting seats and tilt wheel, turns a 65-foot yacht into a sport boat.  Courtesy Sunseeker Yachts

Beyond the flybridge, the design team also did a good job with the rest of the yacht. Like many boats these days, the UK builder focused on creating a more natural flow between the lower cockpit and inner salon, with a teak cockpit table for cocktails or dining, an outdoor grill and sunbed that hangs over the swim platform. The sliding glass door and glass panel over the outer bar, when open, creates a seamless feel between inside and out.

Sunseeker has been working hard on their interiors over the last three years and it showed on this yacht. The interior has a contemporary, residential look, and that shows up in the galley, which are often downright “boaty.” The 65’s kitchen has excellent counter space, with cooker and microwave, and refrigerator/freezer on the starboard side. Forward, the salon has a lounge and three-piece table on the portside and an entertainment center with a 55-inch, pop-up television to starboard.

The main helm station is more elaborate than the Sky Helm, with two seats, a carbon-fiber dash and Garmin all-glass console in the center. The salon also has a large overhead panel that opens to let fresh air in when the 65’s at anchor. The test boat, in a nod to Sunseeker’s British origins, had Royal Doulton dining ware in the cabinets.

The open feel of the salon, defined by its residential feel and multitude of windows.  Courtesy Sunseeker Yachts

Like the main deck, the design on the floor below had considerable thought put into it, both with the layout and the aesthetics. The full-beam main suite at the rear has an office in the passage to the bedroom, with a foldout seat. The sleeping space is generous, with large windows on either side, a side lounge with vanity, and spacious en-suite with a glassed-in shower. The television is part of the large mirrored wall.

The VIP stateroom forward is generous, given its position at the bow, with a double bed and en-suite. Stainless steel patterns are inlaid into the walls, including a stylized Sunseeker logo that lights up. Depending on taste, that could be a bit overkill, but it’s in keeping with the rest of the sport yacht.

The real standout feature on the 65 Sport Yacht is the Sky Helm, which is an option. It’s clearly the differentiator between this Sunseeker and a half-dozen competitors in this niche. We expect to see it popping up across multiple lines as it changes the driving experience.

Here are some other angles.