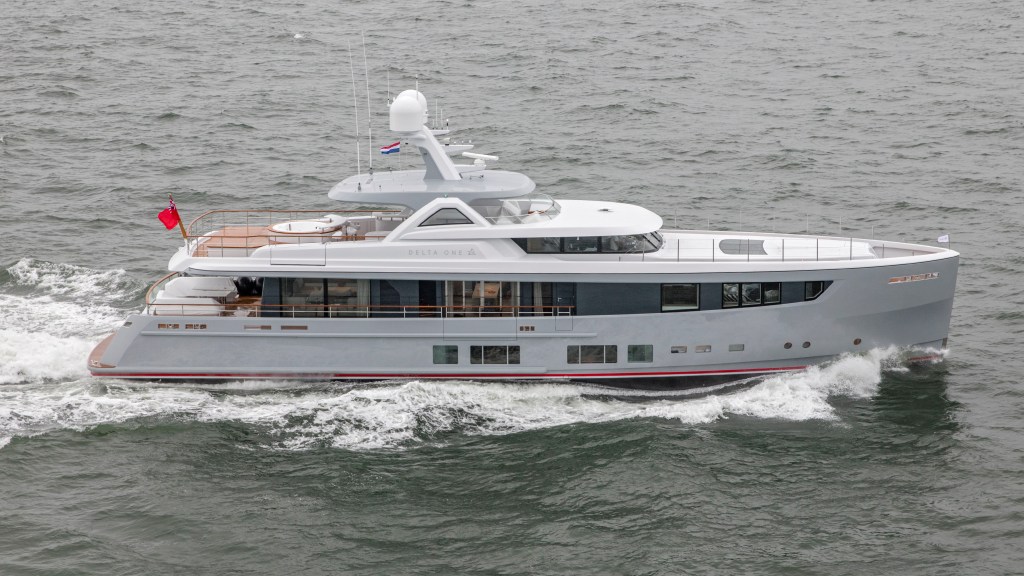 Mulder Shipyard has launched a collection of classic but eclectic-looking motor yachts that has made the Dutch shipyard a highly respected name among custom yacht builders.  Included in Mulder’s more than a dozen noteworthy designs is its 112-foot motor yacht Solis that last year won a World Superyacht Award. Delta One, the Dutch yard’s flagship, will most likely take its own share of awards. The 118-footer recently completed sea trials in the North Sea. The first of the yard’s new ThirtySix range, the yacht will make its debut at the Monaco Yacht Show.

Delta One’s vertical bow, high bulwarks, and protected foredeck give it a seafaring look, the kind of yacht that looks like it can venture into the North Atlantic without having to worry. The fast-displacement hull by Van Oossanen Naval Architects lived up to that look during the sea trials, where Force Six winds of 27 knots whipped waves up to 13 feet high. Powered by twin Caterpillar C18 engines, Delta One reached a top end of 16.8 knots, and turned in a very respectable cruising speed of 15 knots. The all-aluminum yacht is one of the few of its size to have transatlantic range.

Up on the sky bridge, however, it’s clear that Delta One was designed to spend most of its time in southern waters. The eight-person Jacuzzi, wet bar, dining table, sunbeds, and lounges turn the upper deck into a generously sized social platform, protected by a hardtop. On the deck below, the aft cockpit joining the saloon also offers the possibilities of alfresco dining or just sitting near the water while at anchor.

Claydon Reeves did an exceptional job with Delta One’s unique-looking profile, but the U.K. firm’s interior design is where the boat really departs from the norm. The designers made full use of the 26-foot beam and existing footprint for Delta One’s saloon, master suite, and four guest staterooms, so that each feels supersized compared to other yachts in its class.  The master includes walk-in closets and en-suite bathroom, while offering private access to a seating area in the bow. Floor-to-ceiling windows in the saloon and dining area not only enhance natural light, but the foldout terrace adds an extra dimension to dining beside the sea. Its last and perhaps most impressive feature, the full-headroom beach club, includes a bar and bathroom—a signature design for a yacht this size. Delta One also has a healthy assortment of water toys, including a 20-foot Williams tender, two jet skis, and six Seabobs.

Mike Reeves, one of the partners at Claydon Reeves, said his firm worked closely with the owner and the shipyard to create a compelling new design for the under-120-foot category. “We pushed hard to redefine what can be achieved in a vessel under 300 gross tons,” said Reeves. “We’re very pleased with the results.” Delta One was built to RINA standards and will be certified under MCA LY3 for charter.