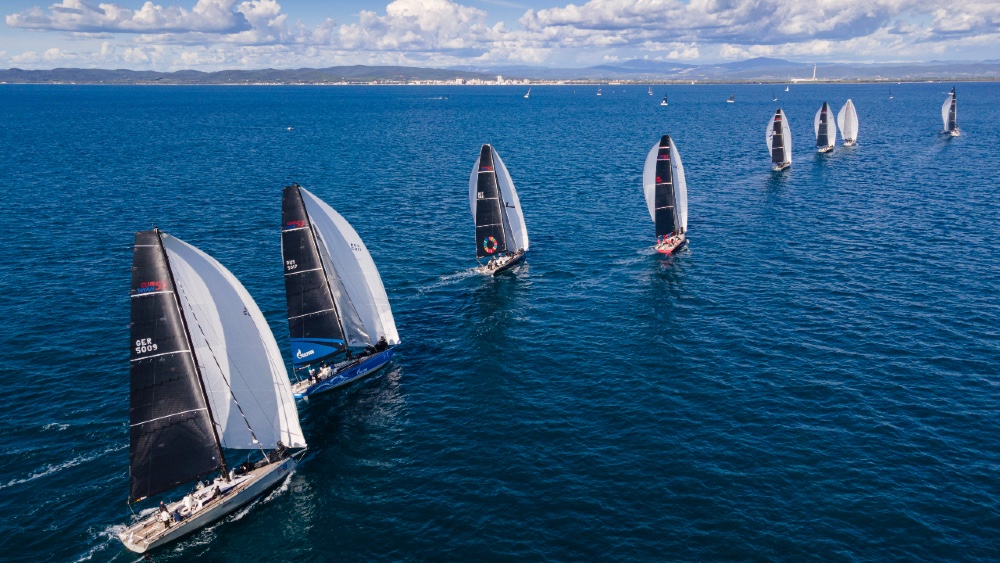 While most public yachting gatherings have been canceled due to Covid-19, Nautor’s Swan held a multifaceted event in Italy last week that included races for its different sailboat classes and a private boat show. “The Nautor’s Swan Experience concept has been on our table for many months,” Giovanni Pomati, Nautor Group CEO, said in statement. “The current situation, with the cancellation of nautical events all over the world, has speeded things up.”

The builder from Finland, with Italian ownership, had no models to display, and Swan racing owners, who have been stuck in their homeports all year, were ready for an event with like-minded sailors. Twenty-six yachts representing 10 countries showed up to the Marina di Scarlino in Baia Scarlino along the Tuscany coast to participate in the Swan One Design Worlds and the Scarlino Private Boat Show.

The week-long event, which concluded yesterday, also included a Lamborghini display that allowed the attendees to test drive cars, an art show, and many culinary delights. The Private Boat Show had a Swan 48, Swan 54, Swan 65, Swan 70, Swan 75, Swan 78, and Swan 115.

The One Design racing was one of the few racing events for owners since Covid-19 has forced international regattas to be canceled.  Nautor's Swan

Private yachting events are becoming somewhat more common, especially in Europe, as boat shows like Cannes and Monaco were canceled due to Covid-19. The Azimut-Benetti Group held a private owner event in France last month, as did global brokerage firm Northrop & Johnson in Monaco.

But the Nautor Swan gathering, with its racing and boat show, was the most elaborate event, driven by owners who missed a season of racing. The races turned out to be fewer than expected, with two of four canceled because of “fickle” winds that could have endangered the crews.

The private boat show included the full line of Nautor’s Swan sailing vessels, all the way to the flagship Swan 115.

Despite the two missing races, the competitors were delighted to be on the racecourse. “We are very happy,” said Hatari owner Brennecke following the race. “We had lots of fun and showed great crew work—as a team and as individuals. It is a very competitive class with nice people and a good spirit.”

The ClubSwan 50 attracted 10 yachts, the highest number of any category. “It is a fantastic class,” said Jochen Schümann, who has been a tactician with the ClubSwan 50 since it started in 2016. “The owners have really committed to it, and soon we can expect 20-plus boats on the start line.”

Nautor’s Swan, which aimed to create a “360-degree experience” with the seven-day event, felt that the goal was achieved, even with mandatory Covid-19 precautions like social distancing and participants wearing masks.

Nautor Group Chairman Leonardo Ferragamo said the company has been working hard to create a global brand. “The Swan Experience has provided us with the first real opportunity to showcase” the different facets of the company, he said. “This includes our craftsmanship, the many elegant and innovative models, the One Design racing, and the brokerage and charter services.”