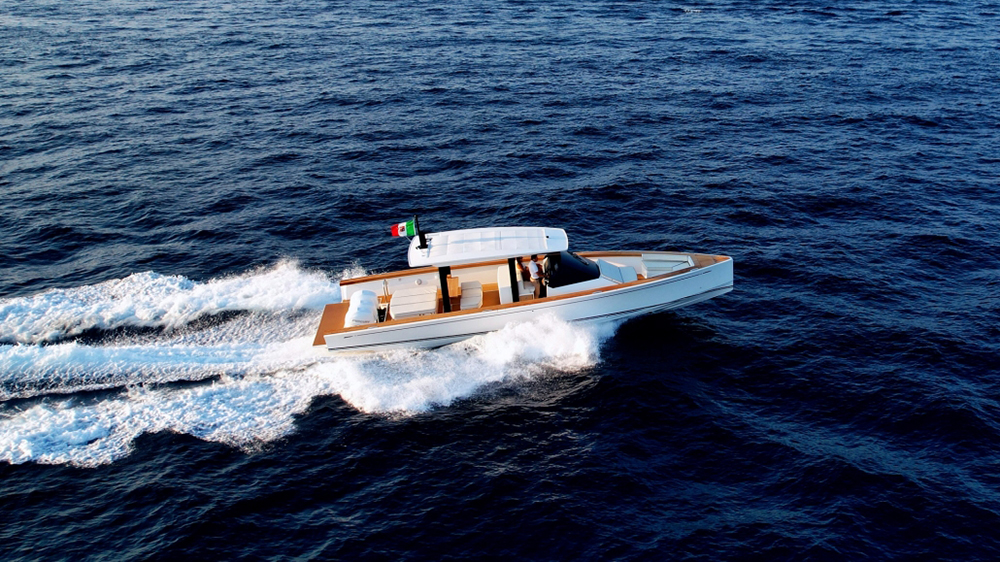 Nautor’s Swan has spread its wings and started selling its first motorboat.

The storied sailboat builder from Finland, which has been laying keels since 1966, launched a new powerboat called the Swan Shadow last May and has now appointed Asiamarine for sales. Headquartered in Hong Kong, the dealership told Robb Report that the new 43-footer will set you back between $760,000 and $911,000 depending on the build.

The newcomer sports the same elegant lines as Swan’s sailing yachts but is equipped with three outboard engines ranging from 225 hp to 350 hp each. As a result, it can reach 63 mph at full tilt. You’d be hard-pressed to find a sloop that could match that speed.

Swan Shadow has a top speed of 63 mph.  Nautor's Swan

Penned by noted marine architect Jarkko Jämsén, Swan Shadow could be used as either a tender for a superyacht or a standalone boat. Roof options range from a shorter T-Top to an extended Long Top that allows more protection from the elements. The Long Top option can also be equipped with telescopic pillars to work as a convertible limousine for added privacy and comfort.

The 43-footer could be used as either a tender for a superyacht or a standalone boat.  Nautor's Swan

The boat is available in five different modular layouts that each come with different features, from a wet bar to extra sun pads. It is also fitted with a comfy cabin (or two) and a sizable swim platform that folds outward behind the outboards. The decor, meanwhile, has been kept simple and elegant like Swan’s sailing superyachts. For the unversed, the builder’s woodwork is some of the most beautiful in the yachting world.

“We are absolutely delighted to be associated with Nautor’s Swan and the new Swan Shadow,” Asiamarine’s founder and CEO Eric Noyel said in a statement. “Their move into the motor yacht sector of the market is truly a milestone moment, and Asiamarine is proud to be an integral part of this, in Asia.”

The interior is similar to Swan’s sailing superyachts.  Nautor's Swan

Owned by Leonardo Ferragamo, Nautor’s Swan has launched more than 2,300 sailing yachts over the past half-century. The fleet is made up of some 94 different models that range between 36 feet and 125 feet. That number could grow substantially now that a new Swan has come out of the shadows.