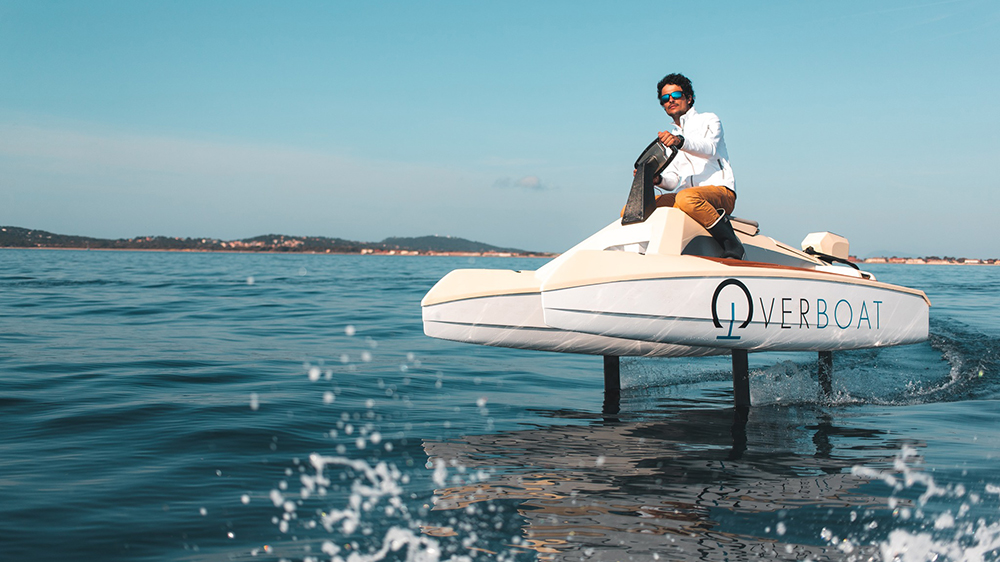 Neocean wanted to see what happened when you combined a catamaran with a jet bike. The answer looks like a whole lot of fun.

The French company recently launched an electric personal watercraft series called the Overboat F, according to New Atlas. The unique vehicle, which comes in two sizes, features an electric drive and three hydrofoils that allow it to effortlessly speed across the water in silence.

The Overboat F is basically a jet bike on top of a catamaran-like base. It has two poly-fiberglass hulls that are connected by a central seating area which has room for one or two depending on if you’re riding the 100F or the 150F. The two hulls are each topped with marine flooring and can be used as a mini-deck or swimming platform when parked. Meanwhile, the seating area is equipped with an electric steering wheel with a digital display, a comfortable saddle and a hidden cubby area for storing gear.

The watercraft is powered by three retractable foils—two positioned up front, the other in the back—and an electric propeller. When you’re ready to ride the Overboard F, you push the foils down, turn on the propeller and launch forward, which forces the hulls out of the water. Powering the propeller is a 10-kw, 50-volt electric motor. Neocean says the Overboat F has a top speed of 20 knots (about 23 mph) and a cruising speed of 15 knots (17 mph). A traditional jet bike can be twice as fast, but it also spews out carbon emissions and makes a lot of noise—two things that can’t be said of the Overboat F.

The watercraft’s motor gets its power from a 10-kWh battery pack that’ll allow you to run the vehicle for up to two hours at a time, according to the brand’s website. That should be enough for most days, but if you want to keep going, you can fully charge the battery in less than two hours.

Looking for something unique to ride next time you’re down at the lake or river? Neocean is taking orders for Overboat F now. You’ll have to reach out to the company through its website for pricing, though New Atlas reports that the top-of-the-line 150F will set you back $35,900.

Click here to see all of the photos of the Neoxean Overboat F.