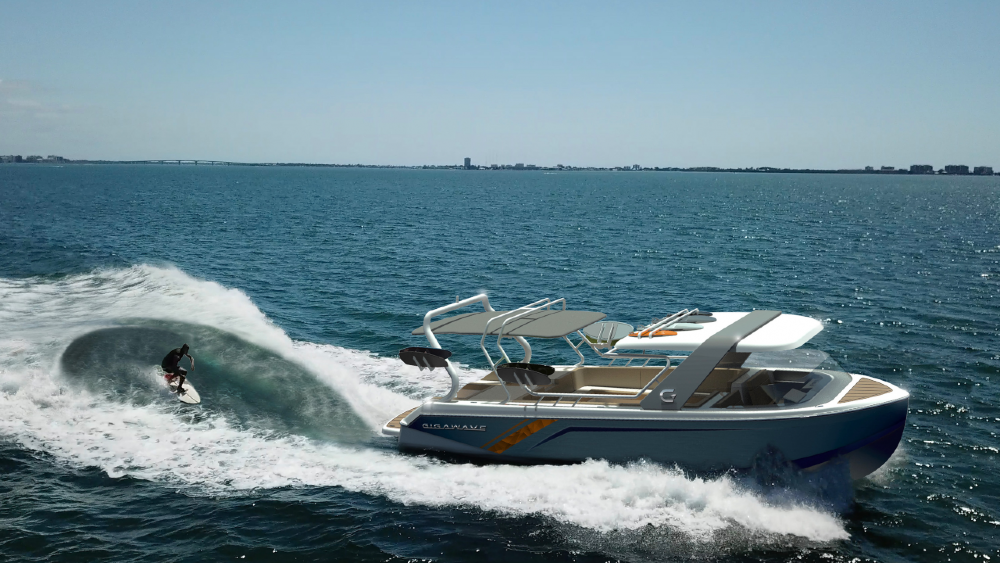 They call it “Gigawave” for a reason. This high-powered, all-electric watercraft is promising to create the biggest, tallest, and best-curling wave for the ultimate thrill ride in the fast-growing sport of wake surfing. The brainchild of New York-based boat designer Matthew Blew, his concept Gigawave 350 GW-X will feature a hull that’s designed to throw up a continuous, head-height barrel that will match the size and feel of Maui’s finest rollers.

Instead of big, exhaust-spewing inboards to move the 35-foot Gigawave through the water, Blew plans to use a pair of high-torque, zero-emission 300-hp electric motors that will be powered by a bank of lithium-ion batteries. “We’ve upped the battery capacity since our original concept,” he says. “Now we’re looking at a full megawatt of power—the equivalent of a million watts.” The goal is a run-time of six to eight hours between charges, and a quick two-hour charge time with industrial chargers.

The Gigawave came about after boat designer Matthew Blew noticed that wake-surfers were surfing behind large, 40-ft. cruisers to get a much larger wake.  Courtesy Gigawave

The Gigawave’s secret of creating a huge wake will be its enormous weight, targeted at a hefty 30 tons. “You don’t need to go fast to create a towering wake,” he says. “We’re aiming at a surfing speed of somewhere between 10 and 16 mph.”

With Gigawave expected to launch next year, Blew and his small team, including industrial designer Ryan Wetjen-Barry, are fine-tuning its “Wave Manipulation System” hull design. The next step will be scale models for tank-testing to ensure their theories work.

Blew’s credentials include a stint as design engineer with Regal Boats, then as design director with recreational pontoon boat maker, Crest Marine. For the past four years, he has been researching the wake surfing market while coaching water sports. When we caught up with the 35-year-old, he was in Costa Rica perfecting his kite-surfing skills. Blew has been a dedicated wake-surfer for eight years.

Super-sizing the wake could add to the thrill of the experience while also attracting real surfers to the sport.  Courtesy Gigawave

Where did the idea for Gigawave come from? About four years ago, Blew noticed that wake surfers were switching from traditional wakeboard boats to bigger, 40-foot-plus yachts so they could surf in taller, more challenging waves.

Gigawave’s price tag will be around $600,000. Early hand-raisers include a mix of wealthy private buyers, wake-surfer clubs, and high-end resorts specializing in watersports. “What it creates are perfect surfing conditions,” he says. “I’ve lost count of the times I’ve traveled to a surf location only to find there’s no swell. With Gigawave you have waves on demand.”

His initial renderings of the boat—with its bluff bow, tiny foredeck, helm-at-the-front, and awkward mix of hard- and soft-tops—didn’t win universal praise on social media.

Many boat enthusiasts were underwhelmed by the first renderings of the boat, but Designer Blew says Gigawave is “exploring lots of different options.”  Courtesy Gigawave

“We’re still exploring a lot of different options,” says Blew. “But the renderings did create a great deal of interest—more than 35,000 website visitors in a month and 500-plus emails. We can’t wait to prove the technology.”