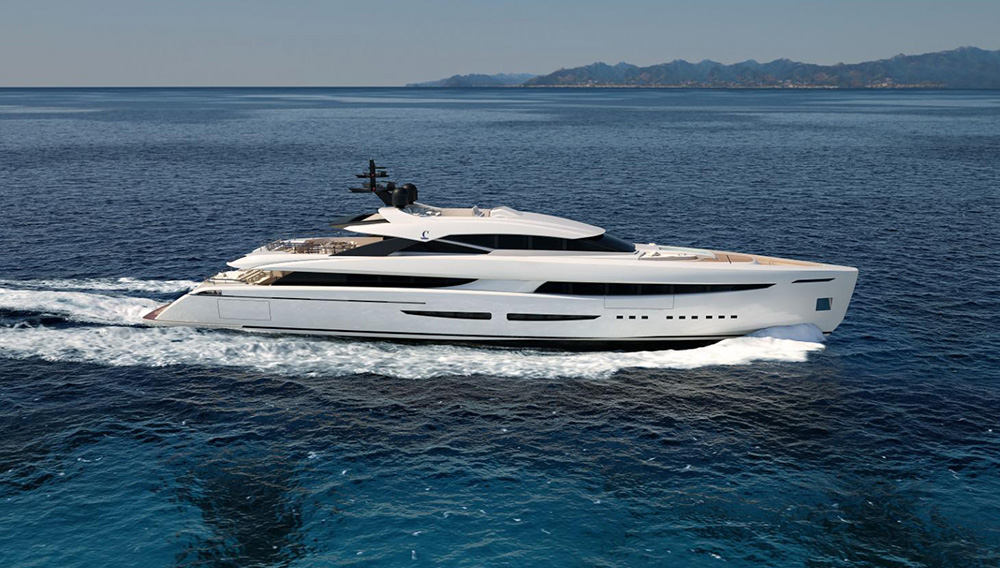 Columbus Yachts—whose Columbus Sport Hybrid 40M received a Robb Report Best of the Best mention in 2014—is targeting the American and Asian markets with its versatile Columbus Oceanic Coupé 50M series, which will initially appear in 148-foot (45-meter) and 164-foot (50-meter) editions. Conceived by Stefano Inglese Vafiadis of Studio Vafiadis & Associates, the crossover design blends a roomy, comfortable interior with sporty topsides. The long, sweeping, and curvaceous superstructure, combined with a straight, aggressive-looking hull, creates a handsome and striking profile. The abundance of exterior space on all decks, including an expansive flybridge, provides plenty of space for outdoor lounging, while the transom beach club delivers instant gratification at the water’s edge.

The new Columbus Oceanic Coupé 50M certainly looks fast at anchor, and at speed its semi-displacement hull and its MTU or CAT engines (depending on which propulsion system the owner chooses) is projected to reach a sprightly 21 knots. While it is built to cruise at a very respectable 19 knots, running a few knots less will give it a range of 3,800 nautical miles.

Despite the open topside spaces and fast speed, Columbus made a strategic and sensible decision not to compromise on the interior space, as one might find on coupe designs. Instead, the square footage is similar to a more traditional trideck superyacht. The Italian shipyard, part of the Palumbo Group, offers owners a variety of reconfiguration options. The galley, for instance, can be situated on either the main deck (preferred by most Americans) or lower deck (more common in Asia), while the top deck can remain as an open flybridge or enclosed as the captain’s cabin. A gym, a spa, or a cinema also can be incorporated into the lower deck. All plans, however, call for a generous master suite on the main deck, with two saloons (one formal and the other informal) on the main and upper decks—yet another feature that differentiates the new Columbus Oceanic coupes from traditional ones. (columbusyachts.it)