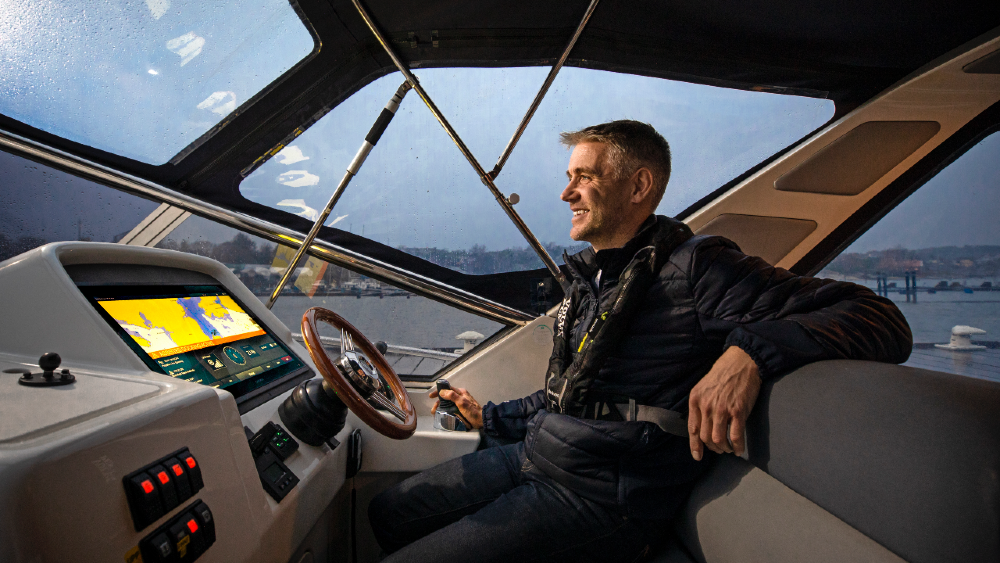 Several years ago, at the Volvo Ocean Race in Gothenburg, Sweden, I watched as a 65-foot motoryacht backed into a slip between two multi-million dollar raceboats. That would normally not be a big deal, except the boat was automatically steering itself, stopping to correct course, and eventually resting about six inches from the dock. That was a high-stakes test of Volvo Penta’s fully automated docking function, and the most impressive display of machine-controlled seamanship I’ve ever seen.

At the virtual Consumer Electronics Show (CES) this week, Volvo is introducing a different form called Assisted Docking. It’s less comprehensive than the automated docking I saw in Gothenburg, but will make more sense for boaters who want to feel more in control of their boats, all with a simple joystick.

“When we launched our joystick technology in 2006, the maneuvering and control brought a new chapter to boating,” Anders Thorin, Volvo Penta’s electronics guru, told Robb Report. “This Assisted Docking system is the next step in easy boating.”

Even with wind and current, the boat backs straight into a slip, with joystick control.  Courtesy Volvo Penta

Volvo Penta and its competitors have been in a race to develop electronic systems that make boat-handling easier and less stressful, but this system puts the Swedes at the front of the pack. Crowded marinas, windy waterways and rough currents can make navigating a nail-biting experience. Assisted Docking works with any boat using Volvo’s IPS electronics system, including some of its 120-foot superyachts.

It’s a cool human-machine interface Thorin said was hard to develop, even compared to the fully automated system. “Part of it is to make the driving feel absolutely natural so you don’t feel like the automation is taking over,” he says. That means the boat needs to move in a straight line in wind, without the driver having to always compensate, or hover over one spot when you want to remain in place without tossing out the anchor.

By touching a “Side Push” button on the helm console, the boat can come into a dock sideways. It instills a lot more confidence than the usual fire-drill of a yacht caught in a big crosswind, looking like it’s being pulled three ways as it tries to get safely to the dock.

The helm console shows the system at work, with assist power percentages and a “Side Push” button that delivers extra power when moving sideways into the dock.  Courtesy Volvo Penta

If the system were a movie, think of it as Robocop, where machine and human are joined as a single entity for a common goal. Of course, boating is a lot more fun than terminating criminals. But on windy days, it can also be highly stressful. That is, until now.