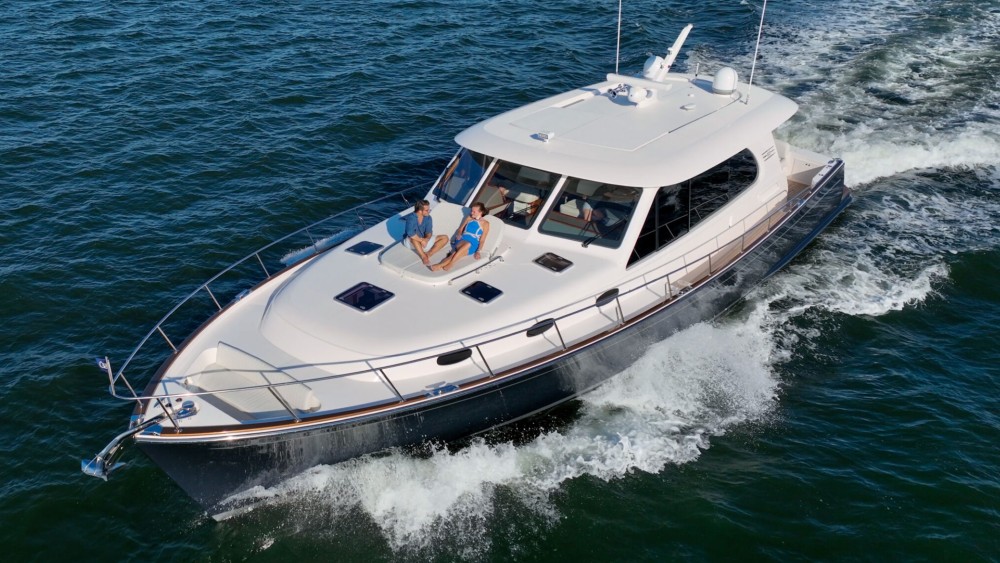 The Grand Banks Eastbay 60 is much more than meets the eye. The flagship in GB Marine Group’s Eastbay line, the 60 has a staid and classic profile that would fit right in from cruising from Newport to Kennebunkport. When Eastbay was launched in 1993, it was designed to compete with established Downeast brands like Sabre and Hinckley. Thirty years later, it continues to compete, but now it has the advantage of a new flagship.

Despite the 60’s old-school-ish lines, however, this yacht performs in a way that might be described as sporty at top end, and could also qualify as efficient in friendly cruise. With the upgrade twin 900-horsepower Volvo Penta IPS1200s, the Eastbay tops out at a very respectable 30 knots. But it also cruises efficiently at 21 knots (with a range of 894 nautical miles) and goes into hyper-efficient mode at a 10-knot displacement speed.

The performance edge comes from combining its V-Warp hull, which Eastbay says delivers a smoother ride and more efficiency than a traditional planing hull, and the all-carbon-fiber superstructure. The carbon fiber’s lower weight offers a big advantage over a typical fiberglass lay-up. Its automatically pushes up performance (and fuel efficiency) while also creating a stiffer running surface. The design team also shifted the 60’s center of gravity lower to help keep the boat stable when the weather gets rough.

The 60 is designed for three-season cruising, with a relatively small cockpit aft and a sunbed and forward lounge on the long forepeak. Except for cocktail hour and the occasional sunning session, the place to hang will be the interior, which combines retro-sailing influences with modern features. Lots of teak and white upholstery in the salon create a clean, timeless look, with multiple areas for socializing. The large, opening sunroof on the first 60 launched also adds another way to lighten and freshen up this main gathering point.

Even the two-person helm station has intentional throwbacks, including analog gauges (though they’re actually electronically driven) and a large-diameter teak steering wheel. The classic nautical look will leave sailors who transition into 60 owners (a not uncommon practice) feeling right at home. They will also appreciate features like joystick steering and a door to starboard that allow for better sightlines and even let the skipper step out onto the side deck while docking.

Probably one of the most impressive areas is the one that’s most hidden. Thanks to the boat’s 19-foot beam, the engine room has a generous layout with excellent working space. Besides the twin Volvo Penta IPS1200s,  owners can also opt for the lower 750 hp IPS950s, or if the owner doesn’t want pod drives, a conventional shaft is also an option.

Beyond the engines, the 60’s layout is customizable. There are options for three or four staterooms, and depending on choice, the galley can either be positioned in the aft part of the main salon or below-decks with the accommodations. Either configuration includes a full-beam main suite forward and double VIP cabin (though the suite shifts sides of the boat, depending on galley choice). Eastbay’s ability to customize is one of its strong suits in the small but competitive Downeast niche.