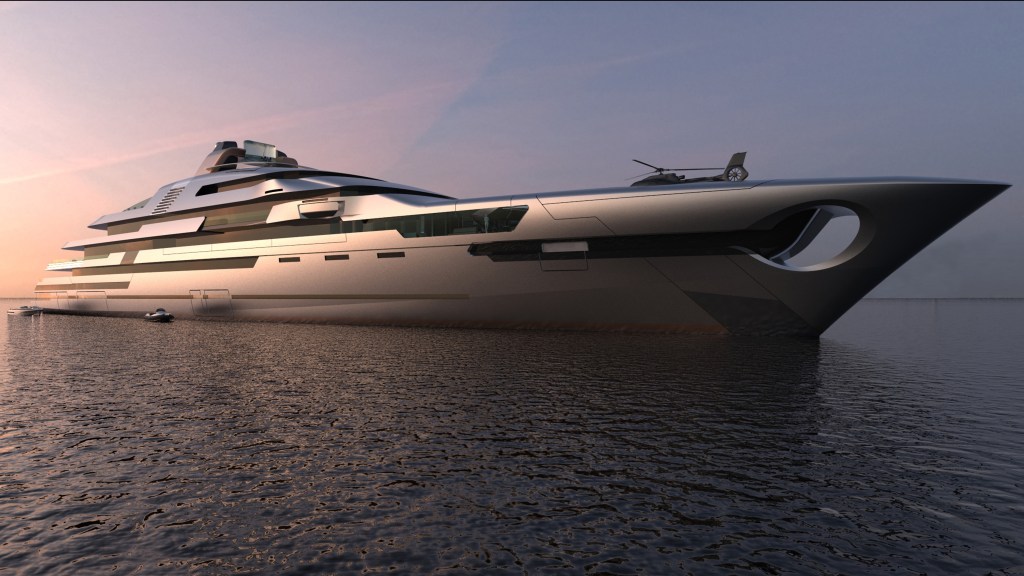 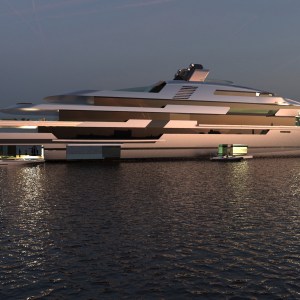 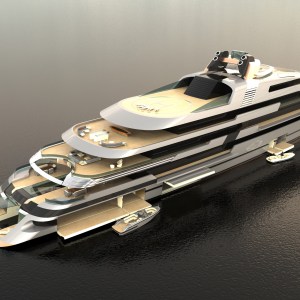 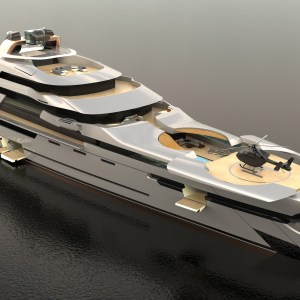 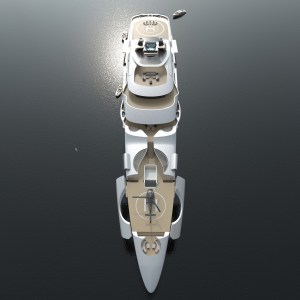 Creating a seven-deck, 460-foot oceangoing behemoth takes much more vision than supersizing a traditional yacht design. Award-winning designer Ken Freivokh’s new 140-meter concept is full of vision and ambition, while managing to carve a personality that embraces the future without turning the design into a sci-fi project. The stair-step design of the stern is not only symmetric with the gentle slope of the forward deck, but creates five levels of open decks that culminate in the large helipad on the top deck. A second certified helipad for the primary helicopter on the foredeck even has a retractable hangar for storage.

This is a yacht of multiples, from the owner’s apartment on an upper deck that connects with the rest of the yacht, via private elevator, all the way down to the owner’s cabin on the water. In this private enclave, the owners and their family will have exclusive access to the sea through a large hull-side opening far away from the guest’s beach club. In the yacht that has everything category, this beachside retreat even has a private delicatessen. A large swimming pool is part of the aft beach club, while there is another pool on the main deck forward. The beach club is enormous, with a fully equipped gym, two spas, massage rooms, and nail salon.

On most superyachts, the main saloon is about twice the space as the upper saloon, but on this yacht, they share the same large footprint. Two other saloons are also positioned on other decks. Each of the saloons has double-height headroom to expand the feeling of space. Other features that will differentiate the project: a certified IMAX cinema (as opposed to a retracting screen in a saloon), a rotating dining room that opens to side decks with folding bulwarks, and a multi-level atrium in the lobby with a glass elevator. More than anywhere else, this area gives a sense of the yacht’s grandeur and scale. The coolest feature, however, is the foredeck “bubble,” a large saloon designed into the deck with glass along the sides, providing unobstructed views of the ocean.

This gigayacht also serves as a big toy house, with a full-beam tender garage for six large tenders and a separate garage for the toys. The rear swimming pool is also designed to carry a 45-foot tender when the yacht is under way.

In addition, Freivokh designed large crew accommodations, professional galleys, and separate elevators and stairways so crew and owner/guest contact would be limited. Despite its scale, there are many small private spaces designed across the yacht.