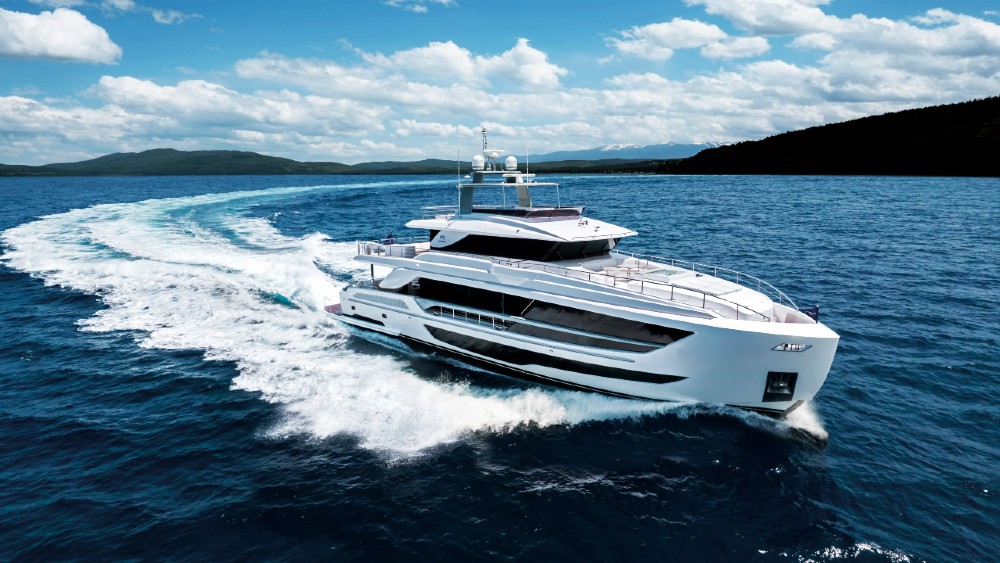 There’s no two ways of saying it. The FD series from Horizon—the latest iteration is the FD110 Tri-Deck, which we toured at the 2022 Fort Lauderdale boat show—has never had the type of lines that make most people swoon. The FDs are boxy, pluggy, and tall, an English mastiff in a world that historically favors greyhounds. And its designer, Cor D. Rover, is the first to agree.

“One of my favorite stories about the FD Series is that eight years ago, when the line first launched, I had a client come to me and say, ‘Oh, you’re Cor, the designer? Well, you’ve designed an ugly boat,” says Rover, with a laugh. “Then he stepped onboard, and ended up buying two of them.”

Why the change of heart? That answer is easy. The same bullish lines that make the FDs jarring from the outside also offer them a measure of interior volume with commensurate comfort that is quite remarkable.

The FD110 is the largest in the line (though a 125 is currently in design phase), and she is massive. The tri-deck design emphasizes large spaces on the exterior, starting with the social area on the sky-deck, with lounges and a sun bed. Below that, the sociability gets supersized: The cockpit lounge has a roll-down sunshade, drop-down television, and a wet bar with two built-in barstools to starboard.

The forepeak lounge has the requisite sun pad and removable awning, and also has the option of a Jacuzzi. It’s a smart, out-of-the-way place to put one of the more private features of the yacht. Lastly, a massive flying bridge yawns aft from the pilothouse, and houses an alfresco dining table, a propane grill, and a Steelhead Marine CT2500 davit for tender-launching duties. (Other water toys can be stowed on a hydraulic swim platform that can rise up ten inches to keep everything dry while under way.)

Inside, the main salon is open-plan and surrounded by large windows, with a dining area. The yacht has four staterooms on the lower deck. The forepeak VIP benefits from the extra volume of a beam that carries well forward, while two mirroring guest staterooms at amidships would pass for VIPs on most yachts with this LOA.

The main-deck master is rare a stateroom on a 110-footer (actually the boat measures 111’6″). It has a flush deck, without any stairs. The full-beam design, with large side windows, also includes unusual features like ceiling-to-sole, cedar-lined hanging lockers and heated towel racks in the en suite. The hanging lockers point to the yacht’s long-term livability potential, while the towel warmers add a nice touch of luxury and comfort.

If you can swallow the FD110’s exterior appearance, you’ll quickly discover its inner beauty. “This isn’t the kind of yacht that glides into a harbor and people point to and say ‘Oh, I love that boat,'” says Rover. “It’s a vessel people need to step aboard. Then they’ll say, ‘Oh I love this boat.‘”