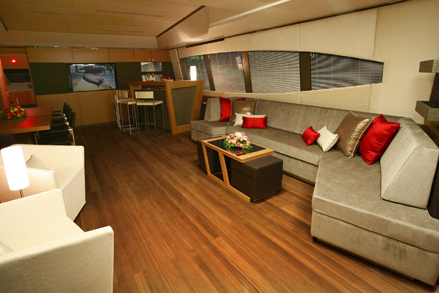 The first DeBirs 100 Sports Yacht, launched at Cannes in early September, gained instant fanfare for the shipyard based in Alexandria, Egypt. The DeBirs name is actually a highly respected Dutch yard that was reestablished by a group of European yacht designers and American executives from the aviation industry. The plan was to introduce advanced aviation engineering to the yacht-building world, while also taking advantage of Alexandria’s skilled, but relatively inexpensive pool of boatbuilders.

The yacht is an engineering and aesthetic triumph for DeBirs, which has focused on smaller, more traditional-looking motoryachts. The profile has a sleek, Eurostyle look, reminiscent of sportyachts like Azimut S103 or the Riva 90 Duchessa. The Italtecnica/Arrabito-designed hull tops out at 28 knots with twin 2000-hp MTU engines. It’s also about 30 percent lower in price than similar style boats.

The modern interior, designed by Egg and Dart of Munich, also includes a voluminous space defined by light-colored woods, fabrics, and contemporary furnishings. The first 100 have a full-beam master stateroom, with vertical hullside windows that offer tremendous light, along with four other roomy, bright guest cabins. The 100 also has a mini-flybridge that does not compromise the sleek profile but provides extra space for socializing. It’s an impressive launch for a young yard that promises to carry on DeBirs’ good name.