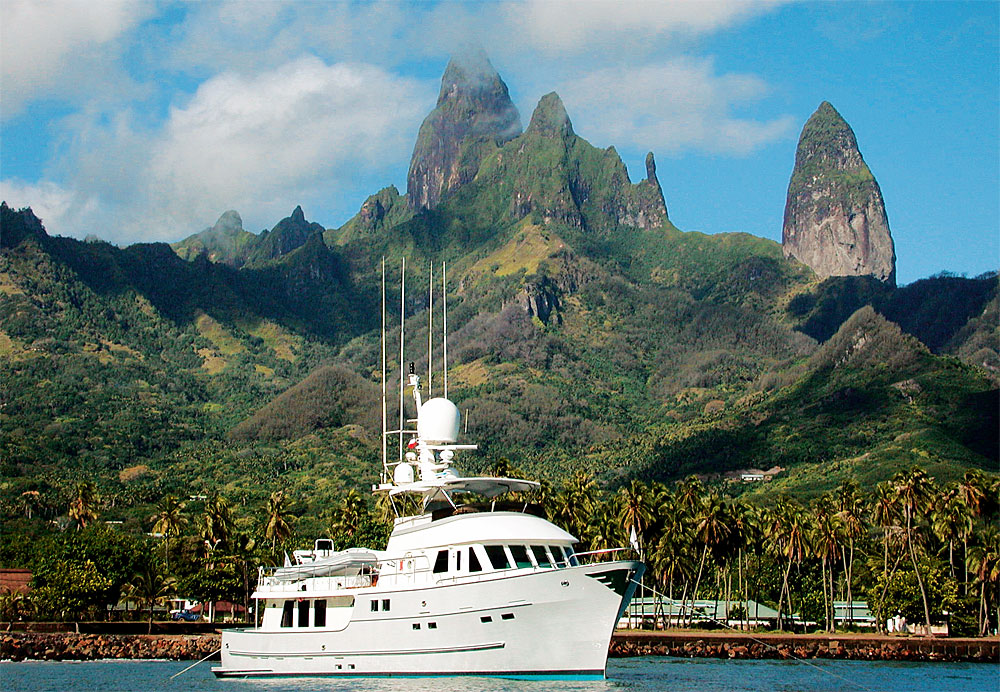 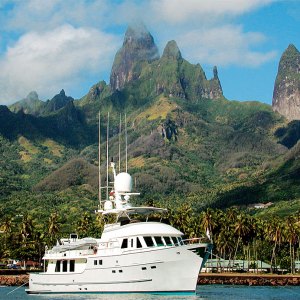 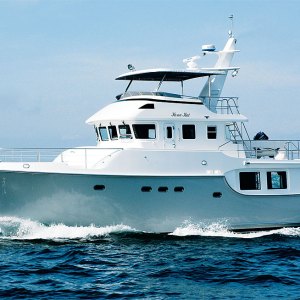 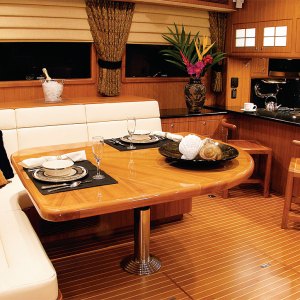 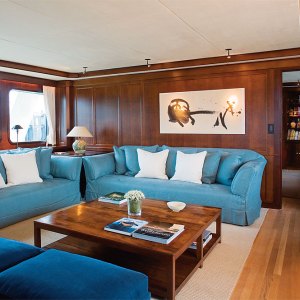 Roger Allard, his wife, Joan, and their 10-year-old daughter, Kimberly, have spent the last two years cruising leisurely around the South Pacific aboard New Paige, a Nordhavn 55 expedition yacht. “Every day is different, and every day offers challenges,” says Roger, speaking from Tahiti. “But what we like best about this lifestyle is that it’s a unique family experience away from the routine.”

On their blog, the Allards record Robinson Crusoe–like adventures such as swimming with sharks and hiking through the hills of the Marquesas Islands. The family spent several weeks in the atolls of Tuamotu, where they went scuba diving in one of the richest marine ecosystems in the world. They also enjoyed pig roasts on the beach with locals. “There isn’t much tourism in some of these areas, so the people tend to be friendly,” says Roger, who adds that he and his family will continue their voyage at least until they reach Australia in 2009. “We’ve agreed that we will keep going until it no longer feels like an adventure.”

New Paige is the Allards’ second Nordhavn boat: Their first was a 40-footer that served as their home while they cruised from Alaska to Mexico for 18 months in 2004 and 2005. “We wanted more room to carry scuba gear, kayaks, dive scooters, and two R.I.B. [rigid inflatable boat] tenders,” Roger says. “The 55-footer allows us to have our toys and space.”

Most yacht owners do not have time for extended adventures like the Allards’, but many share the family’s passion for exploring distant corners of the globe. This desire to escape has helped cause sales of expedition yachts—rugged, somewhat utilitarian vessels that travel long distances and remain stable in the roughest seas—to rise dramatically over the past decade. Yards such as Newcastle Marine, Delta, Aleutian Yachts, Feadship, and Northern Marine that construct large, custom expedition yachts expect sales in the category to increase, as do small-yacht manufacturers such as Nordhavn, Sea Spirit, and Nordic Tugs.

“Fifteen years ago, there was no such thing as an [expedition] yacht,” points out John DeCaro, the owner of All Ocean Yachts in Fort Lauderdale, Fla. “But now people are comparing expedition yachts’ costs of operation to those of luxury yachts, and they are favorably impressed.” In addition, DeCaro notes, designs are evolving from the boxy, commercial-looking vessels of the past. “The lines are softer now, and the interiors much more stylish.”

eyond favorable cost comparisons, expedition yachts have a value proposition in that their hull designs allow owners to cross oceans in relatively small vessels, says Bruce Johnson, executive vice president and chief designer at Sparkman & Stephens in New York. The renowned design firm has created many America’s Cup yachts and oceangoing sailboats, and its latest project is the Sea Spirit Passagemaker 60, an expedition yacht that is powered by a single 340 hp diesel engine and that offers an estimated range of 4,000 miles. “We take the design of these vessels seriously, because peoples’ lives depend on them,” Johnson says. “That’s why we built redundant systems and multiple waterproof compartments in the Passagemaker 60. We also tank-tested the boat to try out a number of different bulbous bow and stern configurations. We are pleased with the results.”

Ed Koethe, the new owner of a Passagemaker 60 that he christened Dauntless, is also satisfied. “I’ve been traveling on it for three months now, and I still have difficulty believing it’s mine,” says Koethe during his yacht’s recent shakedown cruise near Sitka, Alaska. “This is the culmination of a 10-year dream.” Koethe, a lifelong mariner from Ohio, says that he had been searching for an expedition-style trawler since the late 1990s, and he discovered the Passagemaker 60 after contacting Sparkman & Stephens two years ago. He liked the combination of a functional, salty exterior and a well-appointed interior of rich teak, leather, and granite. The ship also has a full battery of advanced electronics. “Dauntless has performed wonderfully,” Koethe says. “We hit nasty seas in Queen Charlotte Sound, but the boat was so gentle we could move around with no problems.”

After exploring Alaska, Koethe and his wife, Carol, will head south to Mexico and through the Panama Canal. Next spring they will bring the boat north along the Atlantic, down the St. Lawrence Seaway, and into the Great Lakes. “It’s a big adventure—14,000 miles lie ahead,” Koethe says. “But it’s been a long time coming, and it feels like we’re really living.”

Owners of expedition yachts like Allard and Koethe speak frequently of how roomy and comfortable their vessels are. Jim Leishman, cofounder of Nordhavn—the Dana Point, Calif.–based company that designed and built the Allards’ New Paige—says that an upsizing trend is under way in the yachting industry. “We began in the ’70s by selling sailboats to retirees who wanted to travel the world in their own boats,” Leishman says. Most of these buyers purchased the firm’s original 40-footer until about 2004, he says, when the 55 became the Nordhavn of choice. The company is now building its second 120-footer.

“Our customers have been everywhere,” Leishman notes. “One owner has circumnavigated the world twice, and has put over 80,000 miles on his boat. He plans to attempt the Northwest Passage next year.”

ot all expedition yachts start out as adventure vessels. In fact, the growing demand for adventure-ready designs has given rise to services that convert research vessels, tugboats, and maintenance craft into comfortable, rugged yachts.

According to Michael Rafferty, a yacht broker with Camper & Nicholsons in Palm Beach, Fla., the appeal of recent notable conversions, such as the 255-foot Lone Ranger, or of upgrades and refits, like the 152-foot Putty VI, has everything to do with time and money. “There is a three-year backup in the shipyards right now for new boats, but you can get a conversion done right away,” he says. “What’s more, converting a commercial vessel is often only about 50 percent the cost of a new build.”

Tom Gonzales founded Shadow Marine in Fort Lauderdale, Fla., three years ago to make yachts out of old commercial vessels that still had plenty of life left in them. “We originally converted them into assistance boats that would carry a mother ship’s toys and helicopters and house its crew, so the owners could use the free space on the primary yacht,” Gonzales says. “But then our owners began to put in nice interiors, which led us to develop the SUV—support utility vessel—concept. It’s different from other expedition yachts because it offers the space to carry everything an owner needs onboard. If an owner chooses, [the vessel] can also serve as a shadow boat. It’s a very versatile type of yacht.”

Shadow Marine currently converts expedition craft that range in length from 165 feet to 300-plus feet. Several of these reworked vessels have toured the Mediterranean as support boats, while others have been beautifully appointed and are now used as primary yachts. The firm’s most recent launch is a 185-foot Paladin-class vessel that will serve as a scuba and security platform for a Middle Eastern family that owns five other superyachts. “We’re excited about where this shadow-boat concept is evolving,” Gonzales says. “We’re now looking at constructing new builds in addition to doing conversions. Even though we rebuild the entire yacht during a conversion, some owners prefer to have brand-new boats.”

Whether expedition yachts are old or new, their promise of adventure no doubt will drive the growing market further still. Having logged 40,000 miles in the seas around Europe and in the South Pacific on their 75-foot Northern Marine yacht Starr, Don and Sharry Stabbert have seen that promise become a reality.

“I love the slow pace aboard the boat,” Don says. “But I think the best thing about [this type of travel] is the people we’ve met.” Don recalls that several years ago, upon returning to a favorite port of call in the Marquesas Islands, he and Sharry were greeted by the locals with a heartfelt “welcome home.”