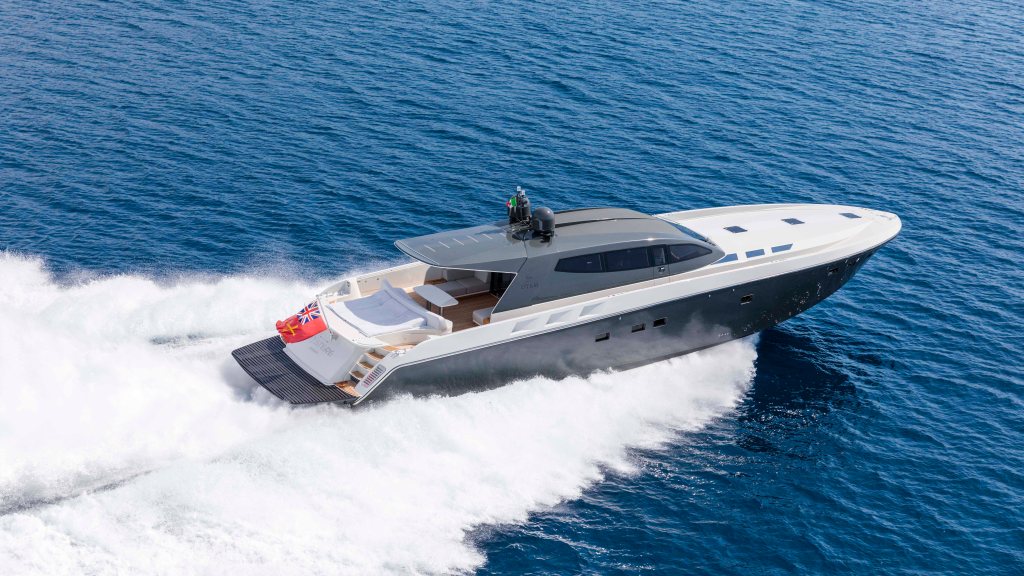 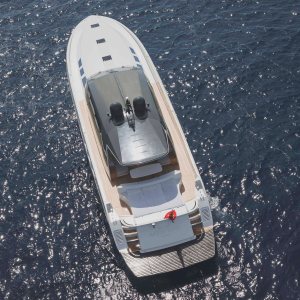 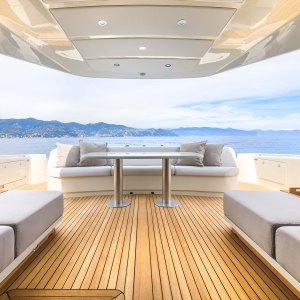 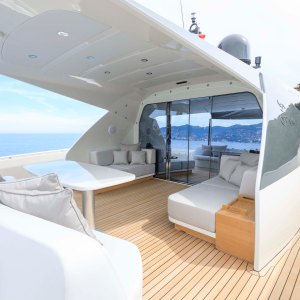 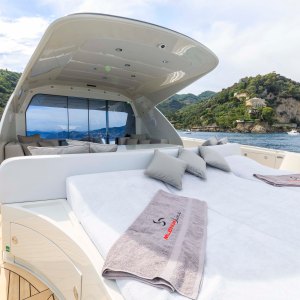 Otam’s new Millennium 80 Mystere is the latest model of its Millennium line, a sleek 80-foot speed demon that surged past 48 knots in its first sea trial. While Otam has ventured into the superyacht category with last year’s launch of the Custom Range 115-foot Gipsy, the Italian builder remains focused on its go-fast luxury yachts. Mystere, with its sleek hull and low-riding hardtop, uses a deceptively simple profile, without curves or elaborate exterior designs, to convey its speed. The yacht just looks fast.

Otam heavily modifies all its boats so that they’re often closer to custom than semi-custom. On Mystere, instead of using conventional quadruple engines, the owner opted for twin MTU M94 engines that produce 2,600 hp, coupled to Arneson surface-piercing drives. On top of the 48-knot top end, the boat cruises at a brisk 41 knots. Fewer engines also created more interior space, allowing Otam to design two owner’s suites instead of a single, along with a VIP cabin, separate galley, and two crew cabins in the bow area. The yard was also able to fulfill the owner’s request of having a flush deck, with zero steps into his stateroom.

The interior is contemporary, with the use of natural teak floors, lacquered ebony wood with chromed steel inserts, and carpeting made of silk and cashmere. Fit and finish is impeccable. The area under the hardtop is where Mystere really shines. It’s connected to the aft cockpit by nearly full-beam sliding doors, giving the option of joining it to the great outdoors or turning the area into an enclosed saloon. Aft are lounges on either side of the carpeted sole, while forward, opposite the helm, are a wine chiller, fridge, and a two-top stove, so snacks don’t always have to be prepared in the professional galley in the cabin.

Otam is one of those builders that understands that what is behind the boat’s bulkheads is just as important as well-crafted floors or cabinets. The yard focused on heavily soundproofing Mystere, with double-thickness insulation around the engine room and owner’s suites. With the generator running and the air-conditioning at 80-percent load, decibel levels are only 44 dB, which is much quieter than a normal conversation at home. Mystere will make its first public appearance at the Cannes Yachting Festival in September.