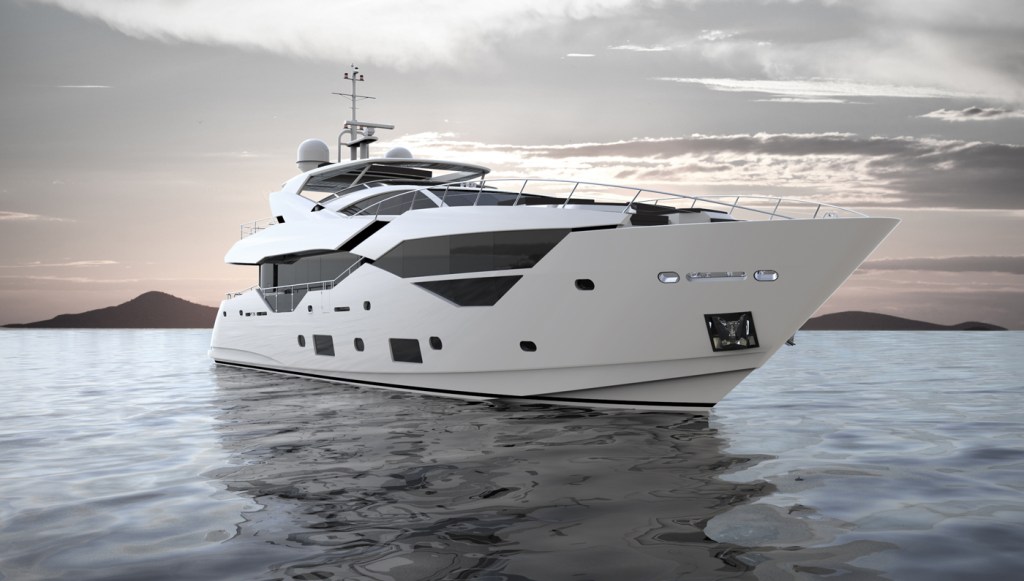 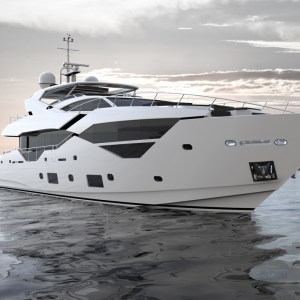 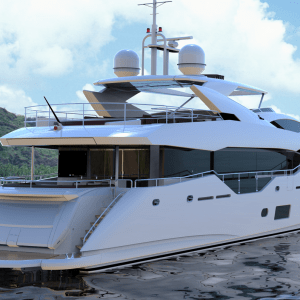 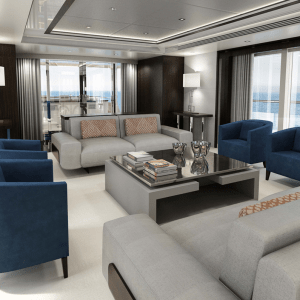 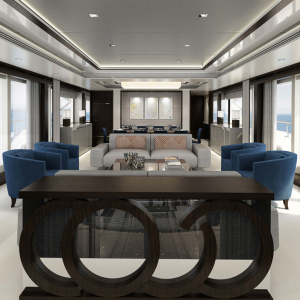 The new Sunseeker 116 Yacht is the third superyacht from the British builder to be launched this year and was first announced in June 2015 along with exclusive images. Subsequently, the Sunseeker 131 Yacht was introduced at the London Boat Show in January, while the 116 Yacht and the 95 Yacht will be debuted this year at the September boat shows. The 116 Yacht’s superyacht hat trick is no surprise, as Sunseeker recently celebrated having delivered 100 yachts that measure over 100 feet.

Replacing the 115 Yacht, the new 116 Yacht’s exterior is defined by curves and straight-edged lines, employing a design formula that has proven successful for Sunseeker over the years. But the 116 carries it a step further, using angular windows to visually join the hull and superstructure in a new way. The profile, equal parts jarring and balanced, exudes a singular elegance—sure to turn heads at any marina.

Beyond the aesthetics, the design team focused closely on the yacht’s social potential. Thanks in part to a 24-foot beam, the 116 Yacht’s foredeck creates a spacious gathering point, ideal for a sunset cruise or midday siesta. It has been developed into a whole entertainment area of its own, with a new “club” concept and the option of a large hot tub. The flybridge lends itself to large social events as well, boasting a huge retractable sunroof and an exceptionally generous seating and dining area, with space for a wet bar, sun-loungers, companion helm seating, and a standard hot tub. On the aft end, the cockpit turns alfresco dining into a more intimate affair.

While the 116 Yacht’s interior can be customized to the owner’s discretion, Sunseeker chose a contemporary design for the current yacht’s interior, though the open-play layout looks a bit more traditional than the exterior. Tall windows bathe the large saloons and formal dining room in natural light, while the master suite’s expansive hull-side windows make the space seem more like a luxurious waterfront apartment than a yacht’s stateroom. The suite’s location on the main deck also provides a nice sense of privacy. The four staterooms belowdecks offer two queens and two doubles, all en suite.

The 116 Yacht cruises at 16 to 18 knots or a top speed up to 26 knots (depending upon the engine option chosen), with a range of 1,250 nautical miles. Speed has always been a Sunseeker hallmark, even for its large yachts. The 116 Yacht is based on the classic Sunseeker “deep V hull,” ensuring it maintains exhilarating performance at its core, equally at home cruising in comfort or running at full throttle to make the heart race. The builder also prides itself on its Bespoke service that allows clients to customize any yacht above 100 feet—from specific floor plans to furnishings to materials. This latest generation of Sunseekers promises to propel its superyacht line forward. (sunseeker.com)