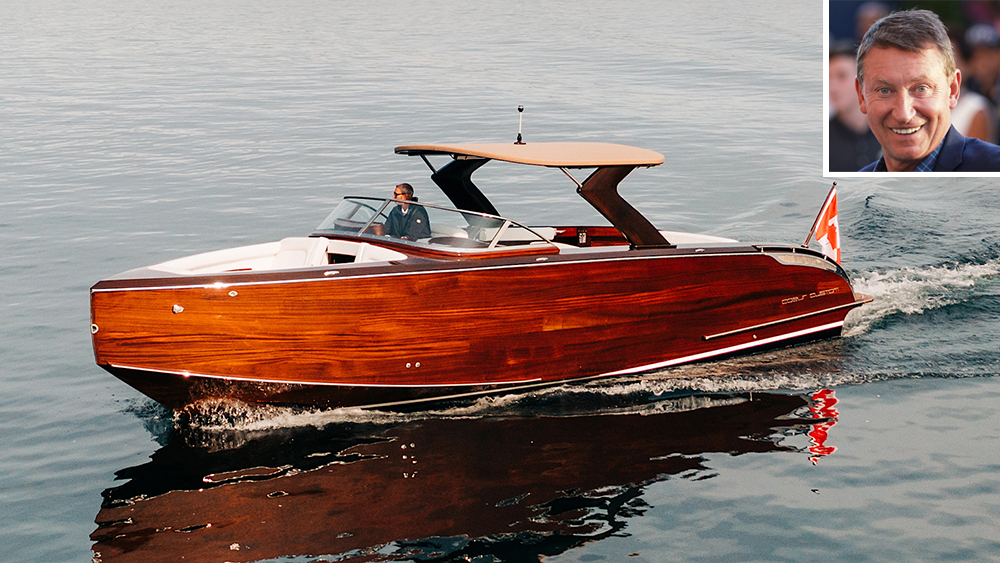 It will surely come down to a toss of a coin as to what will spin more heads on Idaho’s shimmering Lake Coeur d’Alene this summer; the sight of this gleaming, mirror-varnished 34-foot wooden cruiser with its distinctive plumb bow. Or the tall guy behind the wheel with the number ’99’ on his sweatshirt? The boat doesn’t have a name yet, but it promises to cut a quite a figure on a lake already known for its classic wooden boats.

“We literally had a couple of days enjoying the boat before we left town. But we’re heading back next week, the boat goes back in the water, and then we’ll have the entire summer on the lake to have fun,” Gretzky tells Robb Report.

The gleaming wooden boat is made of sapele with 12 coats of varnish, white upholstery and a trendy hardtop.  Courtesy Coeur Custom

The Steinway was designed and hand-built for the Gretzkys by Coeur d’Alene wooden-boat specialists, Coeur Custom. Crafted from sapele hardwood using traditional double-planked construction, the open-bow day cruiser glows with its 16 coats of varnish and shiny stainless-steel trim.

“The couple wanted a classic day boat, with lots of space for family and friends, plus plenty of performance combined with a smooth ride,” says Jim Brown, Coeur Custom’s chief designer. “We’ve built a lot of beautiful boats over the years. But to me, this one is, without doubt, the finest, the most remarkable, with all the style and detail.”

While Gretzky admits to taking a back seat when it came to any design input, he boasts that the elegant all-white interior is the work of his wife Janet. Custom features she created include cushions embroidered with her famous husband’s ’99’ team jersey logo.

“She’s the creative one in the family; the only thing I asked for was to have a Canadian flag at the back,” Gretzky says.

The Steinway—named after the famous piano maker—features stretch-out seating for up to 12, a deep, open-bow area with loungers, an oversized main cockpit with sofas, and a large upholstered sunpad at the stern. To keep family and friends fed and watered, there’s a fridge and icemaker, marble countertop with a small sink, and plenty of storage for snacks. The galley is covered by the boat’s hardtop which features a deployable electric bimini top to shade the rear seats.

Janet Gretzky designed the interior in all white, a nice contrast with the dark red wood of the boat.  Courtesy Coeur Custom

Family-friendly design features also include extra-high hull sides for safety, and a side-access door to make it easier to get aboard. Plus, a curved, stainless-steel-framed windshield for protection from the elements. There’s also a toilet compartment and sink in a walk-through between the cockpit and bow.

For get-up and go, the Steinway comes with a pair of Mercury 8.2-liter, 430-horsepower gas inboard engines coupled to Bravo III outdrives with joystick control. They’ll comfortably push the boat to a 50-mph top speed.

“The boatyard told me it would go fast, but to tell you the truth, I’m not too bothered about that,” says Gretzsky. “I was relatively fast when I skated, but these days I drive my car slow. I’m happy to drive my boat slow. I’ll take comfort over speed any day.” That’s a big statement coming from an NHL great with a record 894 goals and 1,963 assists.

While the Gretzkys plan to make full use of their new boat this summer, they’re taking time to show it off at this year’s Coeur d’Alene Antique and Classic Boat Festival on August 13.  “It’s a huge show attracting up to 40,000 people,” says Brown. “It’s so gracious for the Gretzkys to let people get the chance to see it.”

Brown and his team are currently rushing to complete a second Steinway 340 HT cruiser in time for the Coeur d’Alene festival. While most of the specs are the same as the original, the different colors, seat layout and windshield will distinguish it from Gretzky’s boat. The builder declines to name the price for first hull, but says the second hull in the series will be priced in the $800,000 to $900,000 range.

“We’re really looking forward to seeing the Gretzky family out on the lake this summer,” says Brown. “The boat will definitely be hard to miss—just look for that Canadian flag.”

These details show the quality of the build.