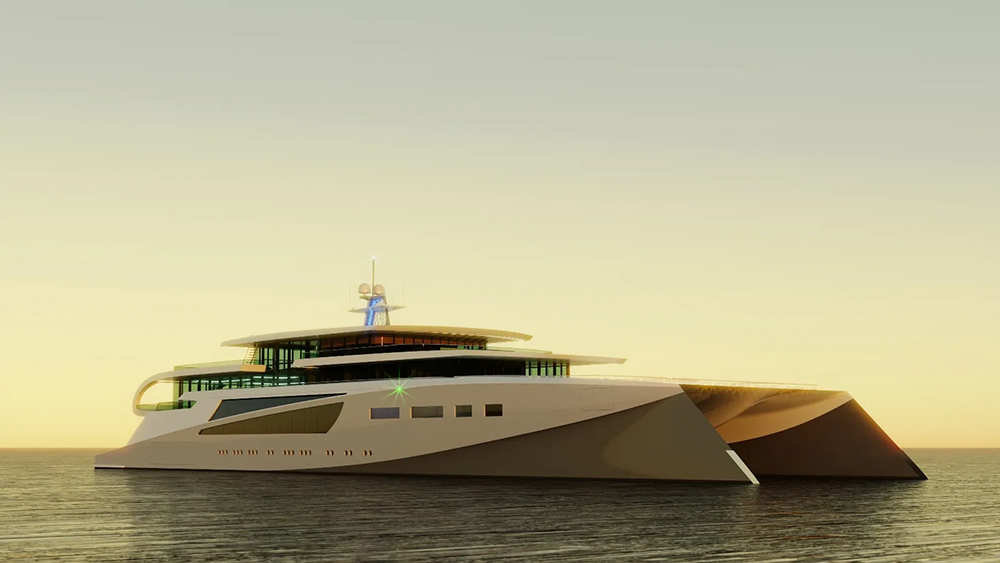 The Australian studio, which has been churning out designs for the past two decades, has just unveiled a new multihull concept with living quarters that are not only big but beautiful, too.

The sleek cat, known as Project M, spans 266 feet from tip to tail and has a beam of 72 feet. This gives her a vast 2,690 GT interior that is characterized by “soaring ceilings and palatial partying spaces.” Another key feature is the large glass panels and windows that run across the superstructure.

“The extensive glazing makes this a yacht of light,” studio founder and lead designer Nick Stark said in a statement. “The key to this design was to bring the outside in, to respect and admire the beauty of the world while simultaneously providing sanctuary from the elements and also symbolically from life’s ceaseless complications.”

Starting with the main deck, there’s a generous lounge with a grand piano and theater, along with ample guest accommodation, a few offices and the wheelhouse. Above, the dedicated owner’s deck comes complete with an expansive owner’s suite, a lounge and a Jacuzzi. This upper deck also sports an outdoor terrace equipped with a pool, DJ booth and custom lighting.

There are three spots to store your tenders.  Nick Stark Design

Elsewhere, Project M is fitted with two helipads: one is located aft on the sun deck; the other lies forward toward the bow. She also houses three tender garages, one of which sits between the hulls and doubles as a beach club deck when raised.

Glass panels throughout bring the outside in.  Nick Stark Design

In addition to Project M, Stark recently delivered a 210-foot superyacht concept dubbed Project Grace and a 308-foot hybrid design called Project Crystal. This appears to be the studio’s first multihull, though. Not a bad start at first blush.