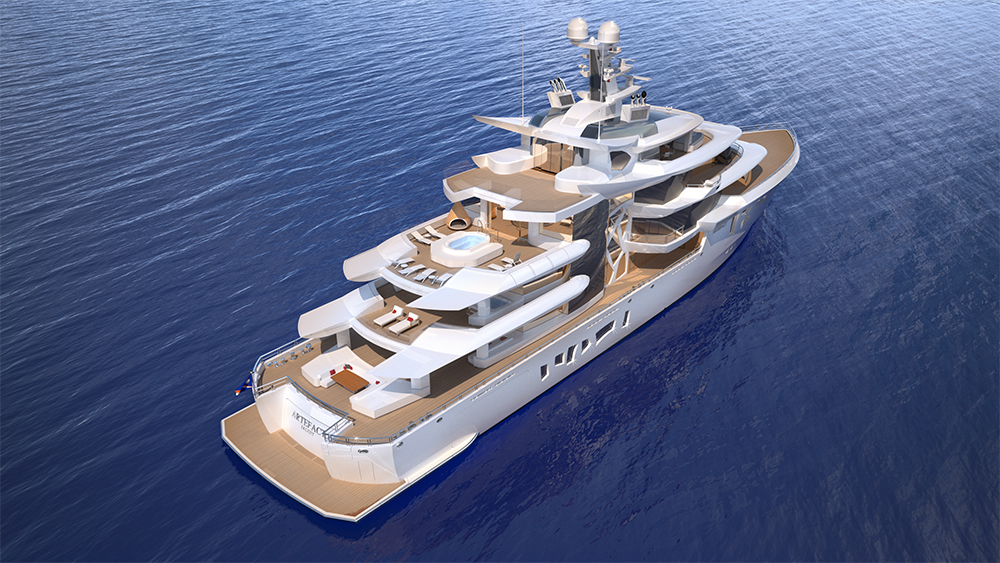 Everyone loves a good scale model, especially when it’s giving us a sneak peek of a grand and glorious future. That’s exactly what we got at the Monaco Yacht Show last month, when a scale model of the newest project to come from the Nobiskrug team was unveiled. Project 790—now known as Artefact—is the first hybrid superyacht to have a DC bus, batteries, and a variable-speed ABB Pod propulsion system. Captain Aaron T. Clark commented that “many traditional aspects of superyachts’ [general arrangements] have been challenged and reimagined in this design to create an unprecedented experience while minimizing impact on fragile marine ecosystems.”

The yacht’s exterior design was completed by Gregory Marshall Studio in Canada with interior styling by London’s Reymond Langton Design. The plans followed the owners’ strict guidelines that would reflect their commitment to the environment, while also allowing maximum comfort on board. To accomplish that, the traditional arrangement has been turned on its head, with the master stateroom situated aft, instead of at the bow, and guest areas are placed in low-acceleration zones.

Nobiskrug’s Artefact is scheduled for a 2019 delivery.  Photo: Courtesy of Nobiskrug

Due to the new technological features, not only will Artefact issue lower emissions, the yacht will offer a smoother, quieter ride without the usual noise and vibration levels. Following numerous stories about the destruction of our sea beds by large anchors and increased marine traffic, a Dynamic Positioning System has been added to allow the yacht to hold its position for longer before needing the use of an anchor.

While moving toward greener technology has been growing within the superyacht industry throughout the last couple of decades, it is with the advancements in design and technology that we are really able to see new growth here. Vesna Bloetz, Nobiskrug’s marketing manager, says, “We are grateful to have the opportunity to work with such visionary owners and appreciate very much their involvement in pushing the boundaries for what is possible in marrying the eco-conscious science in yacht projects.” With more and more owners investing their own time and money into the research and development of eco-friendly solutions, the industry is able to create new pathways in the area.

“Artefact is a perfect marriage of art and science through innovative architectural design and advanced engineering,” says Holger Kahl, managing director at Nobiskrug. The yacht will be delivered to its owner in 2019.