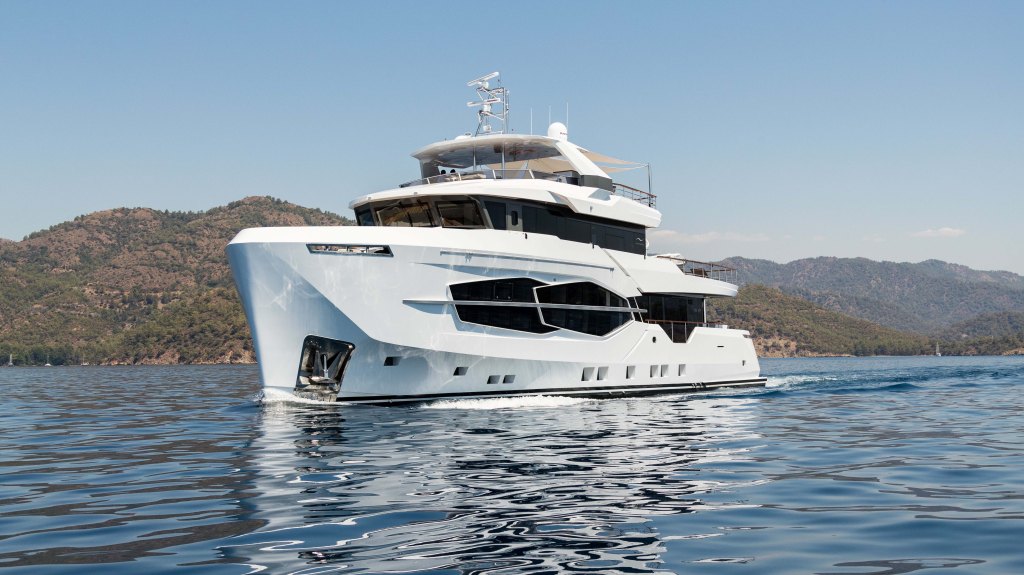 Numarine, known for creative twists on conventional designs, will launch two explorer yachts this September at the Cannes Yachting Festival. Designer Can Yalman added some unusual features to the new yachts, including angular windows, vertical bows, and large exterior spaces. Naval architect Umberto Tagliavini designed the hulls for running long distances in the ocean. The Istanbul builder also partnered with Silent Line to reduce the sources of noise and vibration, adapting technologies from much larger superyachts.

The 26XP, making its world premiere in Cannes, is unlike the trawler configuration of many mini-explorers. The 86-footer has the smart layout of a bigger yacht, with four large guest cabins on the lower deck, featuring a large master suite amidships, along with a VIP and two twins. On the main deck, the open saloon has full-height windows that bathe the interior in natural light. The upper deck on the 26XP is also a large area, covering about two-thirds of the hull length, with about 1,000 square feet of floor space. It has an open aft area large enough for a 20-foot tender. The yacht can be built with either a semi-planing or full-displacement hull, depending on the owner’s need for speed and distance. With the displacement hull, the 26XP has a top speed of 13.5 knots, with a friendly cruise at 9 knots. At 8 knots, it has a range of 3,000 nautical miles. The semi-planing version has larger, more powerful engines that more than double the speed to 28 knots.

The 32XP, enjoying its European debut at Cannes, is actually a boat launched for an owner last summer. The 107-foot Marla was designed with large volumes of internal living areas, built into a fiberglass superstructure mated to a steel hull. The owner wanted a simple, elegant interior, with no pomp or frills, so he could enjoy being on board the yacht for weeks at a time. Marla can accommodate up to 12 guests. The 430-square-foot owner’s cabin is the showroom of the yacht, though the 515-square-foot saloon is not far behind with its large size and delivery of natural light. The boat also has its own gym, professional galley, and enough deck space for a 20-foot tender and two personal watercraft. Yalman made sure to maximize the external spaces. On the upper deck, owners and guests can spread out along the 1,400 square feet of terraces and decks, while the flybridge adds another 645 square feet of space for entertaining. The steel hull was designed for long-distance traveling, offering a top speed of 14 knots. At 9 knots, it has transatlantic range of 4,000 nautical miles.