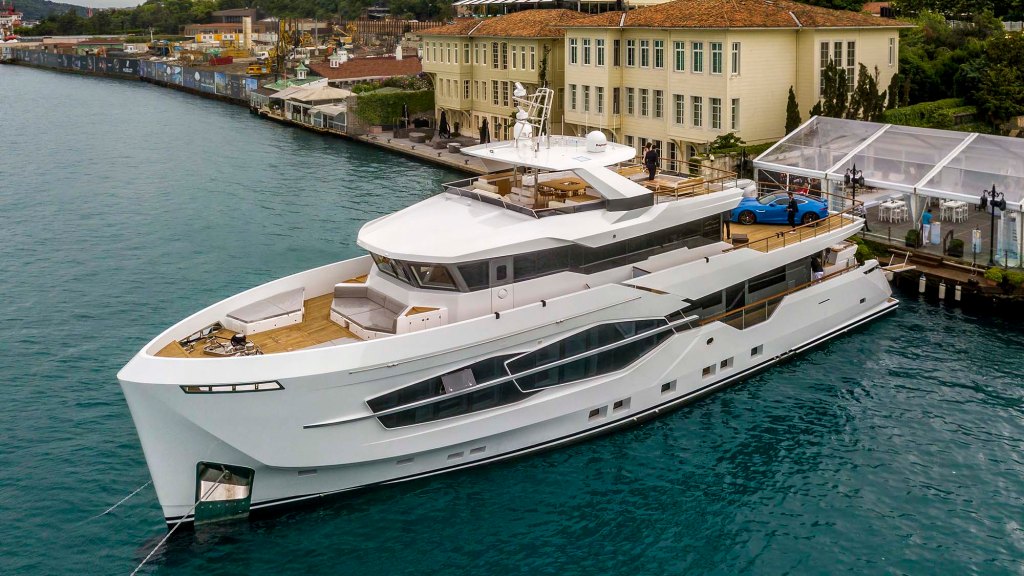 Numarine has launched its first explorer yacht with a go-anywhere steel hull, but the sheer space for owners and guests surpasses just about any other yacht in its 105-foot class. The 32XP yacht has more than 3,550 square feet of living/social space, with 515 square feet in the saloon alone. The owner’s stateroom has about 430 square feet, and the four guest staterooms total nearly 1,000. What the numbers add up to, combined with floor-to-ceiling windows in some areas, is an overall sense of light and space. The 32XP may be able to cross long distances with its 3,000-mile range, but it’ll always feel like a spacious, homey environment.

The hull by Umberto Tagliavini was designed for efficiency, with a top speed of 14 knots, via twin 2,100 hp Caterpillar engines. It cruises at 12 knots, although at 9 the yacht has maximum range. Beyond its intrepid-looking hull, the superstructure is unusually contemporary for an explorer yacht, with serrated curves in the superstructure areas over the windows and a jaunty hardtop on the top deck. Other features like the ship’s bridge, aft deck for storing tenders and even a car, and the open bow area look more like a traditional explorer design. The Turkish yard did a great job balancing the different elements to create an attractive package.

The 645-square-foot flybridge is a typical party platform, with sofas, a dining table for 12, and a full wet bar. It’s as lavish as any superyacht. On the deck below, the owner’s cabin includes a walk-in closet, bathroom, and—a superior feature—exclusive access to the aft deck. The owner also opted for a second master suite on the main deck, with a large bedroom and separate his-and-her bathrooms that share a large rain-forest shower. On the same deck, a professional galley (with four full-size fridges, freezers, and cooking equipment for long voyages) connects via a pantry to the open-plan saloon. Two VIP and two double cabins on the deck below, along with crew quarters for five via a separate entrance, complete the accommodations.

With its longstanding partner, Silent Line, Numarine paid particular attention to reducing noise and vibration on the 32XP. Numarine said it surpassed RINA’s “Comfort Class” standards in the 50-meter (165-foot) class. The new flagship is a sea change from Numarine’s current line of sporty, futuristic-looking motor yachts, but the 32XP’s intrepid hull, rugged good looks, and practical layout should attract a new class of clients for the Turkish yard.