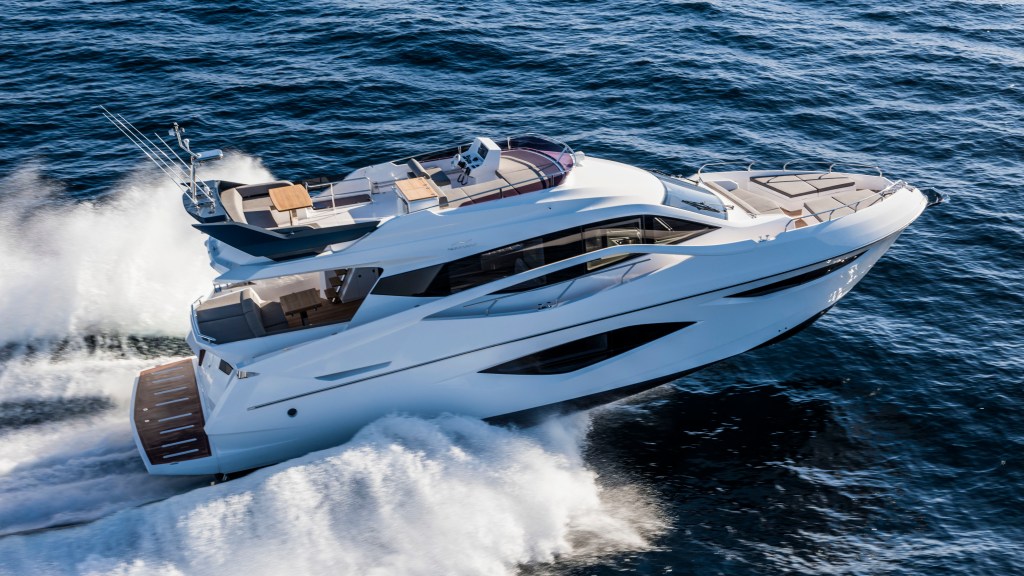 Numarine has made a strong name for itself by building fast, stylish motor yachts with a strong quality-focused foundation. Its new 62Fly is no exception. The build includes a foam-cored, vacuum-infused hull and superstructure, with an emphasis on reducing noise and vibration. Using the same top-tier materials and craftsmen, Numarine’s new baby shares the same quality DNA as the rest of the line, including the 105-foot flagship.

In-house designer Can Yalman was responsible for the 62Fly’s sporty lines and low-riding flybridge with its large, open overhang at the rear. The interior is also all about light and space, with an open saloon that features rear doors that retract fully to join the interior and rear cockpit. This seamless integration of indoors and out extends across much of the 62-foot yacht, with electric forward saloon windows that open with the push of a button and portholes in the stateroom’s windows that also slide open. Beyond aesthetics, the designers wanted to ensure a consistent flow of fresh air through the boat as a viable alternative to air conditioning.

The saloon has a bright, minimalist look, with the large picture windows and white walls. It’s a look similar to many contemporary Italian flybridge yachts, and like the best of those yachts, Numarine included fine details like stainless-steel accents and hand-stitched leather on the stair rails. These spell the difference between a me-too motor yacht and an instant classic.

The natural light theme carries to the full-beam owner’s suite belowdecks, which has a large picture window at water level for an unrivaled view. The two other guest staterooms also have large windows, and all three cabins have en-suite bathrooms. The decision to include the galley without walls in the saloon, with the dining table situated across, was a smart one since it leaves the saloon wide open. With sofas at the rear, the area feels like one large gathering point. Numarine also used every inch of space on the exterior for social areas, including the larger-than-expected flybridge, generous space on the bow, and an aft cockpit table for alfresco dining.

Naval architect Umberto Tagliavini designed the planing hull for offshore cruising, with a deep forefoot and specially shaped strakes developed with computational fluid dynamics to enhance performance. The boat can be powered with Volvo IPS drives or straight-shaft MAN engines. With the upgraded Volvo IPS 1200, the 62Fly has a top end of 35 knots and 28-knot cruise speed. Two 1,200 hp MAN diesel engines give it a top speed of 36.5 knots. The 62Fly will make its public debut at the Cannes Yachting Festival in September.