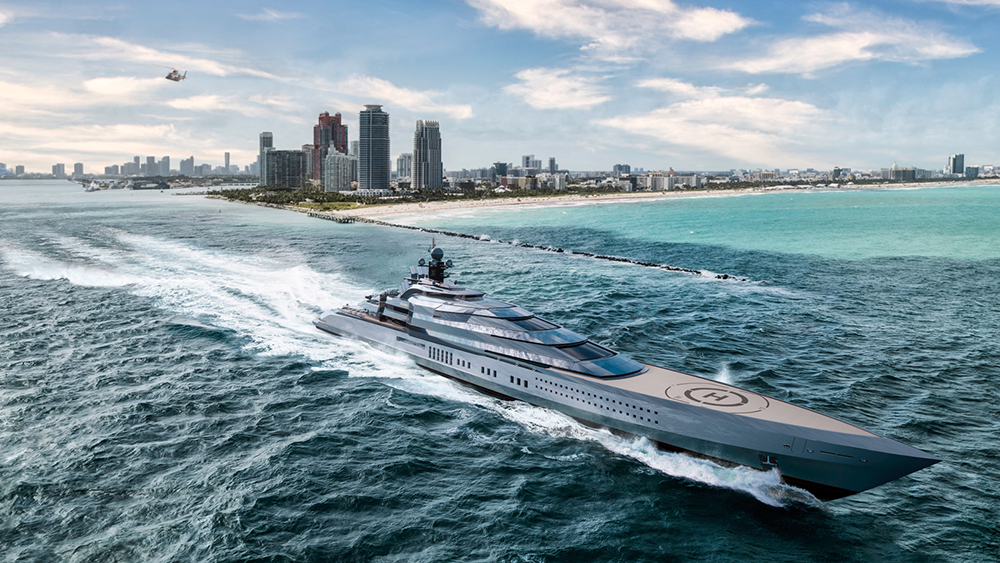 With a name like Centerfold, you’d expect nothing less than to draw attention. That’s certainly the case with Nuvolari Lenard’s latest eye-catching hybrid superyacht concept, even if it is stealthy quiet.

The Italian studio, known for such impressive superyachts as Nord, Enzo and Black Pearl, unveiled the epic 663-foot Centerfold on Tuesday with the goal of challenging the status quo. The behemoth is built from high tensile steel and aluminum, and characterized by sleek lines and a razor-sharp bow designed to help increase efficiency at sea. More importantly, the hybrid vessel is equipped with state-of-the-art tech engineered to reduce her carbon footprint.

Seafarers can pick between various types of propulsion to suit their specific surroundings and needs. The all-electric “Stealth Mode,” for instance, allows for cruising sans noise and pollution, making it perfect for areas that have stringent emissions regulations. The traditional propulsion setup, meanwhile, comprises powerful 100,000 hp engines that propel the superyacht to more than 35 knots for high-speed jaunts. There will also be a number of other propulsion modes available with varying levels of performance, according to Nuvolari Lenard.

Onboard, Centerfold sports a giant 16,800 GT interior. The studio hasn’t given many details regarding the layout, but told Robb Report more information will come in February. From the renders, however, it is clear that the vessel is also geared towards outdoor entertaining. The main deck sports a number of alfresco dining spots and outdoor bars, along with a sizable infinity pool to the aft that is flanked by sun pads. Elsewhere, the sprawling foredeck is equipped with a helipad to facilitate comings and goings via air, while the beach club to the stern sports a swim platform for refreshing ocean dips.

As for the décor, it appears the designers have opted for a subtle color palette and minimalist, contemporary furnishings that are complemented by clever, integrated lighting. Of course, any prospective buy will likely want to customize the sprawling interior to their taste.

If the 663-footer comes to fruition, she’ll be one of the largest superyachts ever built. Centerfold, indeed.