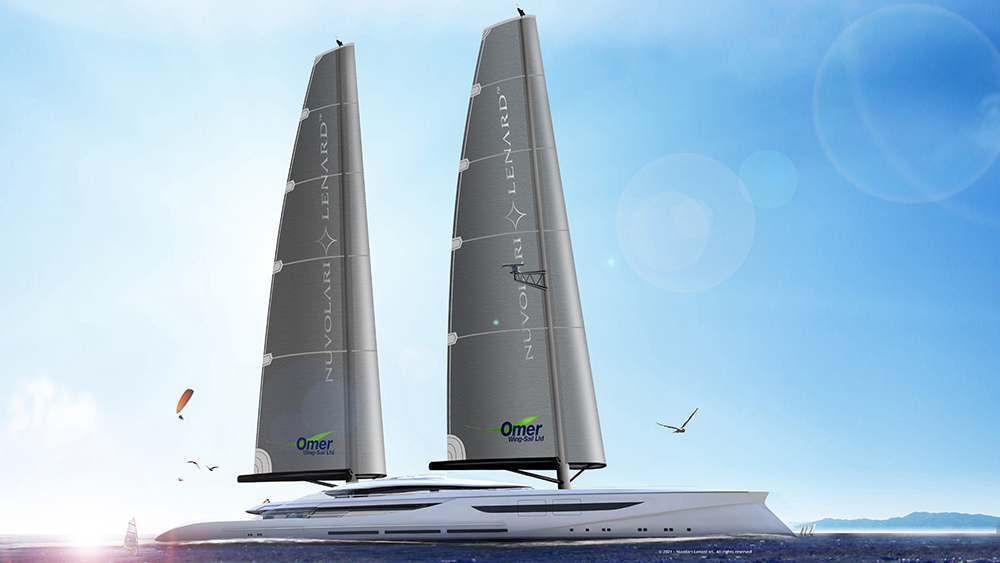 If a megayacht and a sailboat had a baby, it might be a radical new concept by Nuvolari Lenard. The epic 328-footer, which has been christened Vento, promises to combine the best parts of both vessels for efficient, eco-friendly cruising.

Nicknamed the “megasailer,” the concept was recently unveiled at the Venice Boat Show. The Venetian studio says the vessel is designed to have as little impact on the ecosystem as possible, and pairs modern luxury amenities with true sailing power.

“There’s nothing stopping us from thinking about a truly green large yacht,” engineer Carlo Nuvolari said in a statement. It’s not difficult to achieve major results, you just have to stop being a traditionalist and take a risk, going back to the basics: building a sailing yacht that really uses sails and is really efficient.”

Vento has an aggressive profile, reverse bow and a long waterline for greater stability and performance when sailing. The sleek aluminum hull helps to reduce drag, and the sloping stern has less impact on the displacement to further improve efficiency. The masts and superstructure, meanwhile, are crafted from advanced composite. In short, the vessel is long but relatively light, which makes it well-suited for fuel-efficient sailing.

The studio partnered with aerodynamics expert Ilan Gonen of Omer Wing-Sail to design the vessel’s sail plan. The unique wing sail, which looks more like an airplane wing than the billowy white sails typically associated with sailboats, reportedly offers far greater efficiency than a traditional rig. That’s because it requires less sail area and thus adds less weight for the same amount of power. (If you tuned in to this year’s America’s Cup, you would’ve seen the new technology in action.)

The retractable keel will make it possible to go from a draught of 18 feet to 30 feet while the carbon masts will measure 210 feet and support a total sail area just shy of 23,000 square feet to truly make the most of gusts at sea. In fact, Vento is literally Italian for “wind” and tributes the vessel’s main source of clean, green power.

Nuvolari Lenard says it’s also in talks with a manufacturer to equip Vento with a hybrid/electric propulsion system with variable-speed generators and variable-pitch propellers. According to the studio, this means seafarers will be able to sail as much as possible while polluting as little.

Onboard, Vento sports offers “spacious and very well distributed interiors.” The vessel comprises six double cabins for guests, including four VIPs and one “super VIP,” plus one expansive master suite located forward of the main deck that comes with its own private terrace. Elsewhere, the studio says the outdoor spaces are “huge and varied,” with a flybridge, spa, beach club and other extras that make Vento more akin to a megayacht than any sailboat you might’ve seen in the America’s Cup.

The studio’s founders, Carlo Nuvolari and Dan Lenard, want to work to protect the environment with their designs. Just last year, the studio unveiled a 14-seat hybrid water taxi, Thunder, built to preserve the historic city of Venice and its canals through the use of green technology. We can’t wait to see what the duo come up with next.