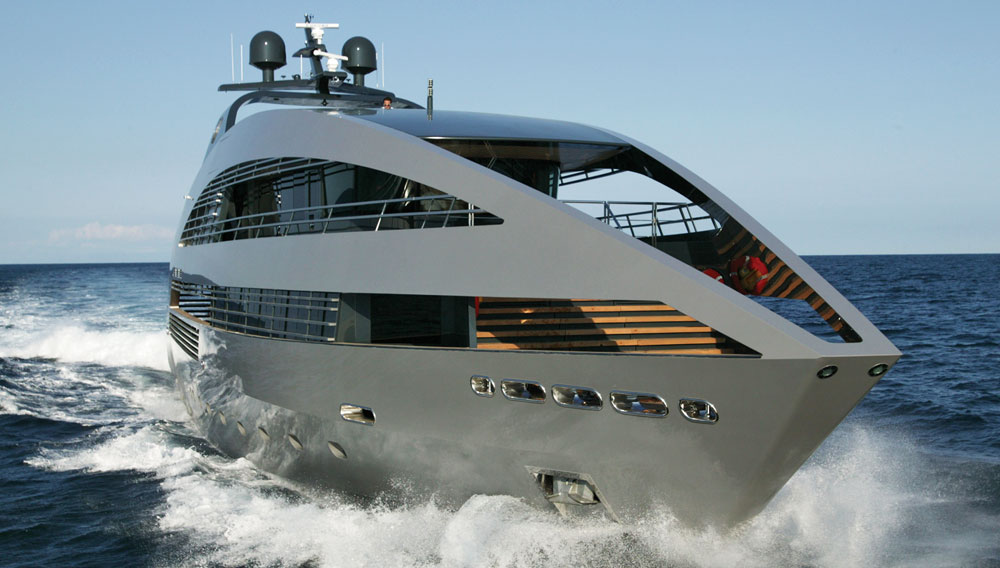 Lord Norman Foster, the creative force behind Manhattan’s Hearst Tower, London’s City Hall, and a host of other highly acclaimed projects, is making a big splash with his most recent foray into yacht design. Foster’s visually arresting Ocean Emerald—the first of four identical megayachts being built at Italy’s Rodriquez Cantieri Navali shipyard—was delivered in 2008. “Because we are detached from the world of yachting and not bound by its perceived conventions, we were able to create something very unique,” says David Nelson, senior partner and head of design at Foster + Partners in London. Unique indeed. Foster and his team created an arched, almost oblong hull shape that resembles a sharpened spear. Ocean Emerald’s 2,500-square-foot exterior features an array of terraces connected to staterooms, as well as layered decks at the back of the boat and a spacious sundeck on the upper level. Throughout the yacht’s interior, the architects maximized the amount of natural light by incorporating extensive floor-to-ceiling windows and walls of light-colored hardwoods with high-gloss finishes. The design is most successful in the airy master suite, a full-beam residence with two private terraces. John Hare, chairman of fractional-ownership provider YachtPlus, describes the 134-foot Ocean Emerald as a 6,000-square-foot contemporary home with an unparalleled ocean view. “The owners will have the benefits of life at sea, but with an interior that would not be out of place in a beautiful home,” he says. “They will also be living out this dream lifestyle at a fraction of the cost.” The fractional-ownership model has not caught on in the yachting industry in the same way it has in private aviation; yet for Mike Balfour, who owns a fractional share in Ocean Emerald, the economics of this model make sense. “I already have a 20-meter motor yacht,” says Balfour, who is the founder and chairman of Fitness First, one of the world’s largest health-club chains. “But for the same price, I was able to buy a share of a Norman Foster yacht. I use my boat only four or five weeks each year, so the idea of a share really appealed to me.” Balfour plans to sail the Caribbean on Ocean Emerald later this year. He also visited the yacht when it launched from the Rodriquez Cantieri Navali shipyard in April. “She’s beautiful and sails extremely well,” he says. “It’s what you’d expect from Norman Foster—who, I am told, spent an inordinate amount of time visiting the yacht during the build process.” Of course, Foster had an ulterior motive for making sure Ocean Emerald was highly polished when it made its world debut: He also owns a share in the yacht.