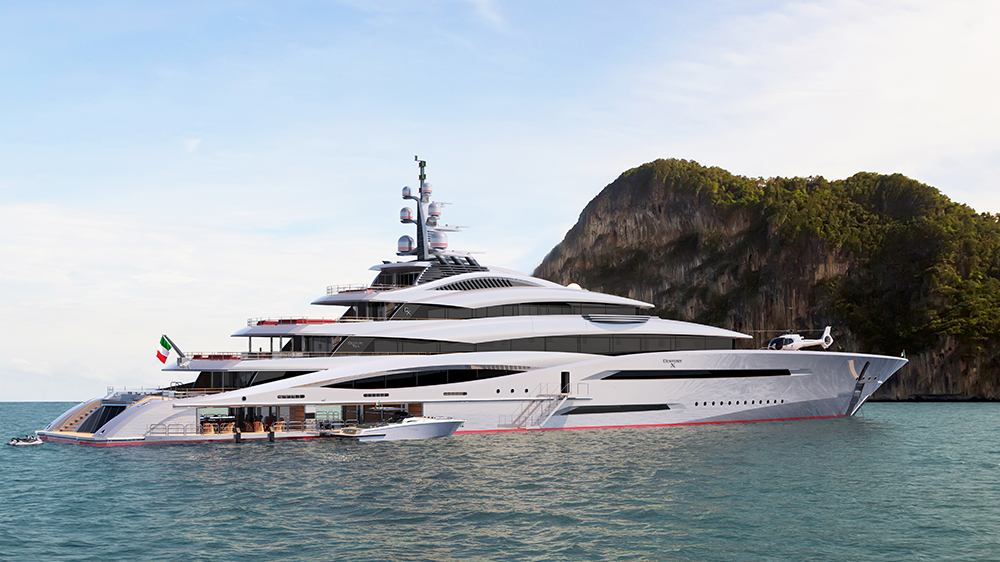 Ocean Independence has pulled no punches with its latest megayacht concept. The epic 360-footer has an amenities list that reads like that of a luxurious five-star resort and features pretty much everything but the kitchen sink.

Project Century X, which was penned in partnership with exterior designer Christopher Seymour and design consultant Carl Esch, features sleek lines and a classic silhouette to please purists. But it’s the interior that truly sets this vessel apart.

Century X offers a staggering 32,292 square feet of living space that was brought to life by renowned Berlin-based designer Theodoros Fotiadis and his team. It offers a total of seven staterooms for 14 guests and is anchored by a sprawling 15,069-square-foot owner’s deck that comes complete with a private master suite, saloon, bar and dining area.

Elsewhere, there’s a state-of-the-art gym with a sauna and massage center, a cinema lounge with an adjoining bar, a generous main salon, and an elevator to help you easily access all four decks. There is also additional accommodation for 27 crew.

Meanwhile, the vessel offers countless relaxation areas outside. There are no less than four freshwater pools, along with a jacuzzi, helipad, swim platform and an oversized beach club featuring idyllic waterfalls.

Thanks to the large tender garage that sits aft, Century X is jampacked with water toys, too. Guests can make use of two tenders, two RIBs, four jet skis, scuba diving equipment, a Waverunner, and other fun gear.

Century X will likely be fitted with a pair of 3,600kW engines that deliver a top speed of 19 knots, a cruising speed of 16 knots and a range of 6,000 nautical miles. She has an estimated build time of 48 months and is expected to be delivered in 2024. Price is available upon request, though be prepared to fork out for this stunner.

Check out more renderings of Century X below: