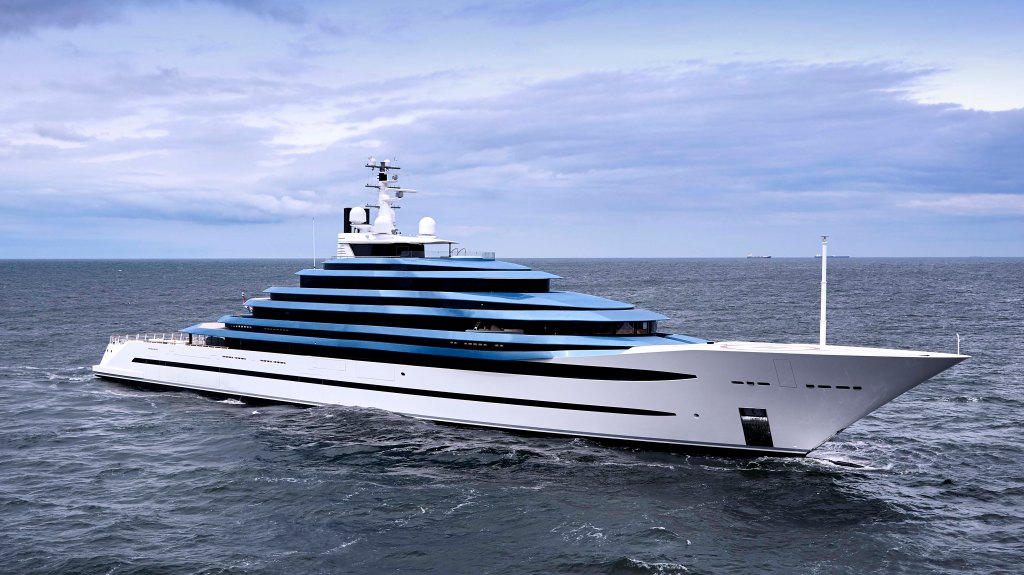 Dutch shipyard Oceanco has been building world-class yachts since 1990. With large-yacht facilities in Alblasserdam, near Rotterdam in the Netherlands, and expansive outfit facilities in Marineweg, it made the decision in 2005 to focus its efforts on creating custom yachts of 80-plus meters (262 feet) in length. The result has been a raft of high-profile deliveries, culminating in the recent 361-foot Project Jubilee—launched in February 2017 and delivered to its owners in July—the largest yacht ever built in the Netherlands.

A stalwart of the shipbuilding industry, Oceanco is no stranger to expansions and new builds. Its established facilities in Alblasserdam include a private harbor with 427 feet of quayside where a new state-of-the-art dry dock was recently designed and purpose-built to handle yachts of up to 459 feet in length. But in 2010, when its current owner Dr. Mohammed Al Barwani acquired the Dutch yard and brought it under the umbrella of MB Holdings, a new era of determination commenced.

Barwani is a businessman familiar with success; on founding MB Holdings in 1982, his business interests progressed steadily, first through the energy and oil industries, then real estate, and now within the superyacht industry, albeit accidentally. “I asked my banker if he knew of a yacht for sale. He told me he didn’t, but he did know of a shipyard for sale. I invested in it and went to work expanding it. I’ve been happy ever since,” he says, speaking of his Oceanco acquisition.

However, Barwani’s connection to the maritime industry and boat building (he added Turkish shipyard Turquoise Yachts to his portfolio in 2015) extends beyond the business realm. Growing up in Oman, a country famous for the capital port of Muscat as well as world-class fishing and diving, he has lived by the ocean all his life, and attempted to build his first boat when just a young boy. “I think I was around seven years old, and all of my friends helped me,” he says, reminiscing. “We put it in the water and as soon as we did, it sank!”

A keen fisherman, he owns a selection of modest boats himself, the largest being 105-foot Sharifa, a one-off Hatteras with a fishing cockpit in the back, but to date he has focused his major innovations on impressive facilities and client yachts.

Project Jubilee, with striking exterior styling by Lobanov Design and owner’s representation by Burgess, is the largest yacht ever built in the Netherlands. At an impressive 361 feet in length, with a generous 54-foot beam, steel hull, and aluminium superstructure, the yacht has a sleek and elongated profile that flows elegantly and gracefully from bow to stern. With no fewer than six decks, Jubilee’s progressively longer horizontal lines are what make the yacht highly distinctive in the water; when viewed from above, its curvaceous lines lead aft to a large pool deck with built-in aquarium and a substantial beach club below.

The yacht’s elegant Sam Sorgiovanni–designed interior is both spacious and comfortable, offering accommodation for up to 30 guests in 15 staterooms including an entirely private owner’s deck. Representing a first in yachting not only for its size, Jubilee is also a fully turnkey project, completely outfitted at delivery, including all owner’s supplies, such as tenders, spares, watersports equipment, china, crystal, silverware, table linen, sheets, loose furniture, and cushions.

Innovation is key at Oceanco. In November 2016, 335-foot Project Spectrum, conceived by Nauta Design and Oceanco to encompass a broad range of possibilities, was launched, featuring a refined hull shape and hybrid propulsion system. Currently under construction at the Dutch yard is 348-foot sailing yacht Solar, whose owner is reported to be trying out new technologies never before used in yachts. “It’s good to have innovative owners that want to drive the industry forward,” comments Barwani.

And speaking of driving forward, what of Barwani’s future endeavors? Is he in the superyacht industry for the long term? “Oman is a great place to have a large superyacht marina, so I’m trying to work with the government for that,” he says. “But I enjoy working with the shipyards. Oceanco has been—and is—a lot of fun. I’ve enjoyed it tremendously. I’ve enjoyed the designers, our industry colleagues, and I’ve enjoyed the brokers. I’ve met a lot of interesting people that I might not have met in other businesses. My business model has never been to buy and sell companies. We’re not a private equity business who buys a company, builds it up, and then sells it. In a word, I have no thoughts of exiting this vibrant industry.”