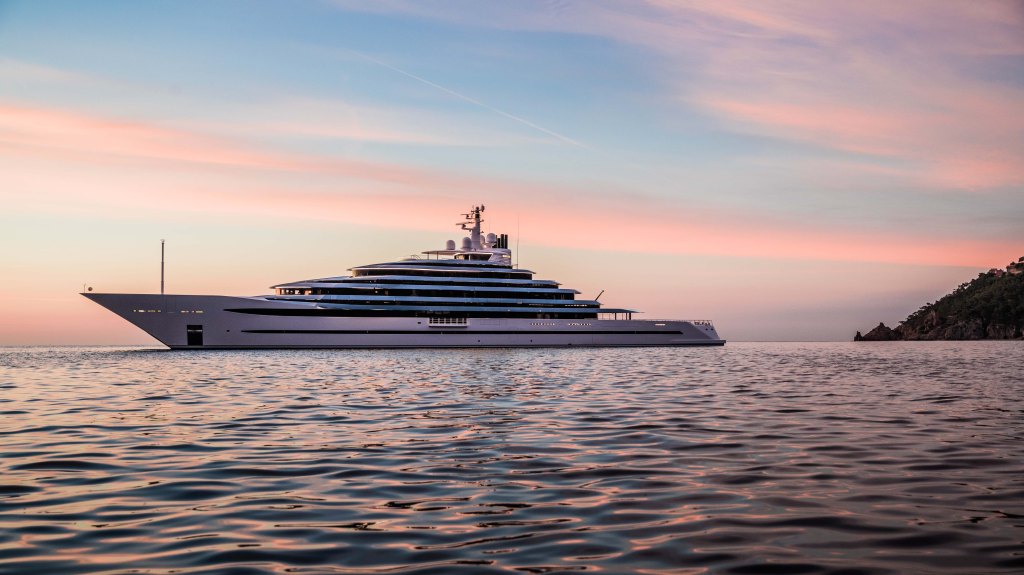 Oceanco’s 361-foot Jubilee, launched last summer, is the largest yacht ever built in the Netherlands. The yacht has 16 staterooms for 31 guests with a crew of 39. The yacht’s beam is 54 feet wide and it weighs 4,500 tons. Turning a behemoth like Jubilee into a delicate beauty was a task that fell on the shoulders of Igor Lobanov, whose recent designs included the 282-foot Oceanco St. Princess Olga (now Amore Vera) that launched in 2013. “When Jubilee’s owner saw Amore Vera, he liked it but said it was too small,” says Lobanov. “He then picked a concept from my portfolio. The final yacht looks very much like the initial concept.”

Designing Jubilee’s exterior was a challenge not only because of the nearly four-football-field length of the hull, but also the yacht’s height. “I developed the exterior so it had a ‘funnel’ shape that would mask its tall height,” says Lobanov. “The funnel collects the layers and visually nails them down to the hull.”

In order to maintain symmetry in the profile, Lobanov actually added a faux deck to the others encircling the yacht’s mid-section. “That fake deck sits between two other decks but is transparent from the interior,” he says. “I wanted these thin decks to give the sense of a 460-foot yacht sitting on the 360-foot hull. We wanted to confuse people seeing the boat from the distance and force them to guess how large it actually was.”

Beyond Jubilee’s sense of symmetry, the decks extend farther forward and aft as they descend, giving the yacht multiple views that change dramatically depending on where a person is standing. “Each level does its own dance, so the views are quite different on each deck,” says Lobanov.

The superstructure wasn’t the only challenge. Given the yacht’s length and beam, the designer had an abundance of square footage to shape into areas that were simple and even delicate. Jubilee has a dedicated helicopter deck that comprises most of the foredeck. The rear section is, in turn, dominated by a long pool deck with the same unassuming elegance of the upper decks. The deck just above provides a partial overhang above the pool and a shaded space that serves as the main exterior social area of the yacht.

Jubilee’s owner is Middle Eastern, so Lobanov studied Arabic architecture for cues that he could use in the design. Favoring simplicity over opulence, he used Arabic motifs like the waterfall that separates the dining area from the swimming pool for both aesthetics and functionality. The oval dining table also has Arabic influences, as do the shapes of the lounges around the pool. “We tended to avoid a traditional Arabic style and went for a more subtle, modern look,” he says. “We wanted the features to be soft, without huge contrasts, but at the same time have beautiful details.”

Lobanov is particularly proud of the way the circular ceiling over the dining table turned out. The nearly 1,000-square-foot design is a single piece of metal with dozens of LED spotlight fixtures. Nearly all the exterior lights are comprised of LED strips with no ceiling panels. “When you come on board, you only see smooth surfaces,” he says. “They don’t have the rough, chaotic grooves you often see on paneling. The edges of the ceiling over the dining table curve downward like a dome, so there is a flow to everything.” The ingrained patterns are beautiful but subtle.

The beach club below includes a Turkish spa and indoor seating area that looks out over the water. It’s larger than most superyachts, but feels small compared to the pool deck just above.

In the end, Lobanov’s exterior is a perfect fit for Jubilee’s expansive hull. The yacht, both inside and out, is large but the spaces have been divided into human-size sections that convey openness and light. “I wanted the yacht to look simple from the distance, but as you get closer, you can see that it’s actually quite complicated,” says Lobanov.

Jubilee is currently listed for sale through Burgess Yachts.