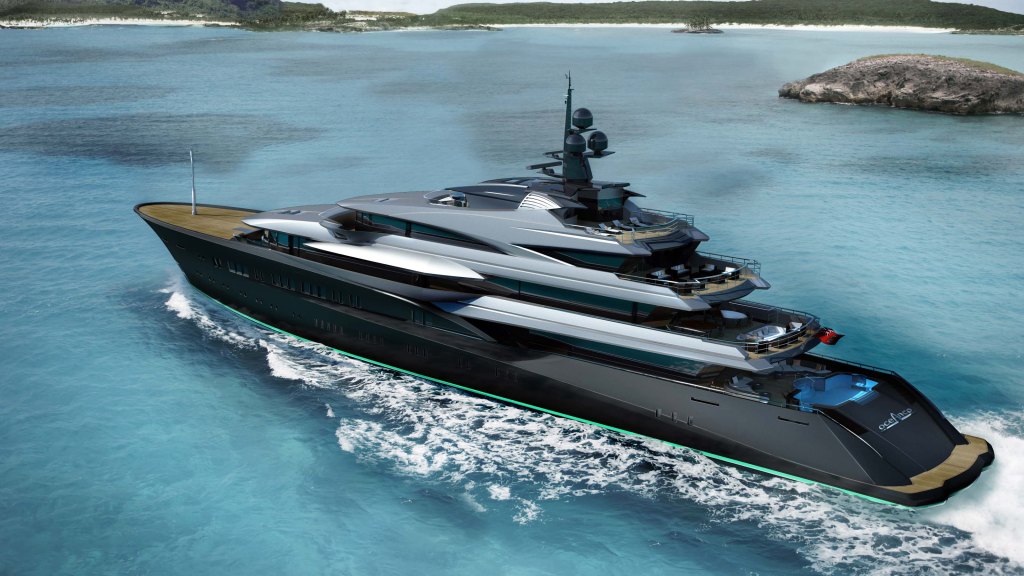 Oceanco’s Lumen superyacht concept gained even more luster at the Fort Lauderdale International Boat Show when a diamond-coated version was announced. The orange model of the long, lithe 302-foot gigayacht literally sparkled with its Sun King Diamond Coating. Diamond specialist Jean Boulle Luxury worked closely with paint specialist AkzoNobel to create the diamond coating using ethically sourced natural diamonds. The partners have used Sun King diamonds on a Rolls-Royce Ghost Elegance and Bentley Azure as well as a Bombardier Global Express jet. The coating made its debut at the Monaco Yacht Show on a Keizer 42, which was a fashion statement in itself. On Lumen, it would certainly add an extra level of luminescence to an already stunning yacht, with its stairway, multideck profile, large swimming pool, and helipad.

The Lumen concept was developed by California designer Adriel Rollins for Oceanco as a Passenger Yacht Code (PYC) vessel with accommodations for up to 36 guests. As the name suggests, the defining feature is light. Beyond the sweeping exterior, Rollins filled the interior with one-of-a-kind features like an atrium with a tubular glass and a stainless-steel elevator that extends five decks through the yacht’s center, all the way to the sundeck. The elevator will be surrounded by a floating spiral staircase, and at night, its soft lights take over, turning the area into an LED star-scape.

On moonlit nights, there will be a similar effect on Lumen’s diamond exterior, with a thousand points of light reflecting off the hull from the water and bright sky. When it is eventually built, Lumen promises to have one of the most dramatic exteriors on the water.