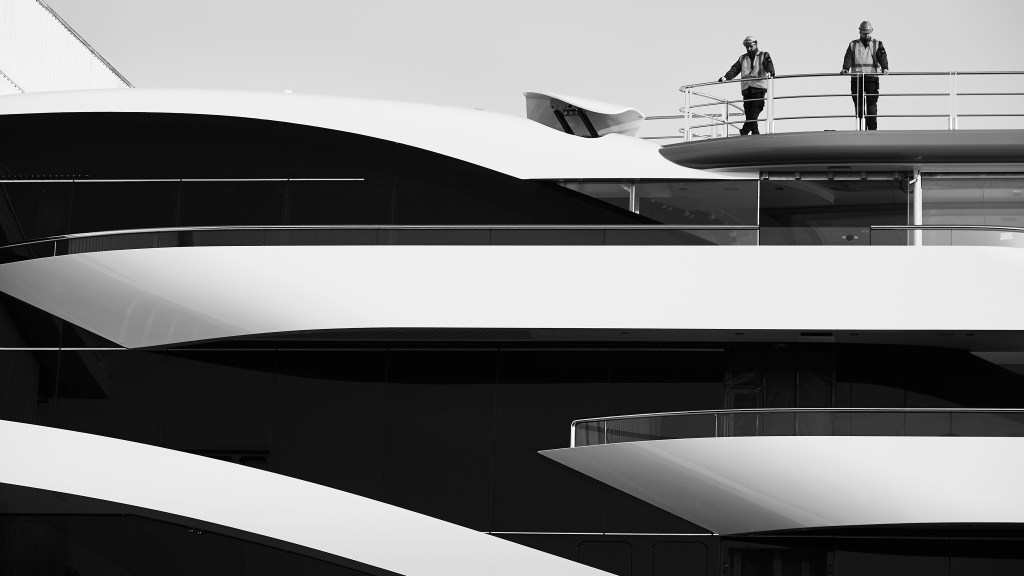 The code name “Project Shark” for the 295-foot Oceanco launched last week was not just a clever moniker from the Dutch yard’s marketing team. Designer Luiz De Basto actually conceived of the exterior as a huge, curved, and very elegant shark that would give the superyacht its inimitable look. “Most of my ideas come from nature,” says the Miami-based designer. “When you look at the profile, the shape is really inspired by a shark. You have the wing stations combined with the pilothouse that looks like a hammerhead and the mast is shaped like a fin.”

Of course, as De Basto adds, starting with a shark means nothing if you don’t arrive with a world-class yacht. Oceanco, responsible for some of the most stunning custom yachts on the water, will set new design standards with Project Shark if the initial photos are anything to go by. De Basto knows all the rules of yacht design, but purposely broke several with this yacht. First, he divided the yacht into zones for the privacy of the owners and guests. There are no exterior walkways above the main deck so the owners won’t have anyone looking in the windows of their private areas. De Basto also defined Project Shark with huge stretches of glass for uninterrupted oceanscapes.  “The floor-to-ceiling windows give exceptional views, but you also get the boat’s unique sense of solitude through the private balconies and terraces,” says De Basto. “It’s that combination that makes this yacht so different.”

Despite its length, Project Shark has only 12 staterooms, and the owners have the entire upper deck of the Nuvolari-Lenard–designed interior at their disposal. The owner’s deck has a palatial en-suite apartment, side terraces, and a rear patio with a roof, hot tub, and an alfresco dining area. It also has several service areas and a crew elevator so the crew can prepare meals or set up the entertainment centers without disturbing the owners.

The design also includes an innovative, enclosed stairway on the aft helipad that can be shut while the helicopter is landing or taking off, so that owners and guests don’t have to deal with the helicopter’s exhaust fumes or downflow from its blades. “Enclosing the stairways also preserves the flow of the superstructure,” says De Basto. “It provides an aesthetic and practical solution for the helipad.”

The designer could not have been happier with his experience at Oceanco, which left almost all of the visionary design in tact through what was a complicated build of the steel yacht. Powered by a pair of 4,828 hp MTU diesel engines, Project Shark will now undergo sea trials and should be delivered before the summer when it will enter into the list of the world’s top 200 yachts.

De Basto is happy with Project Shark, his largest project to date, with both the build quality and sense of proportions across the exterior. “The scale of the yacht was not intimidating,” he says. “Once I came up with the elegant design, the yacht’s size didn’t matter. It doesn’t look heavy and awkward like some superyachts that big, but long and lean.” Just like a shark.