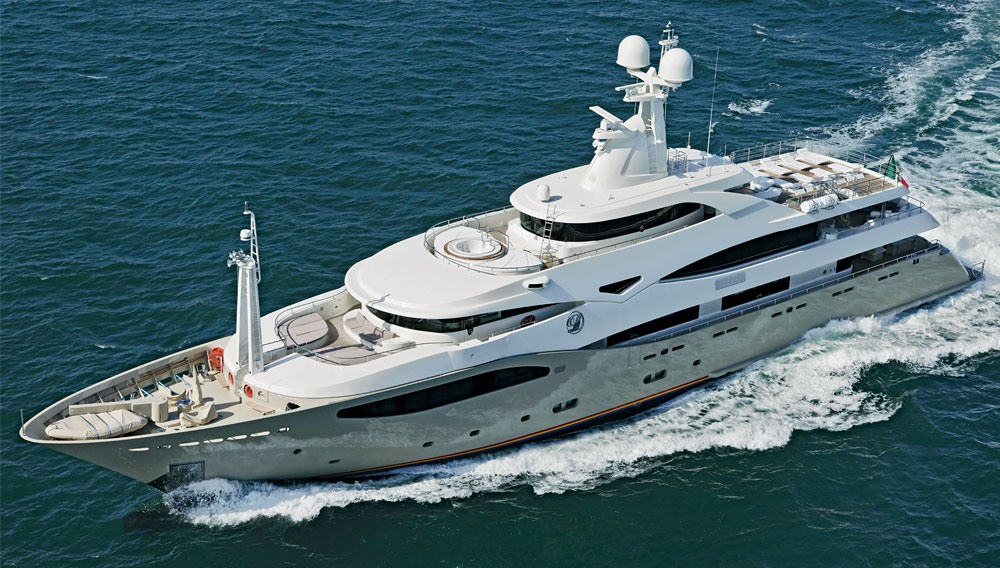 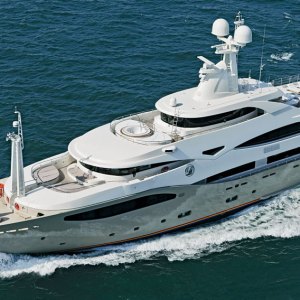 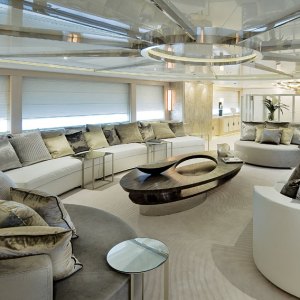 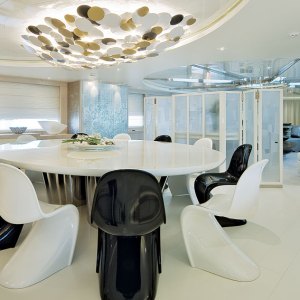 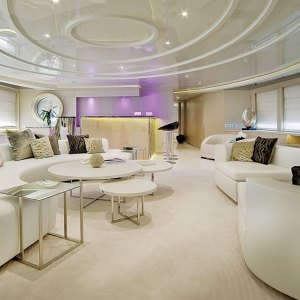 Though Darlings Danama is the 130th vessel to launch from CRN’s shipyard in Ancona, Italy, and the sixth yacht in the builder’s 197-foot series, this sleek new charter vessel is unquestionably one-of-a-kind. The nearly 50-year-old shipyard, which joined the Ferretti Group in 1999, worked with the designers at Studio Zuccon International Project (a longtime Ferretti partner) to sculpt the aluminum superstructure of the steel-hulled displacement yacht. Its two-toned exterior and emblazoned logo ensure that Darlings Danama stands out in ports from the Mediterranean to the Caribbean, where the yacht is now available for charter in the summer and winter seasons, respectively. Stylish, sophisticated, and amenity-rich interiors and deck spaces further distinguish Darlings Danama—and make for one of the most inimitable, comfortable, and memorable experiences on the high seas.

Main Event | Darlings Danama’s European owner employed the Parisian husband-and-wife team of Cristina and Alexandre Negoescu to design the yacht’s interiors and deck spaces. The pair, who also created the interiors for the owner’s primary residence, worked closely with CRN’s design department, Centro Stile, on the project, which emphasizes open spaces throughout. Underscoring this philosophy, the Negoescus custom designed virtually every piece of furniture for the yacht, ensuring the utmost efficiency of space.

On Darlings Danama’s main deck, a sprawling hall runs roughly 60 feet from the dining room (background), through the main salon (foreground), to the bar area (not shown). The Negoescus designed the salon’s two facing white-leather sofas and the round silver-velvet armchairs, all of which were manufactured by French artisan Phelippeau Tapissier. The couple also designed the chrome-steel beams, set in the pattern of the sun, that support the ceiling panels.

The main hall’s bar area, which leads to the aft deck, features a semicircular bar with a Portoro marble surface, mosaic detailing, and straw-marquetry pieces that were laid by hand one at a time. White stingray leather covers all of the cabinetry in the bar.

Tending bar aboard Darlings Danama are two crew members trained in mixology. Among the countless cocktails they concoct for passengers is the DD Dynamite, the yacht’s signature (and secret-recipe) drink.

Ship Shape | Forward of the main salon, a decorative opaque-glass screen distinguishes the dining room (top) from the open social area. Above the room’s oval 12-seat dining table hangs an Art Deco–influenced custom light fixture made with colored circles. Adding to the Art Deco ambience—and to the room’s curves—are the rounded black and white dining chairs. Double doors made from white oak and covered in stingray leather lead from the dining area to the staircase foyer.

The Silent Treatment | Darlings Danama’s owner demanded that the master suite provide total peace and quiet. To meet this requirement, CRN worked with the technology company Videoworks and the Marche Polytechnic University, both in Italy, to develop a maritime noise-canceling system.

The full-beam master suite is indeed a haven of tranquility. Located forward on the main deck, the massive suite is accessible via a foyer and sitting room, where a door covered in stingray leather and silver leaf leads to the sleeping quarters. A large private balcony folds down from the starboard side of the suite with the touch of a button. The room also includes a wardrobe and an office space.

A mosaic-tile wall separates the sleeping area from the master bath, where two decorative glass doors lead to separate his and her toilets. A large tub lined with mother-of-pearl abuts the wall on the bathroom side. On the bedroom side, the designers installed an 80-inch plasma TV that faces the king-size bed. The master suite and five guest cabins (which accommodate a total of 12 passengers) offer access to satellite TV and an on-demand Kaleidescape library of music and movies.

Decked Out | Spacious and dynamic exterior areas make Darlings Danama an ideal venue for parties. The yacht has hosted several costume and themed parties on its various charter trips, including at least one disco night while anchored in Saint-Tropez. Darlings Danama has also been the setting for a flamenco performance in Spain; an opera-themed night while moored in Venice, Italy; a steel-drum show in the Caribbean; and a hog roast off the coast of Cannes, France.

The sundeck, which spans more than 2,000 square feet, features a bar with Club House Italia stools. The hard edges of the deck furniture, from the Spanish design firm Vondom, contrast with the rounded furnishings found in the yacht’s interior. Forward on the sundeck, a 460-gallon hot tub holds as many as eight people. The alfresco dining area of choice is located directly below the aft sundeck on the main deck, which guests access from a set of portside stairs.

Darlings Danama also includes a full gym. For outdoor pursuits, the yacht houses a pair of 24-foot Castoldi jet tenders, Sea-Doo personal watercraft and underwater propulsion devices, various towables, snorkeling gear, and a water trampoline, among other toys and tenders. The stern door to the tender garage folds down to become a sizable beach deck, offering convenient access to the sea.