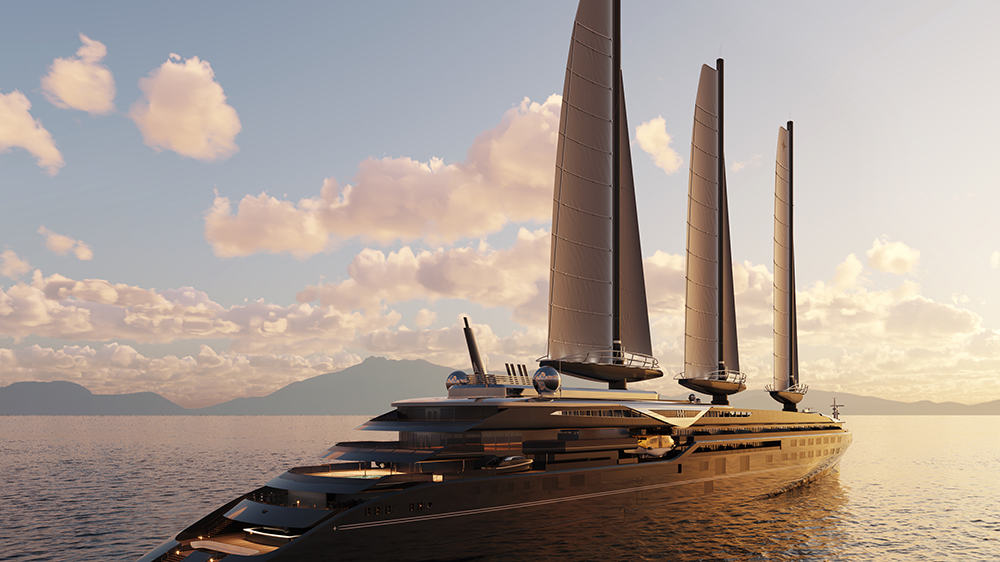 After 140 years on land, the Orient Express is hitting the high seas.

Accor has just announced a new Orient Express cruise liner will debut in spring 2026. The extravagant 722-footer, known as Silenseas, will become the world’s largest sailing yacht upon launch. She will be able to accommodate up to 120 passengers on voyages throughout the Mediterranean and Caribbean.

The French hospitality group partnered with Chantiers de l’Atlantique for the new endeavor. The noted French builder developed the first Silenseas model in 2018, but has further refined the design for Accor. Fellow Gallic firm Stirling Design International is responsible for the ship’s sleek exterior architecture.

Onboard, meanwhile, Maxime D’Angeac will spearhead the layout and decor. (Accor has also entrusted the renowned French architect with redesigning the new Orient Express train that is rolling out in 2025.) Inspired by the golden age of the French Riviera, the glitzy interior will feature 54 spacious suites of roughly 750 square feet. The preeminent Presidential Suite spans more than 15,000 square feet and comes with an epic 5,700-square-foot private terrace.

Naturally, you can expect the same high-end amenities that appear in Accor’s Orient Express hotels. The ship is equipped with two swimming pools, two restaurants and a speakeasy bar. In addition, there’s an amphitheater and a recording studio for your entertainment, as well as a top-notch spa for treatments, meditation sessions and more.

Accor’s newcomer is not just big and beautiful, she’s environmentally friendly, too. The vessel will be equipped with a patented SolidSail system comprising three tilting masts measuring more than 300 feet each and three rigid sails with a surface area of nearly 5,000 square feet. The sails can provide up to 100 percent of propulsion in the right conditions, according to Accor. This, in turn, reduces carbon emissions and lowers operating costs. It also ensures the liner is practically silent on the seas, hence the moniker. If more grunt is required, the hybrid’s high-tech engines will kick in. They will run on liquefied natural gas (LNG) to curb the damage to the environment.

“With Orient Express Silenseas, we are opening a new chapter in our history: the experience and excellence of luxury travel transposed to the most beautiful seas in the world,” Accor’s chairman and CEO Sébastien Bazin said in a statement. “This exceptional sailboat, with roots anchored in the history of Orient Express, will offer unparalleled service and spaces with refined designs, reminiscent of the golden age of legendary cruises.”

Accor isn’t the only well-known hospitality brand dipping a toe into the marine industry, either. The Ritz Carlton, Belmond, Aman and Four Seasons have all recently launched floating hotels. Accor is hoping to establish a fully fledged cruise line, though, with a second vessel scheduled to launch in the first quarter of 2027. Reservations for Silenseas will open as early as 2024.