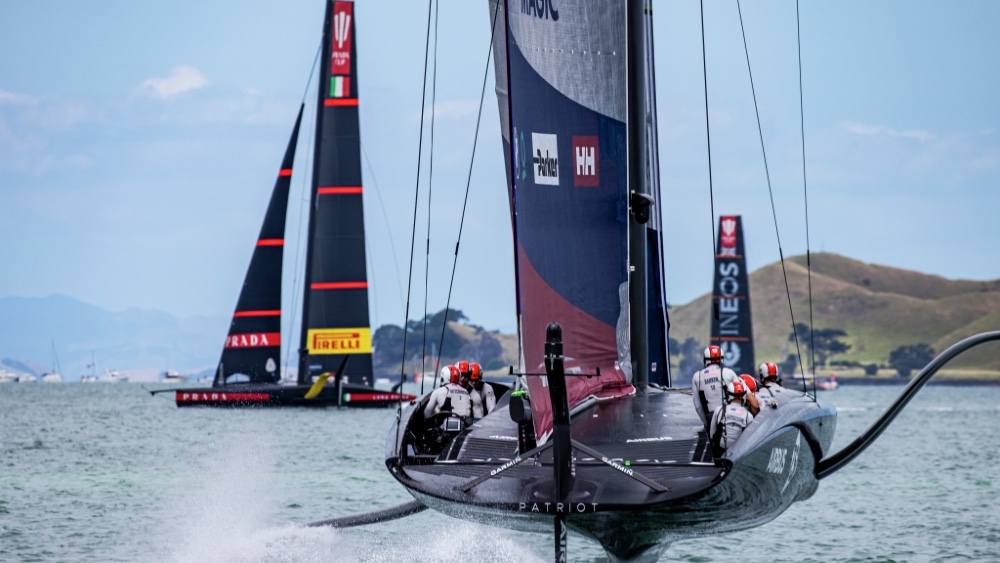 After more than three years of intense practice, a Coronavirus pandemic that cancelled racing events in three countries, building a state-of-the-art America’s Cup race boat Patriot in Rhode Island and flying it 9,000 miles to Auckland, New Zealand, followed by Patriot‘s devastating crash and frenzied repair, the New York Yacht Club’s American Magic syndicate was eliminated in the run-up to the America’s Cup. The only team representing the US was knocked out of the Prada Cup Semifinal by Luna Rossa of Italy.

The American team had high hopes of bringing the America’s Cup—at 170 years old, the oldest race in the history of sailing—back to the US after Team Emirates New Zealand won it in 2017 against another US team representing Golden Gate Yacht Club.

New York Yacht Club-backed teams had either won or challenged for the “Auld Mug,” as the Cup is nicknamed, 30 times during the 170 years, but this was the first time in the last 18 years that the New York Yacht Club had mounted a challenge. The team’s main backers, Hap Fauth, Doug DeVos and Roger Penske, spent many millions on the boat, team and event.

Patriot‘s near-sinking meant the team had to spend a precious 10 days of practice time repairing the boat for its next  series of races.  Courtesy American Magic

In an earlier pre-Cup series of races, Patriot did well by beating the Emirates Team New Zealand boat twice. American Magic finished that event second overall with a 4-2 record, and seemed primed for the Prada Cup.

“Somebody has to win, and somebody has to lose,” said Terry Hutchinson, American Magic’s executive director and skipper, in a post-Prada press conference. “We always felt that we were prepared, and that we’ve done things in the correct manner to be on the right side of things here in Auckland.” At the same time, Hutchinson added, “you feel the sting of defeat.”

Despite more than three years of practicing aboard a series of increasingly faster, foiling yachts, the team experienced this month a near-fatal ending to its Cup efforts after Patriot launched off a wave during a race at speed. When it hit the water, its hull broke open and the boat nearly sank. Patriot’s damage was substantial, said the team, so serious it would normally take weeks or months to repair. Nearly every system onboard, including the critical foil-cant system, a large chunk of the composite hull, and many of the electronics, had to be replaced.

The boat was repaired in record time, but the US team could not find its way back to competing against the Italian syndicate.  Courtesy American Magic

During those critical 10 days, Luna Rossa worked hard on increasing its boat speed. The US syndicate said that it wasn’t able to match the “performance development” of the Italians since it was forced to stay in port for nearly two weeks. Last week, Patriot lost the best-of-seven semifinals in the Prada Cup in four straight races.

“It’s obviously disappointing,” said Hutchinson. “There’s not a person inside of our team that likes losing. You have 135 ‘Type-A’ personalities all pushing for the same thing, in the same boat, for the same result. I have nothing but pride for what we’ve done over the last three and a half years. All we can do is take it on the chin, understand our strengths and weaknesses, and move the whole game forward.”

With its primary goal of bringing the Cup back to the US now gone, American Magic said its secondary goal of making sailing “relevant” again to the US public was partially accomplished. American Magic did hundreds of presentations, tour stops and digital outreach programs to boost US awareness of the America’s Cup. It was the first America’s Cup team to use the traditional home of Newport, Rhode Island, as its primary training location in almost 25 years, and also restarted the tradition of building its race boats in Rhode Island. Hutchinson said the Cup campaign wouldn’t have been possible without the three main principals.

“When we started this program in 2017, I was getting cold feet and I communicated that to Doug and Hap,” said Hutchinson. “And Doug wrote me back: ‘I think we should go for it.’ All of these people, and the New York Yacht Club, represent what’s great about our country, [with] the passion that they bring to the sport and the passion that they bring to sailing. Roger was always quick to say he didn’t know a lot about sailing, but he knows a lot about winning. His influence on our team was always present.”

The Italians will now face Ineos Team UK in the Prada Cup Final. The winner of the Prada Cup will then face Emirates Team New Zealand in the 36th America’s Cup Match.