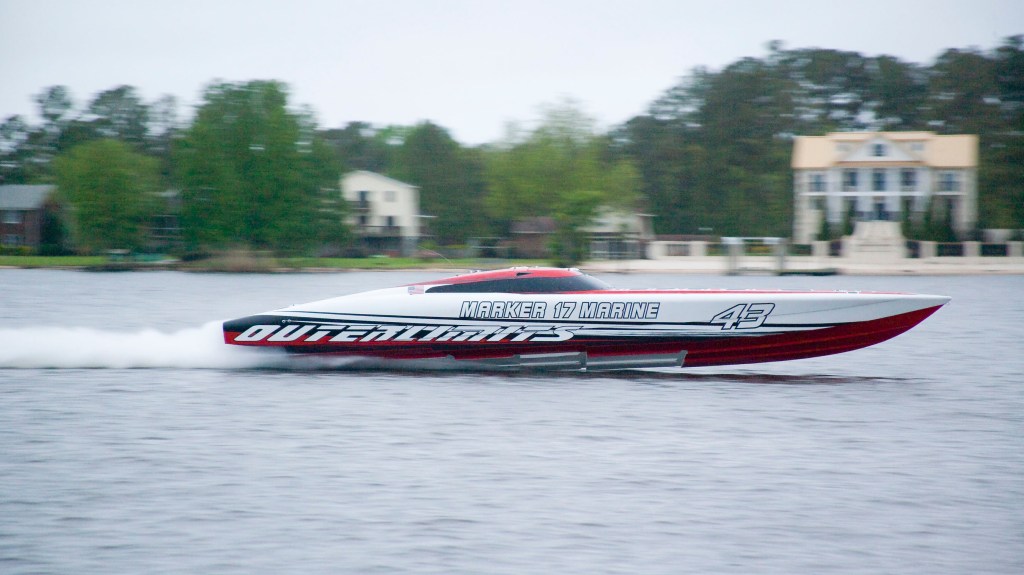 Seeing the Manhattan skyline pass in a blur at more than 100 mph is a thrill. In a boat roaring up the Hudson River at that speed, the thrill turns into ecstasy. I have cruised the island of Manhattan many times by boat, big and small, but zooming up the crowded waterway early this week in the Outerlimits’ red-and-white SV43 powerboat trumped them all.

This particular SV43, part of a Mercury Marine media event at Chelsea Piers, holds a V-bottom record of 180.47 mph. That was with twin 1,650 hp Mercury Racing engines. Those engines had been swapped out for smaller 1,350 hp Mercury Racing engines, but the SV43 still had speeds greater than 150 mph. At the dock, you can see that this Outerlimits is built for speed, with its custom paint job, and built of exotic, super-light materials like carbon fiber and a composite core. Outerlimits offers its 43-foot custom runners with cabins, but this one had only a cool-looking enclosed cockpit.

I’ve been in open-cockpit boats that have crossed the 100-mph mark, but the Outerlimits’ experience was completely different. In an open cockpit at those speeds, wind is the dominant factor. Voices get lost in the roar of the engines, and turning your head sideways will rip the sunglasses off your face. In the Outerlimits, the drive was much more civilized. There are five leather bucket seats in the cockpit, two in the front and three in back, with plenty of legroom. All have cutouts in the rear of the seat for air circulation, along with beefy harness seatbelts, providing a sense of comfort, but also safety. Unlike the open-cockpit boats, you can hear the person in the seat next to you, and unless you put your head through the sunroof, there’s no wind rattling your cheeks.

There is definitely a sense of speed. When Outerlimits’ Dan Kleitz was cruising up the Hudson at 50 mph, avoiding ferries and other commercial traffic, the boat felt like a typical cruiser running at a leisurely 20 mph. At 70 mph, the soft ride felt more like 40. But when Kleitz pushed the throttles down and the SV43 surged to 80, 90, and crossed 100 mph, the rush of speed and blast of adrenaline were unmistakable. It felt like hitting hyper-speed in Star Wars. There’s nothing like going that fast on the water, when a tiny wake or side wave supersizes the feeling of possible calamity. Your body understands that, like the ultimate amusement park ride, there’s nothing you can do but be there. But Kleitz was constantly jockeying the throttles and the SV43’s hull landed softly over any waves, so there was none of the fear factor that I’ve felt on other go-fast boats. Outerlimits had clearly designed the hull for those speeds. On our right, the Manhattan skyline blurred by, and we passed other boats like they were standing still. All too soon, we were up near the top of Manhattan. The ride was over in a few minutes, rather than the half hour it usually took to run up and down the Hudson.

Rhode Island–based Outerlimits Powerboats is considered the crème de la crème of high-performance yachts. The company customizes each boat to owner specifications, building only about 12 boats per year. Detailing is exceptional. The cockpit of our SV43, for instance, felt more like a jet interior than a boat. The black leather seats faced two touch-screen displays near the throttle. There was excellent legroom for three of us in the rear. Outerlimits had clearly thought out more than just how to make its boats fast. It was also luxurious and comfortable.