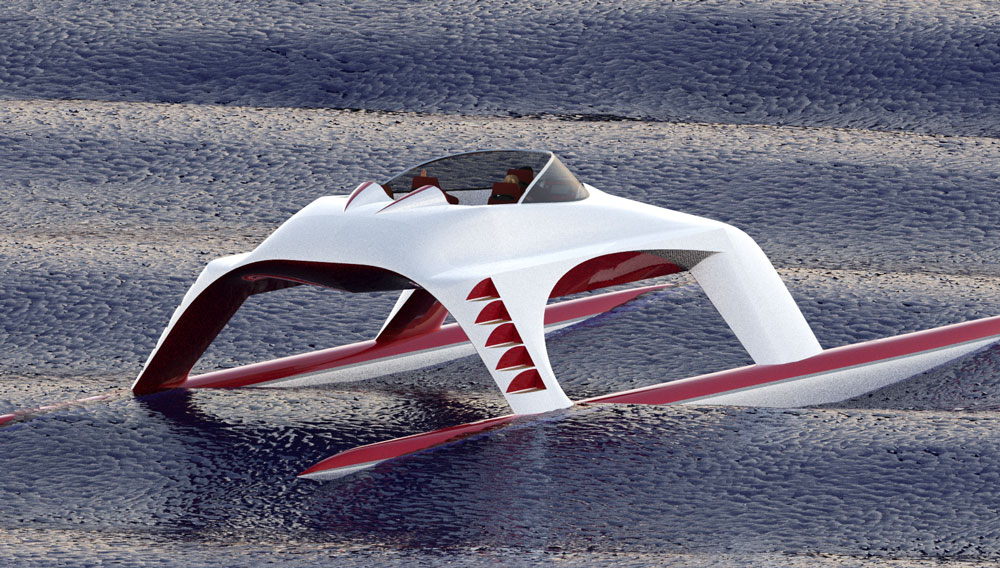 Looking like something out of a sci-fi movie, the new Glider Super Sports 18 (SS18) will become a reality this fall, when it is scheduled to make its public debut at the Monaco Yacht Show. The revolutionary design, created to glide over choppy seas and reach speeds approaching 60 knots, is currently under construction at Burgess Marine’s shipyard in Southampton, England.

Robert McCall, Glider’s chief designer and managing director, had his eureka moment while skippering a large catamaran through horrendous seas. While the monohulls around him were stuck in the rough stuff, the wave-piercing hull of the catamaran danced across the wave tops. “I realized that this catamaran’s strong seakeeping abilities could be taken much farther with hydrodynamic advances,” says McCall. “We decided to develop a new boat with a sharp, streamlined hull and high power-to-weight ratio, so it can achieve faster speeds with greatly reduced power requirements.”

To meet that goal, the SS18 will be powered by four 300 hp Rotax engines (the same engine used on Sea-Doo personal watercraft) that afford the yacht a 56-knot cruising speed. (The company says that the first example of the SS18 will be able to achieve speeds well in excess of the stated 56-knot cruise speed.) McCall expects the SS18—and the other Gliders on the drawing board—to deliver 50-percent faster speeds and 60-percent better fuel efficiency than other yachts in the same size range.

Aside from its performance, another important part of the concept is its soft ride. “The Glider’s unique hull form and proprietary stability control system actually tune to the sea conditions so the boat glides over the waves in unprecedented comfort,” says McCall. “Our boats have a considerable windage reduction compared to traditional motor yachts.” The Glider’s speed and agility in big seas also could cut long sea journeys by half or more, allowing owners to reach pristine cruising grounds like the French Riviera or the Caribbean in a much shorter time.

If this blade-runner performs as promised, the SS18 could be the first of many Gliders. The company has plans to manufacture four lines, including a racing version. McCall says that its SX-E and GT models, which range from about 98 feet to 230 feet, should deliver 50-percent faster speeds and 60-percent better fuel efficiency (as does the SS18) than other sport yachts and superyachts in the same classes. He also says that the propulsion system will be compact enough to allow more interior space for owners.

“Conventional yacht engines use a large portion of the rear interior,” says McCall. “We’ll have much more space for passenger comfort, without the drone of a large engine in the rear.” Glider will collaborate with owners on creating bespoke interiors, with a choice of layouts, materials, and individual design elements. The company says that pricing details are available upon application. (glideryachts.com)