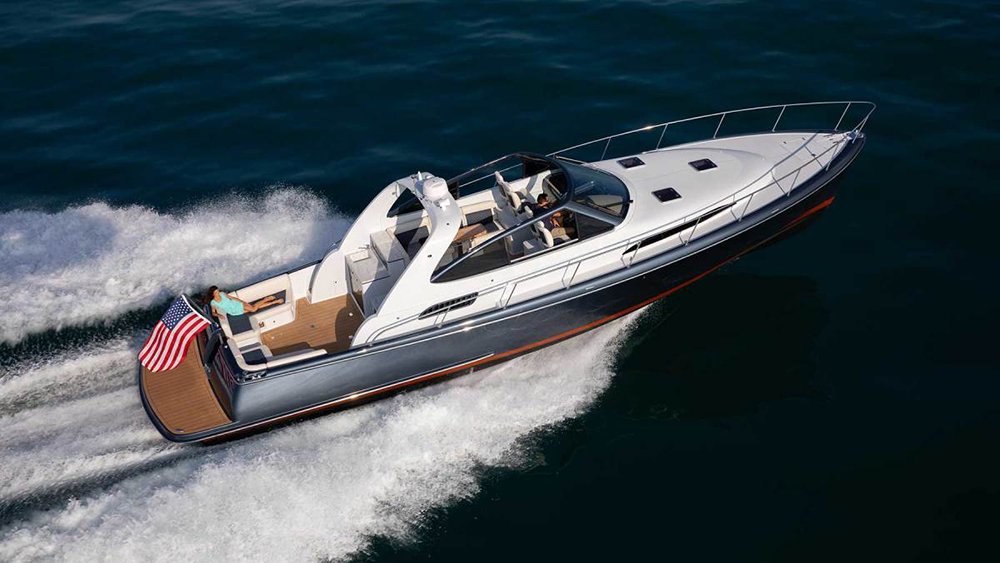 Defined by a 40-knot top speed and open main-deck arrangement, Australian shipbuilder Palm Beach’s GT50 Open paves the way for a raft of additional models in the GT series. Following a successful world debut at the Miami Yacht Show in February, the GT50 Open will makes its European debut at Cannes Yachting Festival 2019.

Drawing on the owner’s brief for a deep connection to the sea, the in-house design treats those on board to clear lines of sight throughout the yacht. This is most apparent in the command station to starboard. Helm and companion seats are paired with two additional forward-facing companion seats that are positioned to port at the same elevated height to provide uninterrupted views of the sea and surroundings.

Additionally, a carbon-fiber-framed windscreen wraps around the area, providing protection from the elements even when powering at top speed. And shelter from the midday heat is afforded by a removeable sun awning. For those who want to feel the wind in their hair, forward-facing seating on the helm-deck will provide that.

“The GT50 was conceived as a vessel that would allow Palm Beach Motor Yachts to really push the envelope in terms of our hallmark traits of performance and efficiency,” says Mark Richards, Palm Beach Motor Yachts founder and CEO. “She also brings to market a new aesthetic for the brand that is still elegant and timeless, while also showcasing simplicity in design where form and function complement each other, rather than one dictating the other.”

A cored e-glass hull with fully infused vinylester resin and carbon-fiber decks keep the yacht’s weight down, which equates to a sporty and smooth ride. Even when powering at full speed isn’t required, the performance-driven GT50 Open boasts a cruising speed of 35 knots. Furthermore, increased strength and rigidity is provided by the bulkheads and deck being structurally bonded to the hull, creating what Palm Beach refers to as a “semi-monocoque shell.”

Palm Beach is underway on developing additional models for the GT line, including a GT60 that will also debut in September 2019, projected to boast a top speed in the region of 50 knots. A GT70 is also in the design stages and will follow the introduction of the GT60.

“We want to maximize the owner’s time and fun on the water, by minimizing fussing around at the dock,” says Richards. “Behind the helm of the GT50, you can’t help but grin and enjoy yourself, it’s guaranteed.”