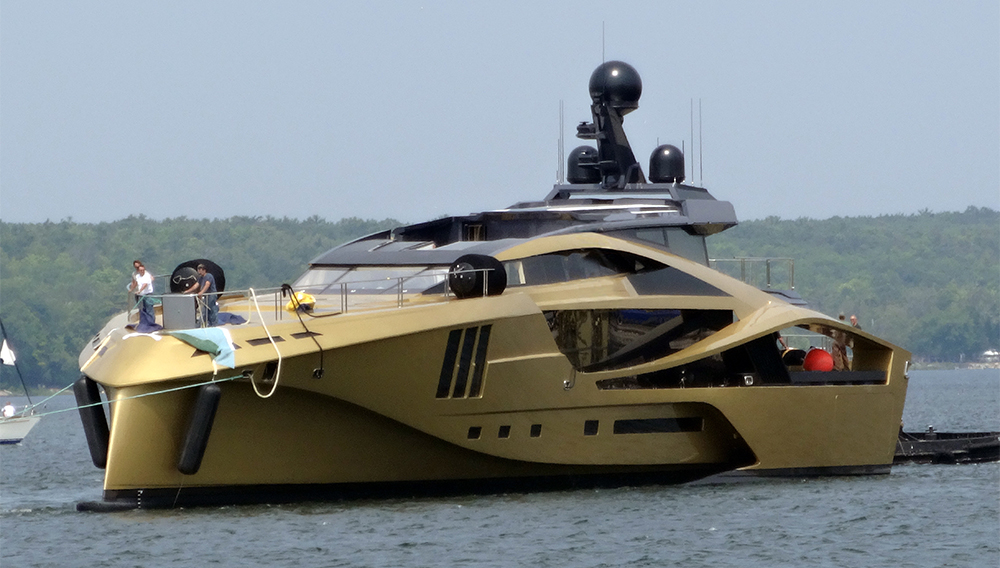 This summer has been a good one for the U.S. yacht builder Palmer Johnson, which recently launched the second boat in its PJ 170 Sportyacht line and the first example of its futuristic PJ 48 M Supersport series.

The more classically styled of the two new yachts, the PJ 170 features architecture with a gentle, uninterrupted curve that extends all the way from the ship’s stern to its forward superstructure, where it meets the aggressive, angular bow. In a signature design feature of the Sportyacht line, the aluminum hull is peppered with round portholes bisected by a strip of stainless steel. The ship’s large bow is equipped with a pool, while outdoor spaces for dining and lounging are found aft. Below deck, the PJ 170 is able to accommodate as many as 12 guests in five cabins.

Palmer Johnson’s other recent launch, the PJ 48 M, sports a bold, futuristic design that emphasizes curved surfaces—in fact, there is not a single completely flat surface on the entire exterior. The long, rectangular portholes adorning the yacht’s hull provide a pleasing visual contrast with its swooping lines. Thanks to a lightweight, all-carbon-fiber body and a wave-piercing bow, the PJ 48 M is impressively efficient, consuming roughly half the fuel necessary to power similarly sized yachts. The aft sides of the ship are affixed with small pontoons (called sponsons), much like side scoops on a sports car, that provide additional stability at anchor and underway. The boat’s full-beam main-deck owner’s suite features large skylights and a fold-down balcony, while four additional cabins below provide lodging for 10 guests.

Even after the launch of two significant new yachts this season, the team at Palmer Johnson is not slowing down: The company recently announced that it has already been commissioned to build the third example of the PJ 170 and the second PJ 48 M. (www.palmerjohnson.com)