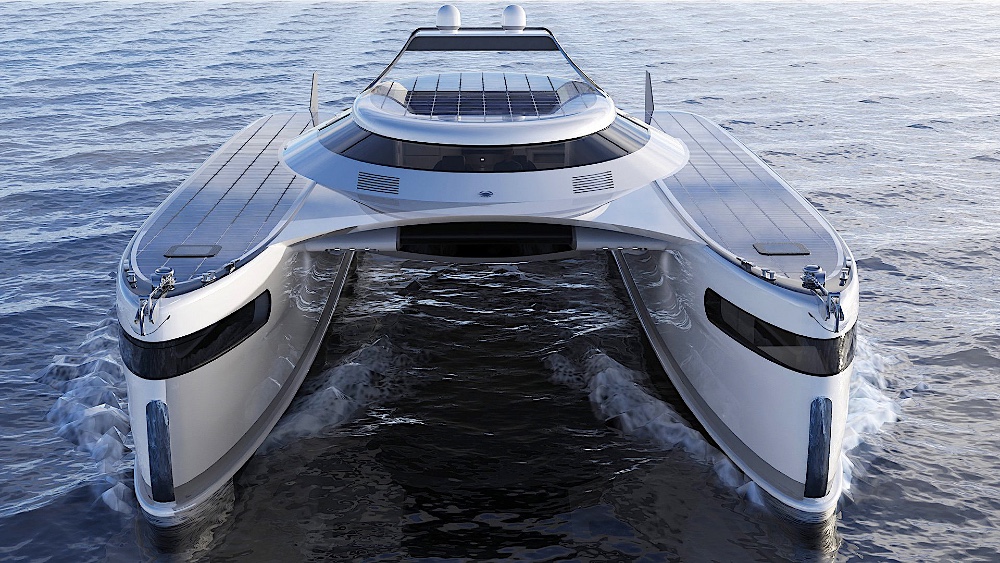 Why anchor your superyacht off that sugar-white St. Tropez beach, or Icelandic ice floe, when you could crawl right up on to it? That’s the thinking behind a bonkers new amphibious catamaran concept called Pagurus—Latin for crab—from the designers at Italian studio Lazzarini.

The key to the amphibious capabilities of this 82-foot mini-superyacht is the design of its twin hulls. Tucked away in recesses are four, 21-foot-long steel cylinders, each featuring a helical spiral flange that looks like the thread of some giant screw. Pull up to a beach and, at the touch of a button, all four cylinders drop down out of the hulls. With each powered by their own 440 hp diesel engine, the screws turn, biting into the sand, dragging the catamaran on to land.

“It would be the ultimate explorer yacht, with the ability to take you on to land as well as sea,” Pierpaolo Lazzarini told Robb Report.

Lazzarini’s original idea was for a military version of the catamaran. He even produced a rendering with camo paint and a rooftop canon. But seeing a huge uptick in luxury yacht buyers looking to “go off the grid” with friends and family, he felt a globe-girding private version with cabins for eight, would have real appeal.

One big attraction of Pagurus’s ability to crawl on to shore—apart from letting you see penguins out of your bedroom window—is to go exploring in your own 4×4. In this case, a Tesla Cybertruck.

“We imagined that it could be stowed on a platform between the hulls and lowered down on winches to the ground. The same platform could be used to hold a couple of electric Tesla Cyberquad ATVs, or snowmobiles,” he says.

And juicing-up the Teslas would be easy, courtesy of the huge banks of solar panels incorporated into the decks. Even the turning of the screw cylinders when the catamaran is under way is designed to help charge the batteries.

To get Pagurus to those faraway destinations, Lazzarini imagines the cat with a pair of 900 hp Caterpillar diesels coupled to sterndrives, giving a top speed of 25 knots.

Besides its multi-terrain capabilities, Pagurus is a modern mini-explorer design, with features like solar panels to provide energy.  Courtesy Lazzarini Design Studio

Want to cruise into that remote bay without disturbing the wildlife? Those underwater helical screws could turn under silent electric power to push the yacht at a stealthy five knots.

Lazzarini says his inspiration came from a giant crab from which the yacht gets its name. You see it in the high-sided hulls and low, low carbon fiber superstructure with its distinctive, slim semicircle of glass. Echoing a crab’s hard shell, Pagurus’s steel hull would be up to an inch thick with extra reinforcement around the bow for safe and effective ice-crushing.

The space-age feel of the interior can be changed for owners who might want something more contemporary.  Courtesy Lazzarini Design Studio

The designer understands he might get criticism for the environmental impact Pagarus might have, but sees the screw-drives as a safety feature for extracting the catamaran if it were to run aground or get stuck in mud. It can also pull itself on to land if the weather turns bad.

The Pagurus concept could be turned into reality for around $30 million. If you like the shape but not so much the ambitious screw-drive technology, a lighter-weight Pagurus, built of carbon fiber with water-jet power and a 32-knot top speed, could be built for around $8 million.