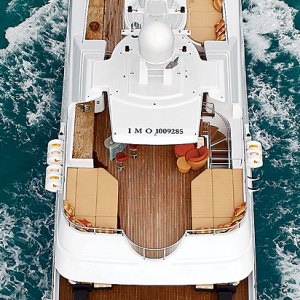 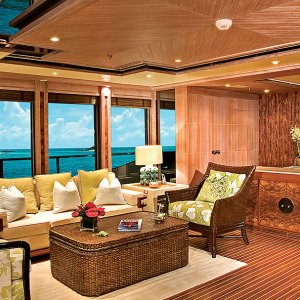 The proprietors of the 125-foot Hakvoort Perle Bleue previously owned the 148-foot Hakvoort Campbell Bay. Although the owners downsized, they did not have to sacrifice the bigger-boat features to which they had become accustomed. Designer Donald Starkey worked with the yacht’s owners to create Perle Bleue’s interior, which is much more intriguing than those of most similar-size yachts. The main salon, for example, features large murals showing partygoers in tuxedos and gowns, all images taken from a painting by Brazilian artist Juarez Machado. The master suite, on the main deck, is done in warm golds and bamboo, while light-colored woods lend an airy ambience to the guest cabins, located belowdecks. Many of the rooms seem larger than they are because of Starkey’s extensive use of mirrors.