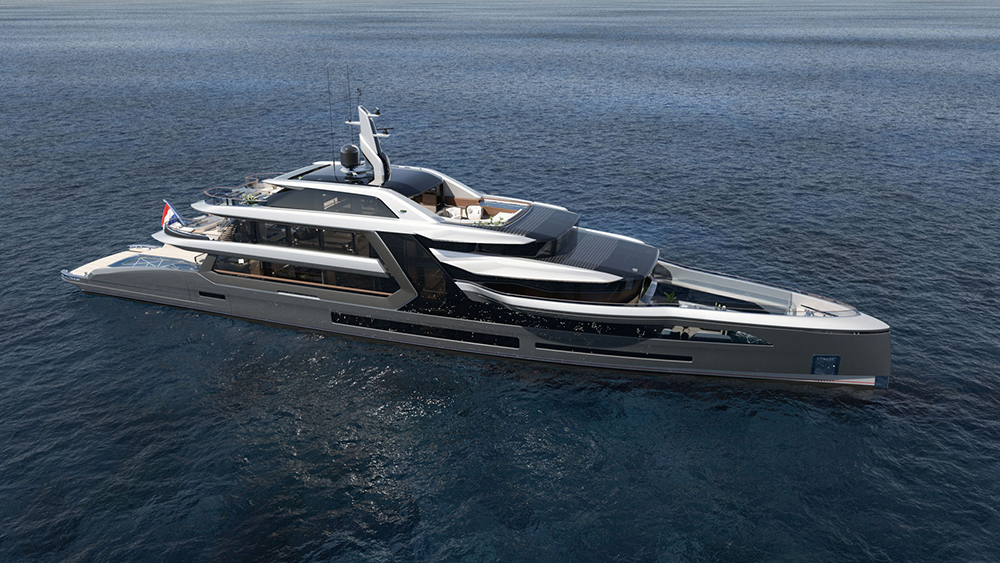 They say it’s what’s on the inside that counts, and that’s certainly true of Phathom Studio’s latest superyacht concept.

The striking vessel follows in the footsteps of the studio’s first concept Phathom-1, which the company revealed back in 2019. Like its 262-foot predecessor, the newcomer eschews the traditional layout of a superyacht in favor of elegant open-plan spaces and loft-like proportions. It was designed for a client who wanted to squeeze all the luxe amenities of Phathom-1 into a smaller, more nimble yacht.

At the heart of the new superyacht is a three-level indoor-outdoor atrium that spans from the main deck aft up to the sundeck. Its structural glass exterior, which is replete with geometric shapes and lines, not only makes a striking visual statement, but also allows plenty of natural light to stream in.

In a similar fashion, the split-level owner’s suite comprises large glass windows and a glass balcony that separates the bedroom from the dedicated lounge and study below.

Another highlight is the conservatory on the sundeck. Once again wrapped in glass, it comes fitted with an alfresco dining area, gym and spa that all offer panoramic views, of course. The glass floor, meanwhile, acts as a skylight for the central atrium below.

Elsewhere, the bow lounge, which is equipped with glass panels to protect seafarers from the elements, sports curved sofas ripe for taking in sunsets and a waterfall feature for added pizzaz. At the opposite end, the aft deck is crowned by a huge infinity pool with accompanying sun lounges. It’s also fitted with fold-out bulwarks for added space.

The vessel can store two tenders and features a large crane under the deck on the starboard side to help with launching.

Phathom didn’t share any details regarding propulsion, but, hey, who needs speed when you have style.