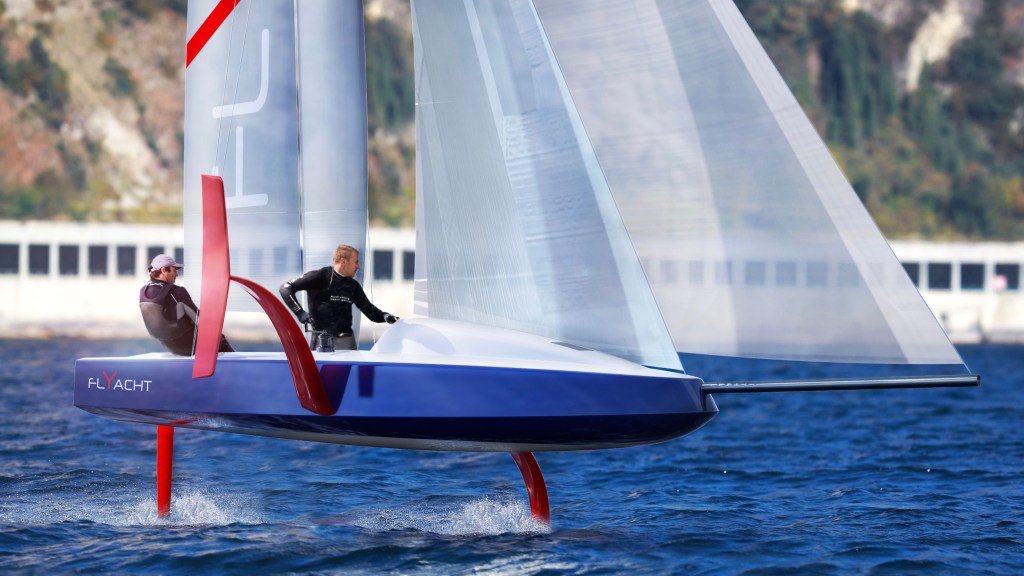 Designer Philippe Briand is known for coming up with some of the wildest, futuristic superyacht concepts (not to mention having designed many famous superyachts). But his new, small 21-foot Flyacht is aimed at a much larger audience of sailing enthusiasts.

The Flyacht was inspired by the new AC75 America’s Cup class, which will be the first racing monohulls ever with foils. Instead of plodding along as monohulls do, when the AC75 reaches a certain speed, the hull lifts out of the water on the foils for a heart-pounding race. The America’s Cup has raced super-fast catamarans with foils over the last three Cups, but never a monohull.

Briand has been lead designer in six America’s Cup campaigns over the years, but this much smaller boat is designed to be handled by a two-man amateur crew. Instead of a traditional sailboat keel, the Flyacht has two canting T-shaped foils for much faster speeds than a traditional monohull. It also has the very admirable ability to self-right if the boat capsizes.

The London-based designer said that scaling the 75-foot AC concept down to 21 feet was not just a matter of reducing lengths. Requiring a full review of every dimension, surface, weight, and lift, the Flyacht had to be completely re-engineered to suit the speeds, loads and safety that Briand’s team expected from the boat. If ever built, the Flyacht promises to be one of the most exhilarating raceboats in sailing.

The crew can hike (move their bodies out over the water to decrease heeling when sailing upwind) before the 10-knot “take-off” speed lifts the hull above the water on the foils. The Flyacht will be fast in fly mode, expected to reach 24 knots upwind.

The concept, designed for weekend sailors, could be built at a production shipyard. “Our role is to transfer the benefits of innovation from the racing sector to the wider market at a reasonable cost,” says Briand. “I want to introduce the millennium generation to how much fun and excitement can be had from sailing.”