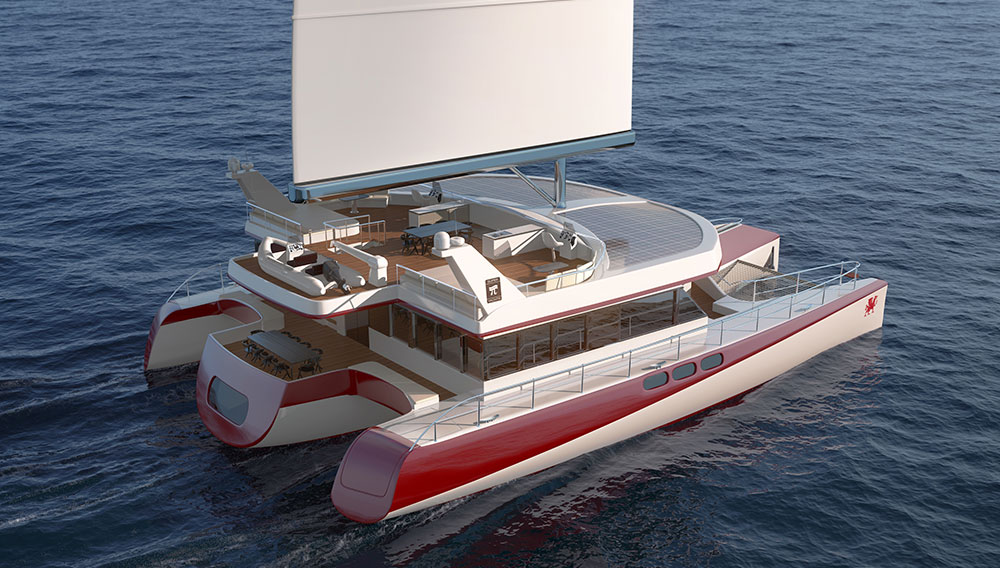 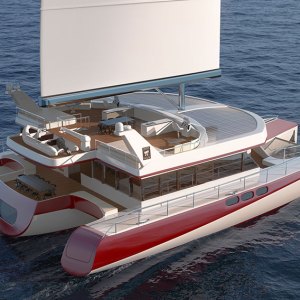 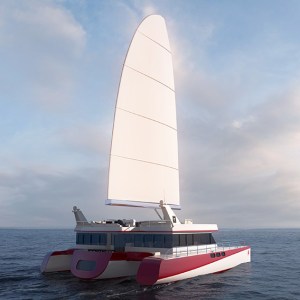 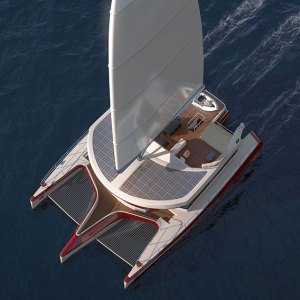 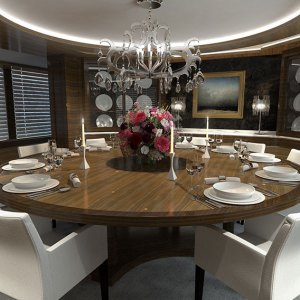 Pi Super Yacht’s Dragonship 25, an 82-foot trimaran concept that is nearly ready to enter production, was conceived to be an entirely emissions-free boat powered entirely by the sun and sea.

“We looked at many initial designs,” says Will O’Hara, CEO of Pi Super Yachts in the United Kingdom. “Ultimately, we decided to go with traditional, timeless styling for the yacht, while encasing the latest technologies inside of it.”

They include solar panels that are connected to the sail and hydrogenesis technology that draws energy from the ocean. “Basically, it takes seawater that has absorbed carbon dioxide from the atmosphere and, through a patented extraction process, filters monatomic hydrogen (H1) from the seawater in a sufficient volume to run a large fuel cell of 100 kWh constantly,” explains O’Hara. In other words, the process siphons the hydrogen from the water and runs it into fuel cells to power the boat. Solar power also provides constant battery power.

The result is a luxury yacht with comforts like air-conditioning and hot tubs, but without the need for vast reservoirs of diesel or gasoline to run the engines and generators. The trimaran design from Gillian Gray Naval Architects also delivers a gigantic 3,100-square- foot interior, with a generous master suite located on the center hull. Pi will customize the interior for the owners. The Dragonship 25 will have five staterooms for the owners and eight guests, and crew quarters for four—notable numbers for an 82-foot yacht.

Its most noteworthy feature is the Autosail rig, a wing sail that will work in synch with prevailing wind conditions, so that sailing is simplified. “All sail handling is fully automated,” says Jack Manners-Spencer, who has been designing wing sails since the late 1980s. “The airfoil-shaped battens, like formers on an aircraft wing, fit snugly around the mast, so that the sail and mast rotate together without any twist. It’s a very efficient design.” Under control of an automatic sail pilot, a DC motor rotates the mast to trim the sail for best performance.

Manners-Spencer, a former RAF pilot who flew Vulcan delta-wing bombers from 1964 through 1970, had been designing rectangular wing sails for about 15 years through the 1990s. It then occurred to him that the elliptical wing shape of the famed World War II fighter plane, the Spitfire, could also be used for sailing, “The Spitfire wing provided superior performance over the German fighters in WWII due to its significantly better lift/drag ratio,” he says. “The same effect is produced in a wing sail, especially when sailing close-hauled.” The elliptical shape of the Autosail is also much more graceful-looking than the mainsail on a typical sailboat.

O’Hara says that Pi Super Yachts is in the final stages of funding for the production of the Dragonship 25, which he expects to be completed in 2016. The company has also created plans for a 263-foot trimaran called the Dragonship 80, a three-masted vessel that features the Autosail and hydrogenesis systems, as well as a folding-wing keel that narrows its width for entering ports. Like its 82-foot sibling, it is designed to be completely emissions-free and self-sufficient. (pisuperyachts.com)