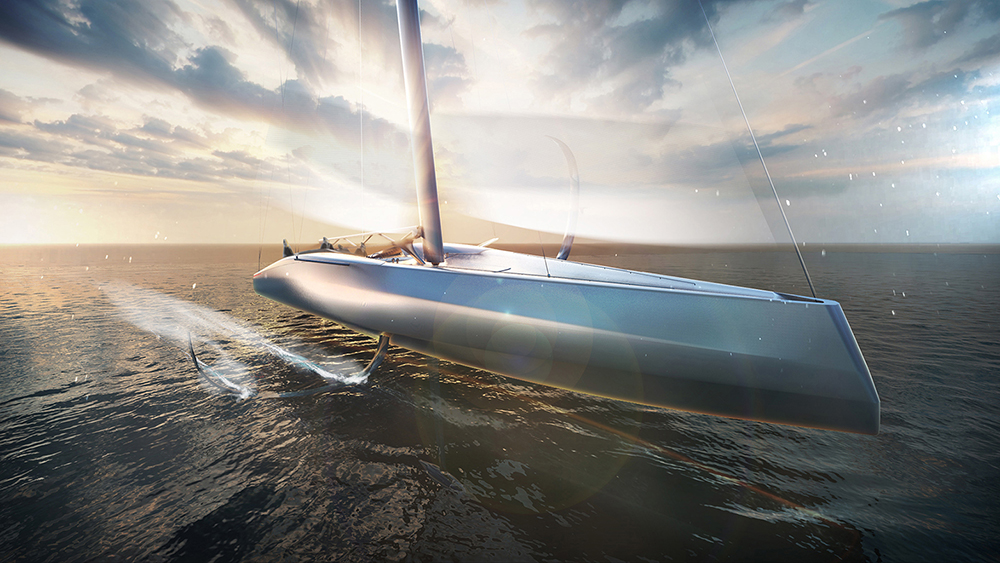 With high-speed foiling boats taking off in the marine industry—literally and figuratively—Pininfarina has decided to throw its hat into the ring with a futuristic new “flying” yacht.

Penned in collaboration with Persico Marine and Carkeek Design Partners, the new Persico F70 combines the latest tech with lavish living quarters in order to pull double duty as regatta racer and daysailer. Crafted from carbon composite, the lightweight 70-footer has been fittingly described as a hyperboat and has a sleek, aerodynamic silhouette that’s conducive to breakneck cruising. Think of it as the Pininfarina hypercar of the sea.

The full foiler features a set of innovative retractable wings along with elevators on the rudder blade that together allow it to fly across the water with minimal drag. According to the design team, this setup is similar to that of the AC75 foiling monohulls that recently competed in the 2021 America’s Cup. The formidable AC75s are considered the fastest and most complicated raceboats in the race’s history.

The interior of the F70 is decidedly futuristic.

Shawn Carkeek, who is the lead designer at his eponymous firm, claims the boat can reach full flight mode with only 10 knots of wind. The team didn’t give an estimated top speed, but said the vessel is “ultra-fast.” It will also be equipped with special software (CFD and VPP) to help with performance and handling. Since the foils are completely retractable, the F70 is a cinch to dock, too.

Onboard, the vessel’s interior is also at the bleeding edge and looks as though it’s come straight from a sci-fi. The open space is punctuated by a series of “structural rings” that Pininfarina’s chief yacht designer Daniele Mazzon says emphasizes the length and width of the boat. (They’re basically just a collection of fancy neon lights.) The furnishings are also suitably space age. Renderings show the interior with room for at least one double bed.

“On the F70, we have combined the hydrodynamic expertise of Carkeek with the aerodynamic know-how we have developed over the last 50 years in our own wind tunnel,” Mazzon added.

Pininfarina, the Italian marque best known for its high-performance sports cars, has previously designed a superyacht and gigayacht with Rossinav and Oceanco, but neither of those had wings.